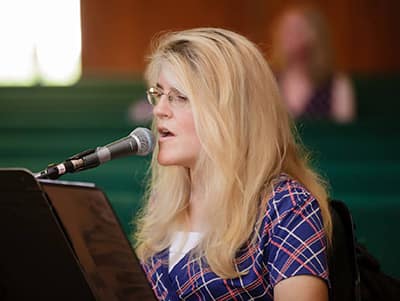 Singing is a passion for Maria Rinaldi ’00 of the Saint Michael’s Admission Office. The large photo behind the headline of this story shows Maria directing the Freedom & Unity Chorus that she founded, during a pre-pandemic concert in the College chapel.

Maria Rinaldi ’00, a Saint Michael’s web support specialist in the Office of Admission, has enjoyed singing recreationally and with her liturgical choirs for as long as she remembers.

During a time of social and political strife, she knew she wanted to merge her passion for singing with her passion for social justice, so in October of 2019, she founded Vermont’s Freedom and Unity Chorus without knowing what the next few months had in store for the world.

“I remember singing in church ever since I was young,” Rinaldi said. “I suffered an accident when I was 12 and I was paralyzed from the chest down. I remember saying ‘well the one thing I can still do is sing.’ So that led me on a journey of taking singing lessons through college.” As a Chittenden county native, Rinaldi remains active with the Saint Michael’s chapel liturgical choir that she joined at age 13.

A few years after graduating from Saint Michael’s in 2000, Rinaldi went on in 2008 to found and direct the Winooski Community Chorus, which was a community-based ensemble. The chorus would prepare for Christmas and pop concerts twice a year for family and friends to come and enjoy. After 10 years of directing the chorus, Rinaldi decided she needed to integrate her passion for social justice with her singing. “Music and social justice have been a part of my life forever,” she said.

Rinaldi’s late father, John, is also a Saint Michael’s alumnus, having graduated in 1966. The summer before his graduation, Maria Rinaldi said, her dad went down to Elizabeth City, NC, with Edmundite priest (and later Detroit Auxiliary Bishop) Rev. Moses Anderson, S.S.E.’54. There, Anderson and several students taught Black students for six weeks, preparing them for higher education testing. Rinaldi recalls stories that her father told of this trip that inspired her and informed her of the social inequities that existed in the country.

The late John Rinaldi ’66, father of Maria Rinaldi, teaching in Elizabeth City, NC, with the Edmundite Southern Missions during his student days.

“My dad would tell me stories of his time in Elizabeth City and how he and his classmates were treated badly by other whites for the work they were doing,” she said. Rinaldi also remembers meeting Moses Anderson when she was about age 10; “I remember being so mesmerized by him. He would play his guitar and we would sing together,” she said. “Those were my earliest memories of social justice and music.”

Another figure in Rinaldi’s life who imparted the importance of social justice was her Spanish adviser at Saint Michael’s, Professor Marta Umanzor. “[Umanzor] worked with Bishop Oscar Romero who was assassinated in El Salvador for [speaking out against social injustice and violence]. Listening to her stories contributed in large part to my knowledge of the social injustices in Latin America,” said Rinaldi. “[Umanzor] also introduced me to the work of Víctor Jara, a Chilean folk singer who worked with Salvador Allende, the former socialist president in Chile. Allende died under suspicious circumstances in 1973, while Jara was tortured and killed during the Pinochet dictatorship. Rinaldi did an entire recital that consisted of Jara’s songs during her senior year at Saint Michael’s to commemorate his story.

While directing the Winooski Community Chorus in 2016, Rinaldi was inspired to get into politics by her interest in Bernie Sanders and his beliefs. After volunteering for Sanders’ campaign, she decided to run to be a delegate. “During that time, I got more of a back door look into some of the shenanigans that go on in politics and I decided it was just too much pressure for me. So instead, I asked myself what I could do that’s positive and would actually affect and change people’s lives,” Rinaldi said.

Rinaldi’s “behind the scenes” look into the political scene was not the only driving force that birthed Vermont’s Freedom and Unity Chorus. In 2019, Rinaldi had been directing the WCC for 10 years. “Trump and his administration were in power and it was a time of great division,” she said. “We had people being told that they don’t belong here, we had the Muslim ban, and we had congresswomen being told that they need to go back to their own country when they were in fact American citizens.”

For these reasons, Rinaldi said that she wanted to create a peace and unity chorus that would not only uplift people but also ignite change in the community. “I wanted to create a safe space where people could come, no matter their age, race, color, gender, gender expression, sexual orientation, or disability to feel safe and feel welcomed,” she added.

After Rinaldi founded the chorus in the fall of 2019, the group had reached around 60 participants. Shortly after the start of the chorus, the COVID-19 pandemic came and started affecting community events, so the club had to move to the Zoom platform to meet. However, Rinaldi recalls having a difficult time singing as a group over Zoom due to time lags. She said that it ultimately became more about community — it was more of an activity to keep the members going during the pandemic.

Many participants had a hard time meeting with the chorus over Zoom due to personal concerns or responsibilities that became more important at the time. “I had a core group of about 15 people who would meet weekly over Zoom and we’d just check in to make sure everyone was doing okay and then sing some songs to uplift our spirits,” Rinaldi said. After the vaccines came out, a small window opened up that allowed the group to sing in person and perform at the St. Albans Community Rally for Togetherness in July of 2021. Rinaldi said that performance was a turning point for the chorus as they were finally able to live out their mission, and it motivated them to want to perform more, something they are planning to do this summer through a series of outdoor concerts.

Rinaldi’s overarching hope with Freedom and Unity Chorus is that more people join. “I’d like to make this into a movement, really,” she said. The chorus has been a heartwarming and community building experience for Rinaldi, something she hopes to share with members of the choir and the greater community.

“While I might not be able to change the world, I hope to make it a better, more welcoming place to be,” she said.

Maria Rinaldi is at home in Vermont.