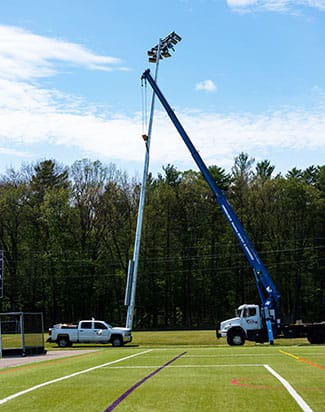 Chasing daylight will no longer be a concern of Saint Michael’s College athletics with the recent installation of new high-tech LED lights on the Duffy Field. The lights will not only extend playing time options for games, but also offer a better practice schedule for athletes.

Christopher M. Duffy Field, often referred to as “The Duff” or just “Duffy” by many students, is the home of the men and women’s lacrosse teams, men and women’s soccer teams, and field hockey team at Saint Michael’s College. The Duffy Field serves over a hundred student athletes through the fall and spring seasons and spans 370 feet by 220 feet. The surface is synthetic turf made of rubber infill, an eco-friendly product.

Lights in boxes just prior to installation

For more than 15 years the field has served the Saint Michael’s athletic community well, and this summer it is getting a huge upgrade. The installation of state-of-the-art LED lighting system was completed at the start of July. Controlled by an app, the lights are a highly economical and efficient addition to the Duffy Field.

Director of Athletics Chris Kenny ‘86 praises the new light installation as a massive enhancement to the athletic program on campus. “Darkness starts to fall early here in Winooski Park in fall, winter, and spring,” he said, “The lights provide us the flexibility to work around academic conflicts and extend practices and games into the evenings.”

Though the Duffy Field is specifically used by the five varsity teams listed above, the lights will also provide Saint Michael’s baseball and softball teams additional opportunities to use the field for practice. When asked how many teams will get to take advantage of the new lights, Kenny said, “At least seven— our coaches are pretty creative, so other programs might find ways to utilize the field for training when it is available.”

Kenny expressed excitement for the opportunities that the new lights will provide for the larger student body – that is, the potential student activity use of the Duffy Field as well as the field’s new ability to host outside organizations. Additionally, Kenny said, “We think the atmosphere of night games will be a fun enhancement for our campus community— we look forward to hosting them.”

The Christopher M. Duffy Artificial Turf Field hosted its first Saint Michael’s sporting event on Aug. 31, 2005, before being officially dedicated on Oct. 22, 2005. Construction began and was completed during the summer of 2005 on the $1 million synthetic turf field and was made possible due to a generous lead gift by John and Kathleen Duffy, parents of Kevin Duffy ’03, a four-year member of the Saint Michael’s men’s lacrosse team. The gift was made in memory of Kevin’s older brother, Christopher, who died during the September 11, 2001, attack on the World Trade Center in New York City. John Duffy has been a member of the Saint Michael’s Board of Trustees, and also served on the Visions Campaign Steering Committee.

In the summer of 2015, the field received a new state-of-the-art synthetic surface, Legion 46, through Shaw Sports Turf (Calhoun, Ga.). The College was the first among 15 institutions in the Northeast-10 Conference to utilize Shaw to install the eco-friendly Legion turf, an ideal surface for the sports that use the field.