Many College groups use beautiful facilities in Champlain islands for retreats and other programming; Edmundites presenting summer reflection series there as well 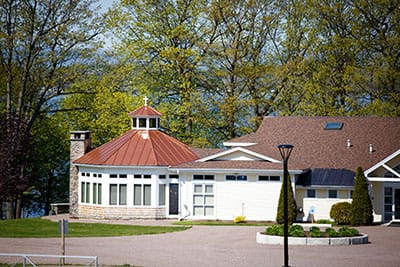 The Boucher building at St. Anne’s Shrine is a central location for gatherings of Saint Michael’s groups who use the facility on retreats.

Saint Anne’s Shrine is well-known in the Catholic community in Vermont as well as among the student body at Saint Michael’s College. Recognized by many in the region as a place of spiritual renewal, the Shrine became a place for Saint Michael’s students to go on retreats starting in 2013, though its history reaches back to the 17th century, with the Edmundites and by extension Saint Michael’s entering the picture more than a century ago.

This coming Mid-August through Thanksgiving, the Shrine is scheduled to host many groups from the College such as Orientation Leaders, Resident Assistants, athletes, and various Edmundite Campus Ministry retreats.

The addition of comfortable cabins for overnight visitors about a decade ago made such events possible alongside the pleasant group gathering areas and a cafeteria in the modern and upgraded Boucher building, named to honor the late longtime Shrine Director Fr. Maurice Boucher, S.S.E. The Shrine also features beautiful Lake Champlain waterfront facing New York state, an outdoor pavilion and chapel for Mass, a gift shop and various devotional areas.

This statue at the Shrine is of St. Anne and the young Blessed Virgin Mary.

Saint Anne is the grandmother of Jesus, mother of the Blessed Virgin Mary. Saint Anne is a venerated saint among the French and is patroness of women, mothers, grandmothers, and educators. The location of Saint Anne’s Shrine was once the home of Fort Saint Anne, established in 1666 as a French outpost and was the site of the first Catholic Mass celebrated in Vermont.

Fr. Brian Cummings and a new bilingual sign at the Shrine last year.

The Society of Saint Edmund formed in 1843 in France where the devotion to Saint Anne was prominent. The Society of Saint Edmund formed because they wanted to encourage Catholics to participate more fully in the Church at a time of anti-clerical sentiment in France. The Edmundite community’s ministry is focused on evangelization through education, spiritual renewal, and social justice.

The Diocese of Burlington was established in 1853, and in 1892, fundraising allowed the land of Fort Saint Anne to be purchased by the diocese in order to preserve the history. A small chapel was built on the land shortly after the purchase of the property. Though the Fort was destroyed sometime between 1670 and 1690, the Way of Calvary at the Shrine marks the place where the Fort once stood. Nearly 2,000 people participated in the first pilgrimage to the Shrine in 1893 for the blessing of the chapel.

In 1904, Bishop John Michaud asked the Society of Saint Edmund to institute a Catholic college in his diocese and take on administration of Saint Anne’s Shrine. Thus, Saint Michael’s College was established.

Mass at the Shrine under the pavilion often attracts good-sized crowds, as here.

“It’s nice to bring students off-campus,” he said, “to a place where they get to reflect on their life’s purpose as well as God in their lives.” Cummings’ favorite part of the Shrine as a part of Saint Michael’s student life is the programming it provides, as well as the sanctuary it offers students among the hustle and bustle of campus life. The beautiful sunsets are an added bonus, said Cummings, who stays some of the summer at the Shrine in a small residence constructed by the shore there in recent years.

The Shrine is a fun getaway for students because of its atmosphere of spirituality, reflection, fascinating history, as well as the Edmundite presence. Students who go on retreats to the Shrine often have structured activities led by Campus Ministry. Though the retreats are unique to each group, athletes can expect a campus minister’s talk on a spiritual topic, team building exercises, discussions about social contracts, personal and team goals, campus living, and more. Cummings’ favorite spiritual talk to give to students is on vocations, he said.

This summer, several Edmundites in residence at Saint Michael’s are offering a series of presentations at the Shrine. For the first in this summer Reflection Series on July 6, for example, a good-sized group joined the daily Mass followed by the day’s talk and a delicious lunch in the Shrine cafeteria. About 50 visitors heard an interesting and informative presentation by Fr. Michael Carter, S.S.E. ‘12, on “Sainted Women of the Dark Ages.”

Prior to 2013, many Saint Michael’s students never heard about Saint Anne’s Shrine, but with the construction of the new facilities, many students and alumni have visited. As a result, Cummings is seeing an influx of requests for weddings and baptisms from Saint Michael’s alumni. “There is a revolving door of Saint Michael’s people at the Shrine,” said Cummings.