Day or overnight offerings for boys and girls include basketball, lacrosse, soccer, baseball and field hockey 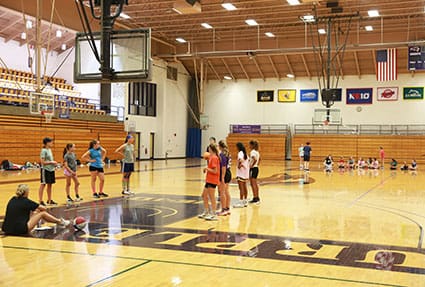 Action at a recent girls’ basketball camp in several of these photos. (Will Coppola ’23)

While the majority of students are away for the summer, Saint Michael’s College is still bustling with life as it assumes the role of host for many activities and organizations, including 13 youth summer sports camps.

For as long as many can remember, Saint Michael’s has been hosting both day and overnight summer sports camps. While mostly Vermont athletes attend the day camps each year, the overnight camps tend to draw athletes from out-of-state as well.

With six men’s sessions available for lacrosse, basketball, soccer, or baseball and seven women’s sessions available for basketball, lacrosse, soccer, or field hockey, at least one camp will run at the College each week from June 13 through August 5 this year. Most sports will offer two camp sessions that are either divided by age (as the camps typically invite elementary through high school-aged athletes) or run with all ages together.

Coach Carla Hesler has been leading field hockey summer camps for many years.

Camps mostly occur during the day from 9 a.m. to 3:30 p.m., with the exception of field hockey, which has one overnight session from July 7 through 13. At the overnight, participants will attend either two or three two-hour-long sessions, depending on the day. According to head-coach Carla Hesler, the overnight session is for experienced players, while her day camp is largely for athletes who are newer to the sport.

At the day camps, coaches combine activities such as skill drills, scrimmaging, contests, time in the College’s pool, lunch in Alliot, and an introduction to fitness and body strength. Coaches also invite both current and former players from Saint Michael’s College and former Vermont high school players who now play for colleges out-of-state to help run their camps.

Given the strong community of college athletes and coaches who help organize the Saint Michael’s camps each year, the consensus among coaches is that the camps are largely for recreational purposes rather than recruiting.

Free throws and an audience of peers at a recent girls basketball camp.