Graduate focus was race and ethnicity; now she is peer tutoring and learning support specialist back at Saint Michael's 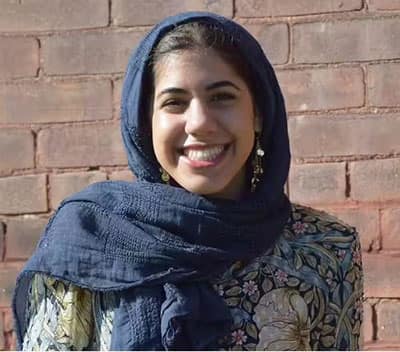 Alsaffar is from South Burlington, VT, and graduated from Saint Michael’s College with a bachelor’s degree in sociology in the spring of 2020. Though her graduation was marred by the coronavirus, her ambition was not. At McGill she focused her sociology master’s studies on race and religion among the Muslim population in the United States. “I never used to think about the ways that my identity as a Muslim woman play a role in the society I’m living in,” she said, “The more involved in sociology I got, the more I was able to understand how systems around me worked.”

Her choice to attend Saint Michael’s as an undergraduate was informed by her desire to remain in-state so she could be close to her family. “I ultimately chose St. Mike’s because I preferred going to a small liberal arts college,” as opposed to the large college culture of the University of Vermont, she said.

She originally entered undergrad as a psychology major because of her desire to work with people, but once she took an anthropology course with a former Saint Michael’s professor Patricia Delaney, her direction of study changed forever. Alsaffar changed her major to sociology soon after her course with Delaney. “I became passionate about the study of people, cultures, and society,” she said. “Later on, I participated in an independent study with [former Saint Michael’s sociology] Professor (Robert) Brenneman on the sociology of religion and used that course to develop an independent research project on the role of race and ethnicity in Vermont’s Muslim community.”

Former adjunct Professor Maya Bhave’s Race and Ethnic Relations course in the Saint Michael’s Sociology/Anthropology Department had a huge impact on Alsaffar’s interest in sociology as it pertains to race. “Although the class was incredibly challenging, I was passionate about the subject and was willing to put in the work for it,” she said.

Sociology inspired Alsaffar to do the independent research project with Brenneman on the role of race and ethnicity in the Muslim community in Vermont her junior year, which ultimately gave her the tools she needed to feel prepared to apply for graduate school. “I’m grateful that I was still able to seize the opportunity to conduct my independent research in person and present my findings—had it not been for this project, I probably would not have found that passion for research to apply to graduate school,” she said.

She based her choice to attend McGill on the sociology program that focused on race and ethnicity, professors who have done research on the topics Alsaffar was interested in, as well as its proximity to home. She originally applied for the PhD program and planned to be a professor of sociology in the Middle East; however, she made the hard but what feels now like the right choice to “master out” of the PhD program in order to gain life and work experience outside of the classroom.

She knew she wanted to remain in the academic world, so following her graduation from her master’s program, she applied for the job as Coordinator of Peer Tutoring and Academic Support at Saint Michael’s College. She expressed her gratitude towards the Academic Enrichment Center and Academic Affairs team “for the opportunity to showcase my skills and efforts and believing in me even though I’m a young applicant who just got out of college.”

She recognized the advances made by the College through the recent hiring of Sarah Childs as the director of the Center for Multicultural Affairs and Services. “I can definitely see a change in the way students are utilizing the Center and feeling comfort in it as compared to when I was a student,” Alsaffar said.

Alsaffar’s study of sociology rests on some uncomfortable topics, but she believes that understanding the world and society is more important than avoiding uncomfortable conversations. “I think there is an importance in acknowledging what can often times feel uncomfortable,” she said, “Whether it’s recognizing your own place in the world or understanding the ongoing list of social problems, conceptualizing interactions between others and their institutions is really something that’s eye-opening.”