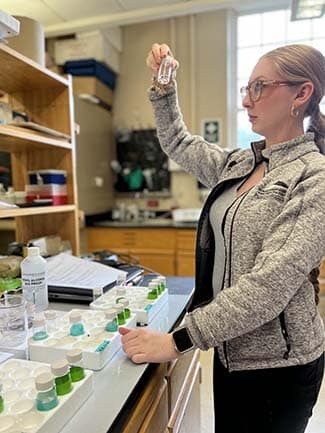 Taylor Galgay ’24 works in the lab during her summer research experience recently.

For much of the summer Saint Michael’s College will house approximately 25 student-researchers as they explore specific questions within a wide variety of topics ranging from spiders to poetry.

One example of the multidisciplinary research projects occurring on campus this summer is rising junior Taylor Galgay ‘24 of Windsor, VT, who will work with five other student-researchers alongside faculty mentors Ruth Fabian-Fine and Adam Weaver to explore questions about the nervous systems of spiders and the effects of ethyl alcohol on flatworms.

In the future, Galgay hopes to pursue medical school and believes that her experience with summer research at Saint Michael’s will serve as an invaluable asset on her applications.

Galgay, a neuroscience major with minors in philosophy and public health, said her research this summer is twofold: As one aspect she will be joining the ongoing research of neuroscience and biology Professor Fabian-Fine, whose spiders used in research are well-known around campus. Each year student-researchers examine with Fabian-Fine a new question pertaining to the neurology of these spiders. This year, they will examine the changes in the ganglia, a mass of nervous tissue that connects neurons to the muscular and sensory systems after removal of a limb.

“There have been experiments done with raccoons where each digit connects to a part of the brain, then when a digit is removed, the neurons for that digit obviously die, but compensatory neurons take over and help to make up for the loss of the other digits. So similarly with the spiders, we are studying what happens with those neurons to see if there’s compensatory actions going on, or if the neuron dies, or if it goes somewhere else,” Galgay ‘24 said.

As the second component of her summer research, Galgay ‘24 also will study the effects of ethyl alcohol on the regeneration of flatworms. Flatworms are a species of aquatic invertebrate that have the ability to regenerate on both ends when cut in half. “The anterior end, the head, will generate a new tail, and the posterior end, the tail, will generate a head,” she said.

Knowing this, the researchers will place the halved flatworms in varying levels of pure ethyl alcohol. They want to examine if and how the alcohol inhibits regeneration of cells. They have already conducted basic experiments that indicate the alcohol does indeed inhibit cellular regeneration, but now they want to examine these effects on a larger scale and with a greater sample size to determine with more certainty if there is a statistically significant change.

“What we’ve seen is actually this divot in the alcohol. So not only was the flatworm not able to regenerate, but it actually collapsed in on itself,” Galgay ‘24 said. “So we’re thinking that chronic exposure to alcohol inhibits cellular regeneration and hopefully we can connect it to humans.”

Professor Ruth Fabian-Fine and her spiders.

Galgay believes that this research with flatworms will have a strong impact on the study of chronic alcohol exposure and alcoholism in humans. “I think it’s not only something that should be considered for older adults who have had years of alcohol exposure, but important for college age or young-adults as well who are maybe just starting their drinking experiences,” she said.

Especially for college-age adults where binge drinking is so strongly embedded in the culture, Galgay, she hopes that this research could help young adults to become more aware of the risks and long-term effects of binge drinking – “Just really making sure that you know the risks so that way you are fully consenting to your activities,” she said.

Galgay also encouraged all students who are interested in participating in research to apply. “It’s a lot easier than you think and the professors really meet you where you’re at,” she said, “If you have a lot of prior lab experience that’s great, but I came in having minimal lab experience and I’m still doing awesome. The mentors make sure that no one is falling behind — it’s very much a team effort.”

She also said she has found the experience to be extremely accessible and welcoming for those with disabilities. “I have multiple physical disabilities and I’ve found that it is a disability friendly space. If students are concerned about any type of hearing impairment or if they are a wheelchair user, the lab is accessible. Ruth has made sure that everything is accessible for me,” she said.