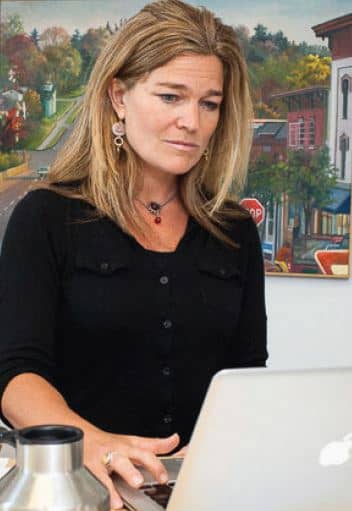 Susan Randall, a licensed private investigator for over 23 years in both Vermont and New York, visited Saint Michael’s College to discuss her circuitous career path and offer advice for current college students who might be considering her profession for themselves.

Randall began her March 24 presentation in the Cheray 101 lecture hall at the invitation of the criminology program and Professor Krista Billingsley by asking how many students in the audience were planning to major in criminology. To her apparent surprise and delight, over half the room raised their hands; by contrast, Randall said that when she was in college she “had no idea” that her current job even existed, much less knowing the best major to prepare for it.

Upon receiving her undergraduate degree from Brown University in international relations and modern culture and media, Randall’s initial goal was to become an investigative journalist. Early in her career, she received an internship with the United National, a desk assistant position for the MacNeil/Lehrer News Hour in New York City, a position creating short documentaries for a show called Biography, and a position with the BBC for a show called Correspondent.

After these experiences, however, Randall realized that she no longer wanted to live in New York City, so she came to Vermont to reinvent herself. She got a job working for Vermont Public Radio (VPR) where her career took an unexpected turn.

Randall said that while working for VPR, she visited a small town in Vermont to interview an elderly man with mobility issues who planned to convert an old school bus into a repair shop and drive it to Florida.

After speaking with the man, Randall hoped to get a soundbite from the teenager who was installing a wood stove in the soon-to-be repair shop. She began her trek across the man’s property despite her highly professional urban attire, being so recently from New York City, she said. When the young man saw her coming, however, he broke out into a sprint.

“Being so young myself, naturally I started running after him,” Randall said, “And when I caught up, he instantly began confessing to a murder because he thought I was with the police.”

In disbelief that she now had an unsolved murder confession on tape, Randall returned to VPR and wrote her new story. Although it was not overly popular with VPR, the story prompted a call from a local private investigator inviting Randall to come train and work with her.

Since taking her first job as a private investigator, Randall said, she has learned to place equal value in fact investigation and “mitigation.” For her the term means taking into fullest account the often challenging life circumstances that impact outcomes for the subjects of her investigations.

Through this distinctively personal approach to her work, Randall simultaneously investigates the circumstances that ultimately lead to a person’s crime in addition to the facts of the case. She said she attempts to understand and explain the disadvantages that her clients are born into, whether that be addiction, violence, absent parents, poverty, and so on.

Drawing from her experience in journalism, Randall has found a niche on the mitigation side of investigation through creating sentencing videos and mitigation packets about the intangible aspects of her clients’ lives to show during trials.  “I pride myself in my job to make judges toss and turn at night,” she said.

During her presentation, Randall played her client Anthony Johnson’s successful sentencing video for the audience. The video posed multiple written questions about Johnson’s character, history, and why his sentence ultimately should be reduced. In response to each question, she included visual testimonies from Johnson’s family, friends, and girlfriend. After showing the video in court, Johnson had his sentence reduced from 12 years to only 6 years.

To conclude her presentation, Randall offered advice to the audience, all students who are only few years away from beginning their own professional careers. Randall attributes much of her success to her background in “soft sciences” and following her interests, so she advised students to do the same in studying a broad range of topics in their liberal arts educations.

“All these people kept saying that I was never going to get a job with those skills, but I’ve found that’s really not true. I have found them to be extremely relevant to my job. I work with poverty, mental health, and trauma every day,” Randall said, adding, “Follow what’s interesting, and the money will follow.”