At invitation of campus groups, Winooski lawmaker describes overcoming challenges to become one of 7 openly transgender state legislators in the country 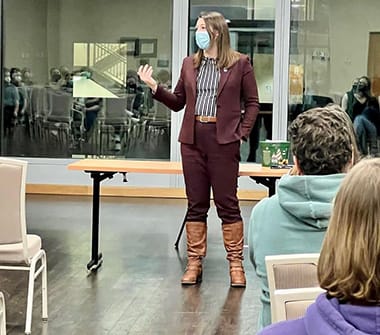 The campus Feminist Club and the Center for Women & Gender as well as Common Ground and LGBTQ Housing sponsored this event. Laughter filled the room in warm response to Small’s wit as she told attendees how her work in the State House representing Winooski intersects with modern day feminism.

Small grew up in western Massachusetts and said she endured bullying at school because of her “effeminate” presentation. With no queer representation in the area in which she grew up, she faced bullying for being “gay,” even though she had not come out at that time, Small said.

The harassment grew to a point where her family decided to move to Johnson, VT, and have Small enroll in Colchester High School. Small recalled that while people at Colchester sometimes asked if she was gay, the dynamic was markedly different from when the bullies called her gay at earlier schools. “Curiosity was the leading piece,” she said of her Colchester experience. Small said she came out as gay her senior year of high school.

Small enrolled at the University of Vermont intending to become a doctor but hit a roadblock when she took organic chemistry… twice. She described having a “mid-college crisis” and asking herself, “How am I going to help people now?” Small ended up switching majors and graduated in 2016 with a bachelor of science in human development and family studies with a minor in gender identity and sexuality studies. She shared that during her time at UVM, she took several classes about identity relating to queerness and race, and she came out as transgender when she graduated from college.

She began her career working with adolescents in the mental health field in Franklin County, notably one of the few counties in Vermont that consistently votes “red,” she said. Small recalled how being in that workplace “did not affirm [her] identity,” and was a huge struggle; she did not care so much about her clients being affirming of her identity because her relationship with them did not necessarily make it directly pertinent to their interactions professionally, yet they were the only ones who ended up being affirming of her identity.

Small said her coworkers would ask her why she had “all the gay clients,” and she responded, “Maybe it’s because they found someone who’s safe… you have LGBTQ clients, they’re just not coming out to you.” Small became increasingly uncomfortable at her job and eventually quit with no other job lined up. During the application process, she found that she was consistently told that she did well in the interviews, but that she “wasn’t the right fit,” which to her was coded language for, “we can’t support an out trans employee at our organization.”

Her political journey began in the midst of the COVID-19 pandemic. Diana González, a former Vermont state representative for Chittenden County, called Small while Small was in full drag in her living room about to give a Zoom performance as her drag persona, Nikki Champagne. Small recalled González saying, “I have a political question,” to which Small replied, “I’m not very political, but I’m happy to help.” González then said, “I think your voice is really needed in the State House.” Within 36 hours of that phone call, Small launched her campaign.

Throughout her campaign process, Small realized the importance and “impact of identity,” because before Small’s election in 2021, the U.S. had only three out transgender representatives nationwide. Four more, including Small, were elected in 2021. “It was a wild time, but a very important time,” Small said about the atmosphere in which she was elected. Contributing to that wild feel of that time was that Small’s swearing in was the day of the January 6 insurrection in the nation’s capital, she said.

Being new to the role of legislator, Small worried people would not take her seriously and that she would just be “seen as a singular identity,” but her committee did not disappoint her. She said that she has been misgendered in the State House, but she knows it is not malicious because every time it has happened, people genuinely apologize.

Her experience has been very different from the experiences of many other out trans representatives across the country, who report that people literally pretend not to hear them when they speak. By contrast, Hall feels very supported by her committee at the State House, especially by the other newly elected women legislators, even though Small initially was not sure if she always would feel heard.

Small said the first bill she put forward was the LGBT Panic Defense bill, which states that a person’s LGBTQ identity can’t be used against them as a defense for an assailant. When she put the bill forward, the Judiciary Committee took it up very quickly with Small invited to be an honorary member during the discussion, and the bill passed in the State House with near unanimity.

The bill then proceeded to the State Senate where Small joked that it ran into issues due to “hypotheticals that only legislators could dream up.” The Senate committee provided Small an honorary seat for the discussion as well, and the bill passed unanimously

“Representation matters,” Small said, “and telling my story had an impact for folks.” The bill went back to the House with some tweaks and passed. The governor signed the bill, praising it for its bipartisan support. Small’s biggest reason for putting the bill forward was that she “knows the statistics for violence against trans folks,” and wanted legislative protection for LGBTQ people. “My identity is not a defense for someone else committing an offense against me,” Small said.

Small ended her talk by addressing the audience and reminding them that the “impacts that you will feel as a resident in any of your communities are on the smaller tickets.” She reminded that elections on the local level such as the city council race and the state Legislature and Senate elections are important. Small concluded by sharing that for marginalized people, especially women, it takes an average of up to seven people asking them to run for public office before they finally decide to do it.  “Let me be that first ask,” she said, while also urging her listeners to never let the number of “asks” that they receive urging them to pursue public office ever get to seven, if that is something they really want.