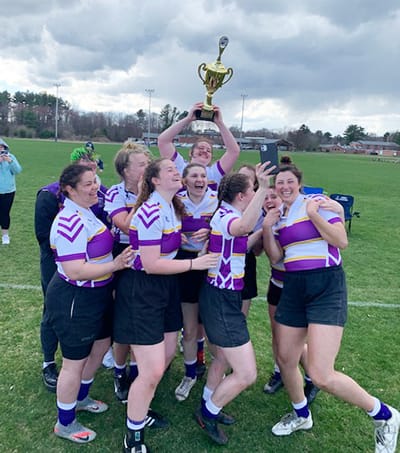 The Saint Michael’s women’s rugby club team became champions of the Rugby Northeast Division II “sevens” tournament on April 9 at Stonehill College, beating Colby College for the title after going undefeated at 5-0 at the championship tournament. Their road to the title over a long day included victories over such competitive schools such as Stonehill, Colby, Emerson, University of New England, and Southern Connecticut State University.

Women’s Coach Charles Cisco explained the two styles of rugby — the more common and traditional version with 15 players on a side, and this variation known as “sevens” with only seven per side — and how they break down in seasonal play for the Saint Michael’s women’s and men’s squads.

“The women are a member of the Rugby Northeast Conference. The conference runs two competitive seasons. Rugby fifteens is our fall competition, which runs from August to November.  Rugby fifteens – generally just called rugby — runs the competition as a traditional sport, playing a game weekly and culminating in a record to see if you qualify for playoffs,” Cisco said. “Rugby sevens is our spring competition. The Rugby sevens competition consists of a number of tournaments that culminate in a conference tournament played on one day to crown a champion, which is what happened April 9 at Stonehill.” He explained that the sevens season runs from February through May. “The men are a member of the NEWCRC conference, and they run their competitive seasons in parallel with the women,” said Cisco.

The evening before the Stonehill tournament, the women’s rugby team piled into a 15-passenger school van. The van lacked a trunk, forcing the 13 girls and their coach to pile their overnight bags, rugby gear, and boxes of food on top of their laps. The team ventured out of Vermont, through New Hampshire, and down into Massachusetts in the evening until they finally arrived at a hotel near Stonehill College in Easton, MA.

Emily Krumm ‘22, an environmental science major with a religious studies minor from Cornwall, NY, said, “In the morning we were all so eager to play and get the day going since the night before had been so long.”

The tournament team poss together sporting the purple and gold.

The day started with one game in the morning, followed by a break where the team got to see their families, eat some snacks, and chat with some rugby alumni who came to support the team, said women’s rugby team president, Sophia Tedesco ‘24, a business and political science double major with a minor in religious studies from Rutland, VT. The team then played three more games, followed by another 30-minute break before moving into the playoffs.

The championship was a series of  “sevens” games — a style of game that differs from the traditional “15s” rugby game. A fifteens game consists of two 40-minute halves with 15 players on each team. Players one through eight are considered the “scrummies,” which are forwards who aim to get possession of the ball. Player nine is the intermediary between forwards and backs. Players 10 through 15 are backs who aim to pass the ball and move much quicker than the forwards.

A sevens game is much different with the most prominent difference being the playing time and number of players on the field. In a sevens game, each team has seven players and they play two seven-minute halves. This kind of game is much faster-paced and less formal since all players have the simple assignment of doing what they can, rather than having a specific duty.

Katie Mahoney ‘22, an economics major with a double minor in business administration and religious studies from Walpole, MA, said that she prefers sevens games over fifteens. “I enjoy the format of playing multiple games in one day, especially with such a young team —  it’s helpful that we can play a game, debrief and talk, then build off what we need to work on during the rest of the day,” she said. Mahoney is proud of the younger members of the team who have not had as much practice in playing 7’s games but were still able to succeed at the tournament.

As a senior, Mahoney recalls the time she was able to attend this exact tournament during her first year at Saint Michael’s, in the spring of 2019. Mahoney believes she is one of the only people on the team who has attended a sevens tournament before, since COVID restricted the team from participating in tournaments over the last two years. “The tournament was such a full circle moment for me. The first and last tournament I’ve participated in as a rugby player here is this same sevens tournament,” said Mahoney.

The seniors on the team described the final moments at the tournament as surreal and bittersweet. “Having that last experience on the field with my friends and seeing the new leadership really come into their own was overwhelming. I was really happy that we won but also sad that that was going to be my last time playing rugby with this group of people,” said Krumm.

Mahoney has similar feelings and recalls the euphoria of that success. “To come back [to the first tournament she played at Saint Michael’s] and win it as a senior was satisfying. It felt like we were finally able to put something together, work as a team, and win something. I think knowing that that was my last game really fed into that feeling,” she said.

Men have some success too

Men’s rugby team forwards captain Jack Keddy ‘23, an economics major with an art and design minor from Atlanta, GA, said, “A lot of players from the opposing teams were football players who didn’t make their collegiate teams and turned to rugby instead. So, at this tournament we were going against rugby players who knew football, so it was a very different, more aggressive experience.”

After missing out on two years of competitive play due to COVID, Keddy said that he is proud of the younger players who met success at the championship despite their lack of experience in competitive environments. “I’m also proud of how far we’ve come because this is some of our players’ first time playing rugby, let alone a contact sport and they’ve done so well,” added backs captain, Patrick Hogan ‘24, a health science major with a chemistry minor from Chelmsworth, MA.

The team won a shield trophy at the conference representing the fifth place team in the tournament, which is the first piece of hardware won by the men’s team since 1991. “It’s a great feeling of pride that the group of people we have on the team now have elevated the program to the point where we’re able to accomplish something like [receiving the trophy] and getting acknowledgement,” said Keddy. “After the tournament, I had people coming up to me on campus congratulating me.”

The Saint Michael’s rugby men with their shield trophy in Springfield April 24.

Hogan added, “We played some powerhouse rugby teams so to have something to show for all the work we’ve put in is incredible.”

Men’s rugby president, Andy Dezjot ‘23, a political science, gender studies, and philosophy triple major with a public health minor from East Lyme, CT, said that some of the teams they competed against are top 10 in the country. He added that University of Massachusetts Lowell has competed and won against University of Vermont and Middlebury College, two schools that hold places as top 25 teams in the country. He said that when the team won against UMass Lowell, he remembered this and knew it was a big accomplishment.

The players appreciate their coaching roster as a huge element to the success they have achieved. Their head coach, Bhuttu Mathews, and their head assistant coach, Kevin O’Brien, are encouraging and helpful, said the players. “We have a total of five coaches, with two or three that attend each practice. It’s nice to have so many because each practice is really specialized as a result and that’s just not something you can get often with a club sport,” said Dezjot.

Hogan appreciates the coaches’ focus on the players’ success on and off the field. “They prioritize us and our academics first. Like if we need to take practice off to get our education back on track for any reason, they completely encourage that,” said Hogan.

Both the women’s and the men’s teams are looking to expand their club teams in the future. For the women’s team, Mahoney said “Our team atmosphere is the reason I joined the team, stayed on the team, and took a leadership position on the team. That was one of my best memories at St. Mike’s and I just want more people to experience that.” Tedesco is also looking to recruit for the team and said that she is hoping their recent success will gain them some exposure on campus and even throughout New England.

Keddy said that although the men’s team has nearly doubled in size since his first year, they are always looking for more members. Another goal the men’s team has is to win the conference championships in the fall, said Dezjot. This past fall, the team had lost, so they were able to figure out what they needed to work on and began that work. While the team is proud and reveling in their recent success, the players said there is always hope to do even better.

Hogan said, “We’re not stopping yet. The sky’s the limit.”

Alpine Racing Club lets avid, skilled skiers do what they love, outside varsity