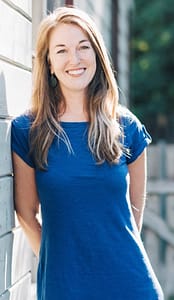 Amanda Rohdenburg, a 2011 Saint Michael’s gender studies and political science graduate, recently completed her certificate in the College’s health equity graduate program. Now she is using opportunities and tools from her education to make a positive impact on LGBTQ+ youth through her work at Outright Vermont – a Burlington-area non-profit since 1989 that works “to build a Vermont where all LGBTQ+ youth have hope, equity, and power.”

A New Hampshire native, Rohdenburg studied gender studies and political science as an undergraduate, completing her degree in 2011 before deciding in recent years to earn her Saint Michael’s health equity graduate certificate in 2022, once the College established that exciting new program.

“Before coming to Saint Michael’s, I graduated in a public high school class of 40 students,” Rohdenburg said, explaining why initially she found the College’s community and intimate environment so appealing — “so larger schools like the University of Vermont seemed overwhelming to me.”

In high school, she was active in the Harvard Model Congress and Mock Trial programs, spurring her early interest in political science. She said that she “once skipped school to testify at the New Hampshire legislature. I wanted more skills to advocate for big systems change!”

Her fascination with gender studies developed later during her first visit to the Saint Michael’s campus. At open houses, the College gives prospective students the opportunity to browse different majors as well as clubs, and that is where Rohdenburg heard about gender studies. “I was talking with Professor Trish Siplon about political science and my passion for feminism, and she mentioned the brand-new gender studies major. I instantly knew I wanted to be a part of helping that major take shape!” she said.

An influential mentor for Rohdenburg as a Saint Michael’s undergraduate was Carey Kaplan, now retired from the English faculty. She said Kaplan as much as anybody set her on a path toward becoming the associate director of Outright Vermont. “I remember having a conversation with her at the Center for Women and Gender that certainly set me on the path I’m on today,” said Rohdenburg, offering a “shout out to the Center for Women and Gender!”

She explained how she had formative relationships with two previous directors of the Center for Women and Gender from her time on campus — Kim Swartz and Julia Berberan ’09 — and those connections meant a great deal to her. Just as influential or possibly more so, she said, was Professor Siplon of the political science faculty, who played “a foundational part” of Rohdenburg’s journey from the start of college to this day.

Political science and gender studies classes at Saint Michael’s directly have guided Rohdenburg’s work at Outright Vermont, she said, shifting how she views political power structures, as well as gender and sexuality as tools of oppression to uphold those structures.

“At Outright, both lenses help our work become more impactful and effective,” Rohdenburg said, “especially because both practices challenge us to see the policy and systems-level change that needs to happen for individual community-level shifts to be sustainable.”

Rohdenburg joined the Outright Vermont team in 2014 as the director of advocacy, working with youth who experienced violence and with service providers so they could better meet the needs of those youth. After several years in that role she became the associate director. Her favorite part about working at Outright Vermont is working with the youth themselves. “LBGTQ+ youth and their allies transcend every social category—we are literally everywhere… It is such a gift to be a part of the relationships and connections that create this movement,” she said.

In order to “stretch her brain out a little bit,” Rohdenburg got on board with pursuing the Saint Michael’s health equity graduate certificate after hearing about it from Professor Siplon. “I saw the program as a way to get more grounded [amid] the flood of information and confusion that was circling at the start of the pandemic…” she said. “The second goal I had for the program was to support the work I was doing at Outright.”

She also enjoyed returning to Saint Michael’s and reconnecting with professors. The Saint Michael’s community “is still very near and dear” to her, Rohdenburg said, but she did note differences in the graduate certificate program from her undergraduate experience. “The online nature of the certificate work helped me fit the program around my other commitments,” Rohdenburg said. “The program was so supportive and flexible of my other work and life commitments.”

Her course work helped her build up resources that she uses in her work, as well as “increase [her] understanding of LGBTQ+ youth advocacy through a public health equity lens,” said Rohdenburg, who aims to pursue a master’s degree once her graduate certificate program is complete.

Asked if she would recommend the graduate certificate program to others, Rohdenburg replied, “Absolutely! The public health equity graduate certificate was an incredible opportunity to learn an entirely new lens to view my work through… The flexibility and creativity that the program offered was an enormous gift, allowing me to pursue the certificate without overextending myself.”