Professors of theater, philosophy, religion and biology get in on the act, with a different personality and voice featured each night of early November run 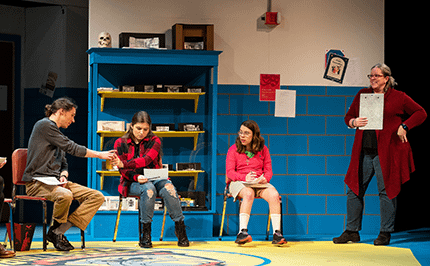 These top photos, behind the headline and above, show Katie Kirby of the philosophy faculty making her onstage cameo near the end of Thursday’s show of the fall play on November 3 when photographer Andy Duback came to capture the action.

Truth be told, Professors Katie Kirby from philosophy, Declan McCabe from biology, Peter Harrigan from fine arts/theater and Jeff Trumbower from religious studies (he’s also the vice president for academic affairs), were closer to stage veterans than neophytes given their fondly remembered earlier-life tastes of the theater spotlight.

Director John Devlin of the Fine Arts/Theatre Department came up with a novel approach to fill a relatively small, yet key, role in the play Nothing is the End of the World (except for the end of the world), a contemporary comedy/drama by Bekah Brunstetter  that ran November 2-5 in McCarthy Arts Center Theater.

The (in this case) shared cameo role as the mostly offstage director of a reality TV documentary at the center of the play’s plot primarily involved voice work from the sound booth in the back within sight of the stage and actors, but included a brief walk-on including a line or two onstage at the show’s end.

Set in the present or near future, this play features a charter high school in Manhattan that is welcoming two new students to the junior class. These are not ordinary students, and the whole experience is part of an experiment to research if and how human beings react to and relate to (or not) individuals imbued with artificial intelligence. The play’s themes touch on many coming-of-age issues faced by students today, and the playwright “tweaks our self-conscious awareness of our exposure on social media throughout the production,” Devlin said.

Devlin’s four faculty recruits were enthusiastic and grateful to the director for enabling and encouraging their participation – a different one for each for the four shows. He first heard of the play while at a recent Kennedy Center Theater Festival where he saw it on a database of plays. “I read it, loved it and thought it would be very appropriate for us since all our student actors playing high school students would be within four years of being in high school themselves,” he said.

In his reading, Devlin noticed the role as the reality show director was not gender specific. “They are a voice behind the camera so you don’t see them until the very last scene when they walk over, give one line and hand out release forms and pens for the students to sign in a pivotal moment” that advances the plot.

“I thought would be delightful to have this disembodied voice that folks might recognize but not place in a disassociated place like the theater,” the director. He mentioned it to colleague Harrigan, who not only liked the idea, but volunteered to be one of the voices. Next Devlin thought of VPAA Trumbower since the two had chatted about Trumbower’s theatrical background years ago. “He was very interested so he become the second of the voices,” said Devlin.

Third up came faculty philosopher Katie Kirby when she and Devlin struck up conversation on theater at the Academic Convocation in September and one thing led to another once he heard of her background.

Finally, two students in the cast who are science majors suggested Declan McCabe, a popular and good-humored biologist with a reputation for pitching in for any projects to help the College and students if asked. Devlin bumped into him at an Admission event and, predictably, found a ready recruit.

“This role actually has the first line of the show but then a moderate amount to say or do,” Devlin said. “Peter suggested they do the voice from my office at the back of the house which worked out well.” The faculty participants then headed down for the last-scene walk-on near the end.

Harrigan said that while his world has been theater since he majored in it as a 1993 Saint Michael’s graduate, he had not recently been on stage so he welcomed the chance. “Although I have lots of ways that I engage with students regularly, acting with them is not typically one of them,” said Harrigan, the costume designer for this and most shows. “I did act onstage with students in a Mainstage Theatre production in 1996, but the next time the opportunity rolled around was 25 years later in 2021. I was drafted into playing two roles in my students’ scene projects for a directing class. Well, as it turns out, memorizing lines is NOT like riding a bicycle. I think it is more of a ‘use it or lose it’ skill! I had to assure my students that their grades wouldn’t tank if their (shall we say mature) actor forgot his lines!”

But not to worry, since the recent role involved reading from a script, even in the cameo since the character brings a clipboard, which was “a comfort.” Harrigan said it also was a relief to mostly not be seen onstage and a fun challenge to only use his voice to convey all aspects of the character. “When I finally did appear onstage at the end of the play, it was terrifying and exhilarating to briefly enter that weird and magical space of a live performance,” he said.

The play’s story resonated with Harrigan for another reason. “In the mid-2010’s I was interviewed/ filmed for a full-length documentary on Marriage Equality in Vermont and naively expected that the director and crew would just follow us around capturing our lives,” he said. “Instead, the sessions were carefully constructed, and we were constantly interrupted and coached so the filmmaker could capture the story he was trying to tell. So it was fun and a little cathartic to become the driven but slightly oblivious documentarian in a play, particularly a comedy.”

Who was that voice?!

VPAA Trumbower said he was involved with theater all through junior high and high school, and one play in college, so diving back in was “great fun.” He heard later that campus music minister Jerome Monachino ’91 from the audience “spent the first 20 minutes of the play trying to figure out how they got someone to be the Voice who sounded so much like Jeff Trumbower!”

Two of his students who saw the show complimented the VPAA on his comic timing. “I was impressed by how much this show was being run by students: the stage manager, show runners, prop managers, light and sound crews, etc., all getting valuable experience in project management by being part of this production. It is something they can definitely highlight on their resumes as a job-readiness skill,” Trumbower said.

Kirby of the philosophy faculty said her dad’s love for movies and musicals and theater sparked her own love for it and she was “a theater kid” in middle school and high school, on stage, culminating with her biggest role – Miss Adelaide in Guys and Dolls.

“I mentioned my theater past to John in line at Fall Convocation when I asked him what plays would be happening this year, and that’s when he first raised the idea,” Kirby said. “I’m so grateful to John for the opportunity to dip my toes back in with the Saint Michael’s play. It was so much fun and I loved being part of it. It definitely inspired me to figure out how to do some theater in the future.”

Though science and nature are his first loves, McCabe, who grew up in Ireland, said he was in a few high school productions including a town wide competition, and for the Boy Scouts. “I was a Smurf one time,” he said.

Even since coming to St. Mike’s he sang Irish songs on stage with the late Tim Whiteford, a former faculty member who did an annual Irish music festival on campus for many years. One year he was invited to perform a comedic song from the FlynnSpace stage. “I learned it as a kid and can do it without an instrument,” he said. McCabe also has done frequent work with sets and props behind the scenes with his kids’ plays at Burlington’s Rice High School.

He said, however, that this was his first time seeing the intricate high-level behind-the scenes work at a Saint Michael’s play, and he was impressed.  He described the role he and the others played as a “clueless director who doesn’t’ understand teenage emotions.”   Devlin said each faculty actor brought something slightly different to the role, “so it made our actors pay more attention since the cadence of each one had subtle differences.”  To keep the voices a mystery to the audience, the faculty were not listed as performers, but only in the “special thanks” section of a program that was modeled to look like a high school yearbook, complete with high school photos of Devlin, Harrigan and others.

McCabe said he has great respect “for the number of lines students learn without any prompting. They put in the heavy lifting.” He said the experience was “really fantastic.”