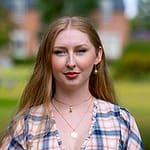 Students gathered in the Roy Room on the third floor of the Dion Student Center Tuesday afternoon, Nov. 8, to hear from Saint Michael’s College students and professors with various types of disabilities. The Student Disability Advocacy Alliance (SDAA), residence life, and the accessibility office sponsored the event.

Galgay began the discussion by asking panelists how they identify themselves.

Stein said that since he was born with his disability, he feels as though he has to think of it as a part of his identity. “But, I think of my identity as a student, as an athlete, as a musician,” said Stein.

Komabu-Pomeyie shared a similar way of thinking. “My disability is the first thing that’s noticed about me. Once someone gets to know me, they then see a doctor, a mother, a counselor, a teacher,” she said.

Standen said, “we exist and then we choose to define ourselves.” He included the concept that one identifies with what one wants to do. We are constantly choosing these pre-existing notions and then carving them into what best fits us, he said.

Galgay then moved the conversation by asking panelists if their disability has had a significantly positive or negative impact on their life. Greenleaf stated that it is far more nuanced than just something that has had a positive or negative impact. “My issues surrounding disability are not so much to do with the physical aspects of disability but instead the notion that people view you differently due to the disability,” he said. Instead of adapting society for the individual, we expect the individual to adapt to a society that does not accommodate them, he added.

Thompson stated that her disability has made her who she is in a way. “It’s given me skills to advocate for myself and it’s made me a generally stronger person,” she said. “It’s given me a sense of identity and more recently, it’s given me a community that I wouldn’t have otherwise.”

Schaefer stated that her disability on its own has not inherently degraded her quality of life, but the systemically ableist society that we live in has. The panelists then discussed some areas for accommodation improvement on campus.

“It’s all about the dialogue,” said Komabu-Pomeyie. “The discussion can not just include the disabled individuals, it has to involve able bodied individuals who are interested in advocating for the disabled communities.”

Greenleaf encourages able-bodied individuals to reach out. “Don’t be afraid to inquire and ask individual students what they specifically need around campus,” he said.