Formerly known as the Center for Multicultural Affairs and Services, Alliot space is now Center for Student Diversity, Empowerment, and Community (DEC) 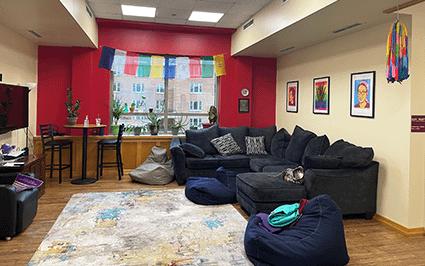 The center provides comfortable and safe space in Alliot Hall for students of many backgrounds to gather. (photo by Faith Morgan ’23)

This summer, the Saint Michael’s College center formerly known as the Center for Multicultural Affairs and Services (CMAS) changed its name to the Center for Student Diversity, Empowerment, and Community (DEC).

The mission of the center aims to support first generation college students, black, indigenous, and people of color (BIPOC) students, and international students, said Sarah Childs, director of the DEC and associate dean of students. “While the focus is on those aforementioned groups, there’s work in the center that welcomes people who wish to be aspiring allies. There’s room for everybody in the work and in the community,” she said.

Childs began working at Saint Michael’s in 2020. “Over the last two years, I’ve heard so much feedback from students about how old the name is,” said Childs. “To some, it felt vague. To others, it didn’t quite speak to the work of the center and how it has evolved over time.” Childs said that she did not have the time to make the changes during her first two years, so going into this summer she planned to focus on the name change and to get that process started.

In June, Choeden Lama, assistant director of the DEC and assistant dean of students, began working for the center and for the college. With the help of Lama, Childs developed a survey that asked questions about the center’s name to students who identified as BIPOC, international, or first generation, said Childs. The pair continued to send the survey out several more times, so that every student would have the opportunity to participate in the name-change process.

Lama and Childs went through the survey results and developed some questions that they used in two all-student focus groups hosted virtually. “I wanted the focus groups to be virtual so that all students were able to participate, no matter where they were,” said Childs.

“By the second focus group, we were really able to narrow the language,” she said. Three new names for the center came out of the focus groups. Childs and Lama took these names and made a secondary survey where students voted on their preferred name out of the three and explained why they chose one name over the others.

“The students really picked the name down to every word, every comma, the order of the words, everything, said Childs. “For example, they chose ‘center for student…’ instead of ‘student center for…’ because they wanted it to be clear that it’s not a student run center but instead it’s a recognized center that has full time professional staff dedicated to supporting these particular communities with a budget and other resources.”

From there, Childs gave the survey information and her final recommendation based on student feedback to her supervisor, Dawn Ellinwood, vice president for student affairs and dean of students. Ellinwood then brought the name change proposal to College cabinet decision-makers and President Sterritt to get final approval.

On the DEC website, Childs wrote, “The office enjoys a very vibrant environment. At any time, you will find a diverse group of students speaking various languages, working on projects, planning activities, discussing current socio-political issues, reading, or doing research.”

Childs encourages any students who are interested in the center to visit the DEC Website for information about how to get involved and about upcoming events held by the center.