A student of popular American culture, he lived life fully through teaching, travel, books, music, friendships and advocacy for the working man

Saint Michael’s College lost a respected and much-loved longtime faculty member of our community recently with the death of Bob Niemi on September 17. Here is Bob’s obituary, followed by a tribute from his longtime colleagues of the English faculty. 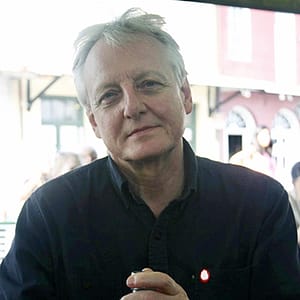 He was born April 17, 1955 in Fitchburg, Massachusetts to Alfred and Anita Niemi. A graduate of Fitchburg High School, Bob earned a B.A. in English from the University of Massachusetts, Amherst in 1977. He earned an M.S. Library Science degree from Columbia University in 1978 and earned a doctorate in English in 1990 from UMass Amherst. Bob was Director of Technical Services for the Leominster, MA, Public Library and the Western Massachusetts Regional Library System from 1979 to 1983.

Bob was a tenured, full professor at Saint Michael’s College, teaching American Literature, Film and American Studies since 1990. He served as the English Department chair for several years and earned the 2012 Scholarship and Artistic Achievement award. In 2022 at the recent fall Academic Convocation, Saint Michael’s honored Bob for his academic contribution to the College. A colleague’s tribute shared during that event cited Bob’s “high precision artistry on a daily basis” and observed that he was “never one to shy turn away from complex or difficult issues.” He taught more than 4,000 students in his 32 years at Saint Michael’s, and also enriched the lives of Vermont prison inmates by teaching film courses through the state Department of Corrections.

His experience with cancer showed Bob, with his Finnish heritage, fully to embody “Sisu” — a unique Finnish concept that can be roughly translated into English as strength of will, determination, perseverance, and acting rationally in the face of adversity. Sisu, cultural scholars explain, is not momentary courage, but the ability to sustain that courage.

Bob was an active member of the Center for Working Class Studies in Youngstown, Ohio. A student of American popular culture, Bob presented numerous papers at the Northeast Popular Culture Association (NEPCA) conferences, hosting two at Saint Michael’s and serving twice as NEPCA’s president. He presented at more than 60 literature and film conferences throughout the  world.  He was a prolific writer, publishing seven acclaimed non-fiction books on film and popular culture topics and dozens of critical-biographical essays. An avid book collector, reader and talented artist, Bob enjoyed hiking, photography, oil painting, and linocut artwork.

Bob was predeceased by his parents, and sister Karen. He regretfully leaves behind Connie, his son, Alex and his partner Cora, two brothers, Tom (Anne) and Al (Jane) Niemi, nieces, relatives in Finland and many friends.  A celebration of Bob’s life is planned for a future date.

Tribute to Robert Niemi – Professor of English 32 years – by his English Department colleagues and delivered by Maura D’Amore upon Bob’s retirement earlier in the year, and read again at the 2022 Academic Convocation on September 16 — the day before Bob’s death. The first paragraphs are from Maura and then subsequent paragraphs came from other English colleagues:

As my long-time colleague and friend across the hallway, Bob Niemi has always been kind, thoughtful, and considerate, never once failing to ask me how my classes went or what my students were reading when we exchanged greetings mid-day.

I always looked forward to these encounters, and I never passed up an opportunity to ask Bob what he was working on–as he was always deeply engaged with plans for a project or an article or a book draft that drove him intellectually and ignited his passions.  I found these conversations to be completely inspiring–even in the briefest of exchanges–as Bob’s work ethic and unwavering focus on the task at hand were both catalysts like no other for my own work.

It is hard to procrastinate around a man who always seemed to dive headfirst into research and writing, and who relished the pressure of an upcoming deadline or difficult writing stretch. In each instance, Bob could always stare down the stress of an academic challenge, meet and master it, and then calmly move on to the next task. It was high-precision artistry on a daily basis, and I marveled at Bob’s consistency.

To me he seemed like a Viking scholar-explorer slicing through deep and turbulent seas, beating back impediments — Bob is a proud Fin of course–and in his world there is no room for lamenting or excuse-making.  Even in this most recent battle with cancer Bob remains steadfast at the helm, strong, stoic, and uncomplaining. “Keep on living as fully as you can,” he told me recently, “it’s the best revenge.”

I can’t thank Bob enough for the role model he has been to me as a teacher, writer, colleague, and friend, and I will never forget his disciplined and success-filled approach to living fully and living well.  I have no doubt that Bob Niemi’s remarkable legacy will be a part of this college for many years to come, and we are all the better for it.

One recent memory we all have of Bob is of his giving each of us a painting he’d done of a writer he knew we loved. The gifts were generous in spirit and gorgeous in their execution. He surprised us all in the best possible ways. The writers he chose were also among his favorites, attesting to a shared connection forged with each of us through art. It was very moving! Another important recent moment was Russell Banks’ speaking to Bob’s class. He and Banks became good friends after Bob wrote a book on his work. Bob always kept his door open and was ready to drop what he was doing to chat about students or about what we were each teaching that day. Extraordinarily well read and interested in everything, he often shared useful insights into someone I was teaching as I walked down the hall to class, providing me with welcome new angles on the material not a moment too soon.

Bob has always brought a sense of integrity and purpose to his teaching. He holds students, his colleagues, and most notably himself to the highest standards. His formidable intelligence and no-nonsense professionalism is balanced by a heartfelt kindness. He is known for being especially supportive of students who feel marginalized, displaced, or simply insecure in the classroom.

Professor Robert Niemi, Bob Niemi, was a credit to Saint Michael’s College in both his teaching and writing. He has written numerous books, all important, whether they are on Russell Banks, film or the Beats. I myself read and enjoyed: The Ultimate, Illustrated Chronology of the Beats. He added so much, not just to the collage, but to the literary world.

I think we all are very aware of Bob’s immense dedication to his scholarship. He really does have an encyclopedic knowledge of particularly American film. He has been the centerpiece of the film program (as such) at Saint Mike’s for many years. Also we have always been a department of differences, in the sense that we all bring different critical approaches to our teaching and work.  Bob’s Marxist bent and his acute awareness to class consciousness will leave a lacuna (actually everything is a lacuna now). And I think it has been very inspiring to see how hard he has tried over the last 3 years to make it back to teaching and resist retiring.

I’m always struck by how many friends Bob Niemi has across the college – it’s a sign, I think, of his collegiality, his goodwill, his intellectual generosity, and his deep interest in and engagement with American culture and politics. He has a capacious mind and a quick wit, and it’s been wonderful to share hallway conversations with him about teaching and art over the years. His students glow when they talk about him, and they often mention the texts and discussions they had in his courses in other classes and in casual chats. Never one to turn away from complexity or shy away from difficult issues, Bob has done so with fortitude and deliberation. It’s clear to me that his students see that and that they admire him for it. I do too. We won’t be the same without him in our English Department and we all send him much love.

Please join me in wishing Bob Niemi all the best and celebrating his many achievements and contributions to Saint Michael’s College.