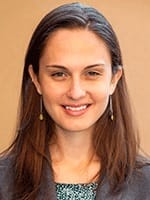 Jane Pucher, senior staff attorney with the Innocence Project, spoke Monday night to a group of Saint Michael’s College students about “The Role of Innocence in Criminal Legal Reform.” She spoke to an attentive and engaged audience about the work that the Innocence Project does, the cases that have been successful in freeing wrongfully convicted people, and the continued work that she does with the nonprofit.

Before becoming involved with the Innocence Project, Pucher was a public defender and supervising attorney at Bronx Defenders, earning her bachelor’s degree from Columbia University and law degree from Georgetown University. Her PowerPoint presentation titled “The Innocence Movement: Exoneration to Reform” guided the lecture and tracked the process of exoneration as well as data. A Q & A session followed the presentation. The speaker appeared on campus at the initiative of Professor Krista Billingsley, director of criminology and assistant professor of anthropology and criminology.

The founding “twin missions” of The Innocence Project are using DNA evidence to exonerate as well as address the cause of wrongful convictions. Pucher expressed that some of the more “heartbreaking” aspects of the work include being unable to help people based on absence of evidence or lost evidence. Because many crimes do not involve DNA or biological evidence, there is only a “small percentage of people we can actually help,” she said.

Pucher also emphasized the emotionally heavy material with which she deals on a daily basis. Regarding the crimes that the Innocence Project takes on, she and colleagues encounter “a lot of pain and serious feelings to wade through.” Statutes on DNA testing are “not all created equal” depending on the state, so access to DNA evidence varies across them, she said.

Litigation to gain access and retest DNA evidence can be a very agreeable process with the prosecutor’s office, or it can take years and be a battle for the Innocence Project, said Pucher.

Pucher’s PowerPoint presentation provided the group with some data about the successes of the Innocence Project and demographics involved. She said 375 people in the U.S. have been exonerated (21 of whom were on death row) and most of whom were in Texas, Illinois, and New York. Of the exonerated people, 62 percent were Black, 30 percent were white, 7 percent were Latino, 1 percent were Asian, and 11 percent were juveniles when convicted.

Pucher also dispelled the idea that our system works through a trial basis. “Ninety-five percent of our cases in our country are closed by a guilty plea,” she said, adding, “There is enough incentive in the system” to generate guilty pleas such as mandatory minimums if the person is found guilty.”

Here are some answers from an audience Q & A that followed Pucher’s talk:

Most interesting case you have had at the Innocence Project?

The Rodney Reed case in Texas is “interesting for a number of reasons,” according to Pucher. The case went to the Supreme Court this week over whether or not Reed should legally be able to use the DNA evidence in his case. It is also a “very racially charged case” because Reed was arrested because he was a Black man who was having an affair with a white women who was engaged to a white police officer, and she was found murdered. Reed is on death row now, but the Innocence Project is fighting his case.

How do you know the cases you take on are innocent?

The Innocence Project combs through the cases as well as the DNA testing. “People want to get out of jail because it is a horrific place to be,” Pucher said about cases in which the subjects might be actually guilty. “I don’t fault anyone for trying to get out.”

Which institutions pose the largest barriers to the work that the Innocence Project does?

Prosecutors’ offices can pose the greatest barriers, or they can be really helpful allies depending on the office and its personnel, she said.

When the wrongfully convicted person is found to be innocent, is there effort to prosecute the real offender?

It is up to the prosecutor’s office to follow up on the real offender, Pucher said.

Do you think cheap prison labor and the Prison Industrial Complex contributes to mandatory minimums?

“Yes, I do. There’s a huge financial incentive,” said Pucher. Vermont in this upcoming election has ending slave labor in prisons on the ballot.

How often are people compensated for time lost, damages, or wrongful action by the state?

“It happens sometimes,” said Pucher, but they can easily write it off as a mistake. Some states have petitions for compensation.

What inspired you to join the Innocence Project?

“I was a defense attorney before… and I loved that work,” said Pucher. It’s important, innocent or guilty, for people to have someone standing by them, seeing them as a whole person. Innocent versus wrongful conviction deals with the difference between factually not doing the crime and not getting your due process rights, and Pucher is “committed” to ensure that people on trial get their due process rights regardless of innocence or guilt.