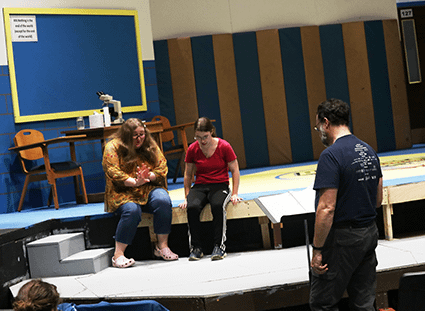 The Saint Michael’s College Department of Fine Arts-Theatre is presenting Nothing is the End of the World (except for the end of the world), a contemporary comedy/drama by Bekah Brunstetter on November 2, 3, 4, and 5 at 7 p.m. in the McCarthy Arts Center Theatre. Directing the production is Professor John Paul Devlin of the Fine Arts faculty.

Set in the present or near future, this play features a charter high school in Manhattan that is welcoming two new students to the junior class. These are not ordinary students, and the whole experience is part of an experiment to research if and how human beings react to and relate to (or not) individuals imbued with artificial intelligence. To ensure a little more publicity for the experiment, a film crew is brought in to record a pilot reality TV show about the experiences of the two AI students as they discover life as average 16-17-year old teenagers live it.

Devlin notes that “in the 10 years since the play was written, society has continued to see the impact of artificial intelligence and algorithmic analysis of data swept up by social media leading to targeted marketing. We have also (mostly) got through a pandemic which amplified our reliance on technologies.” The cast and crew are drawn from across the College and have been engaged in building and rehearsing the production since the beginning of September. The play’s themes touch on many coming-of-age issues faced by students today, and the playwright tweaks our self-conscious awareness of our exposure on social media throughout the production.

Another scene from a recent rehearsal.

These shows are free and open to the public.

From the back of the house at the recent rehearsal.