Media Creation Studio up and running with photo sessions, podcast 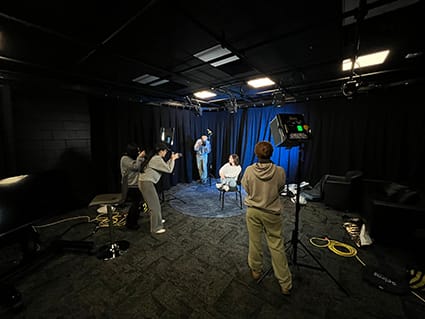 Student editors from The Defender class with Professor Jerry Swope use the new Media Creation Studio in St. Ed’s to practice photography with studio lighting. (Photo by Patrick Bohan)

Saint Michael’s professors and students are wasting no time putting the College’s new Media Creation Studio to good productive use.

Student editors from Professor Jerry Swope’s publication class for The Defender — the College’s student newspaper — had great experiences last week on Wednesday and Friday in the impressive new facility located on the second floor of St. Edmund’s Hall, the professor said.

“We were just doing a demonstration of studio lighting techniques for a particular story that is going to run in Issue 2 of the Defender that is coming out October 20 about the Student Government Association Executive Board,” said Swope, who added it was his first class session in the new studio, though it surely will not be his last.

Swope collaborated with Pat Bohan, director of the Media Creation Studio, who provided the lighting demonstration for students since it is more his specialty. “I think it went really well and the students had a lot of fun working on a hands-on project and developed skills that they can apply to their photo-shoot for the newspaper,” Swope said. The students used Canon Digital SLR cameras provided by the College during the class, which lasted about an hour.

Swope said he has seen some results from the studio shoot and they look good. “It was really helpful to go back in on two occasions to learn techniques and experiment with them and learn from successes and mistakes,” he said. “Eventually I would like to have the Defender editors record videos promoting the upcoming issues for social media once the lights for video are all installed and ready to use.”

Possibly the first faculty client for the new studio the day before Swope’s students first came in was Biology Professor Declan McCabe, who has recorded a regular podcast for about the past year from a shed behind his house, but now he is thrilled to have a professional grade studio for his podcast recordings.

“My office is too noisy for recording so I’d been using the backyard shed, and when I heard they had a studio, I said, ‘I have to try that,’” McCabe said. He arranged to come in and work with Bohan, who set up and operated the necessary gear for the recording sessions.

“I just sat on the comfy studio couch and spoke into a microphone and recorded three episodes back-to-back,” said McCabe of the podcast called “Nature Snippets” that he posts online every two weeks. “They vary in length but typically are about 10 minutes,” he said. Many are based on his regular nature column “The Outside Story” that he writes for Northern Woodlands magazine, though others just are on topics that interest him but are not right for the magazine, such as a recent episode on storm drain sizes.

Now that he has the coming podcast recorded, McCabe said, he will edit them with free software called Audacity that he already was using, but it will be easier than before. “I listen and edit out extraneous noise, and now with the studio there is much less,” he said. McCabe will likely be back soon with students since he is the faculty mentor for the student-produced “STEM at SMC” podcast.