New mural celebrates ‘Power and Joy in Access to All Stories’ 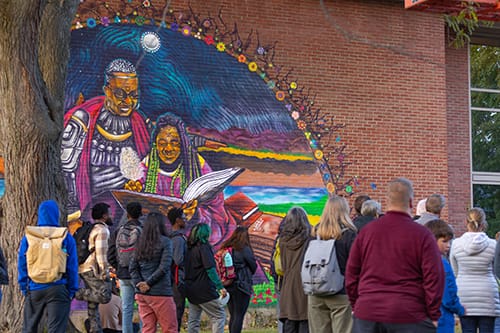 Community members gather to appreciate the mural on the side of Alliot Hall during Monday’s ceremony. (photos by Patrick Bohan)

An unveiling ceremony Monday for the College’s first community mural, titled “Power and Joy in Access to All Stories,” drew a spirited crowd of close to 100 people who admired the beautiful new image now prominent on the front wall of Alliot Hall. They took inspiration to celebrate and commit to justice for traditionally underrepresented identities and experiences on the Saint Michael’s campus.

The College’s Education Department collaborated with the Vermont-based family art collective Juniper Creative Arts to conceive of and paint the bright colored mural, which was drenched in sunlight on a crisp fall afternoon when the ceremony began at 5 p.m. as guests sipped cider and munched doughnuts while mingling.

The mural, still receiving final additions, celebrates Black, Indigenous, and other People of Color (BIPOC), people with disabilities, and people of all genders, speakers at the unveiling said. They recounted how members of the Saint Michael’s College community participated in visualizing and creating the mural with Juniper Creative Arts in September.

This well-established and respected family collective includes Will Kasso Condry, who did most of the actual painting, Jennifer Herrera Condry, supervising creative director for the group, and daughter Alexa Herrera Condry, a recent UVM art and computer science graduate. All three attended the unveiling, sharing warm words about their experience at Saint Michael’s and answering questions about their creative processes.

Reference models for the mural’s central figures – an elder mentoring a younger woman as she reads and sets down stories– were Billie Miles ’76, long-valued leader in the College’s Information Technology Office, and a current student, Kaltumo Ibrahim ’25, president of the campus MLK Jr. Society.

Saint Michael’s President Lorraine Sterritt emphasized the significance of this “large-scale art-making project,” noting that Juniper Creative Arts “has led nearly 200 students, faculty, and staff in a collaborative process to create a truly remarkable piece of art.” Sterritt said the mural on the south wall of Alliot “reflects the diversity we wish to realize here at Saint Michael’s and signals that ALL are welcome, represented, and embraced on our campus.”

Valerie Bang-Jensen of the Education Department opens the ceremony.

The Marc and Dana vanderHeyden Endowment in the Fine Arts supported the full cost of the mural, and installation of lighting will draw attention to this beautiful campus addition even at night.

Valerie Bang-Jensen of the education faculty offered the opening welcome, thanking the many campus office leaders who made the project possible. She introduced her education faculty colleague Rebecca Haslam, who started her opening statement with words from the author bell hooks’ Outlaw Culture: Resisting Representations (2012): “ The function of art is to do more than tell it like it is – it’s to imagine what is possible.”

“We had a goodbye party a few weeks ago for Billie, and she was telling some of her stories of her time here at Saint Michael’s,” Haslam recalled. “When she first heard about the artists’ intention to ask her to be the reference model, she gave a hard ‘no.’ I had asked her at the party what changed her mind, and that’s when she said, ‘if nothing changes, nothing changes.’”

The next speakers were current Saint Michael’s students Asher Rich ’24 and Amy Hylen ‘25. Each eloquently captured the importance of the mural to the community. Rich began by speaking a “Land acknowledgement” and went on to describe in more detail the elements of the mural and what they represent. “It is now our duty to uphold the message and purpose of this mural as a community,” Rich said.

Hylen spoke on a theme of mirrors and windows that arose in the mural visioning process. “The intangible mirrors … represented here allow members of our community to see themselves in this art and to affirm that they are not alone, they are loved, they matter, they belong,”

Will Kasso Condry said the three family artists are deeply pleased with the result. “We never have an idea what the end product will be with these projects and no preconceived notions,” he said, though adding, “One thing we don’t move on is sharing black and brown stories. Those are paramount and upfront.” Jennifer Herrera Condry said, “The hospitality we experienced at St. Mike’s has been greater than five-star,” as they lived among students in the Townhouses. She added, “That’s the point of all this, being able to step outside our own comfort zone and step into understanding the lives of other folks…”

Chicha Romain ’24 reads a quote about books and reading.

Jennifer then introduced Billie Miles, noting her important history for the College as part of one of the earlier Saint Michel’s classes with women. “We thought it important to highlight an elder with a lot of memory and knowledge telling the story to a younger person who is a current student, and that’s what you’re seeing, literally.”

Billie Miles said she feels honored to be part of the project and sees the mural as “an expression of where St. Mike’s wants to be — diverse, inclusive.” She said she was “Proud of the College for doing this visible statement of our aspirations.”

The ceremony closed with students reading quotations they had selected as relevant to the mural project and its theme of reading and telling stories while resisting the banning of books.
(Elizabeth Murray ’13 and Alex Bertoni contributed to this report)