Students packed the stands to cheer on the Purple Knights for a historic moment at Duffy Field on Friday night as Saint Michael’s College field hockey took on the Southern New Hampshire (SNHU) Penmen in the College’s first-ever under-the-lights contest. 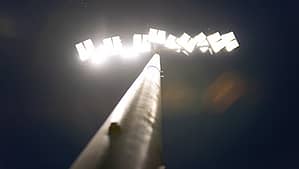 The unusually large crowd soon playfully rose to clamor over contested calls despite not understanding the technicalities of the sport entirely.

With the score still tied 0-0 at the end of the first half, women’s basketball coach Shannon Bollhardt rallied the crowd with a fun obstacle course as entertainment. Four students participated in a competition where they had to maneuver a field hockey ball through cones using a stick and mostly-proper technique. The competitors also had to stop to put on a jersey and shorts at two different points during the course, before rushing to take a shot on goal to determine the winner.

Coming out of the half, the teams returned to action in the third quarter where each team scored a goal. The game appeared to be nearing overtime as it entered the final 50 seconds of the fourth quarter, before the Penmen ultimately scored a last-minute goal, winning the game.

With the debut of Saint Michael’s College’s state-of-the-art field lights, students and community members can look forward to many action-packed nights both this fall and coming spring. In addition to field hockey, spectators will be able to take in men’s and women’s soccer matches this fall, and men’s and women’s lacrosse this spring.

Upcoming under the lights games:

Learn more about athletics at Saint Michael’s College by visiting our Athletics page.

The first St. MIke's team to play under lights lines up before Friday's game.