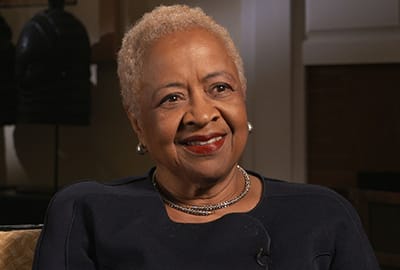 Saint Michael’s College will host renowned legal scholar, civil rights advocate and former judge Margaret A. Burnham to speak about her work investigating racial violence and murders in the Jim Crow era – cases and stories that, until now, have been erased or ignored through history.

Burnham’s talk on January 31 at 4:30 p.m. in the McCarthy Recital Hall is free and open to the public — part of the College’s Sutherland Lecture Series  — and will serve as the keynote address in honor of Dr. Martin Luther King, Jr. Day this month. The College’s annual Donald J. Sutherland Lecture series, which was started in 1998, has brought leading thinkers and scholars to campus to speak on issues in the liberal arts and sciences.

The speaker has spent her life focused on civil rights law, culminating in her 2022 book By Hands Now Known: Jim Crow’s Legal Executioners. Burnham’s book explores cases of racial violence between 1920 and 1960, the legal apparatus that allowed it to continue, and the legacies of those cases. By Hands Now Known was named one of the Best Books of 2022 by several publications, including The New Yorker, and it was a finalist for the Kirkus Prize.

Burnham began her career at the NAACP Legal Defense and Education Fund and, in 1977, she became the first African American woman to serve as a judge in Massachusetts. She is currently a University Distinguished Professor of Law at Northeastern University, and she founded the university’s Civil Rights and Restorative Justice Project (CRRJ) within its School of Law.

Through CRRJ, Burnham has led teams of law students in investigating acts of racial violence in the Jim Crow era. The project serves as a resource for scholars, policymakers and organizers involved in initiatives seeking justice for these crimes. She is also a Carnegie Fellow and is among four scholars appointed by President Joe Biden to serve on the Civil Rights Cold Case Records Review Board, which reviews records of murders and racially motivated violence that occurred between 1940 and 1979.