The Student Affiliate’s chapter of the American Chemical Society hosted its sixth annual Chemistry Magic Show on Wednesday, November 20 at 7 p.m. in the McCarthy Arts Center at Saint Michael’s College.

“Part of what the group tries to do is really bring science to the public in an understanding way and get the public engaged,” said Professor David Heroux, the Chemistry Department chair at St. Mike’s who restarted the Student Affiliate’s Chapter and began the annual tradition of doing the show when he began teaching at St. Mike’s six years ago.
“Part of doing the show comes from that goal and part of it is just that it’s a lot of fun.”

The Student Affiliate’s Chapter of the American Chemical Society is more commonly referred to at St. Mike’s as the Chemistry Club.

Rather than run the show by himself, Professor Heroux prefers to get students involved in doing the show and let them take over the demonstrations. He said that to do a demonstration, all students are required to understand not only the science behind it, but how to explain it to someone else. Participating in the show presents a unique way for students to learn chemistry and gain public speaking and communication skills at the same time,” he said.

“It’s very important for scientists to be able to communicate what they do,” Heroux said. “It’s not something scientists are overall very good at, but it’s a skill to have. Everyone at one point in their career is going to be talking in front of an audience, so the show helps them get used to that – we get a couple hundred people attending these shows sometimes, so for a student to go from not being able to speak up in front of a classroom of 12 or 15 to being able to talk in front of a crowd of a couple hundred, that’s a valuable skill.” 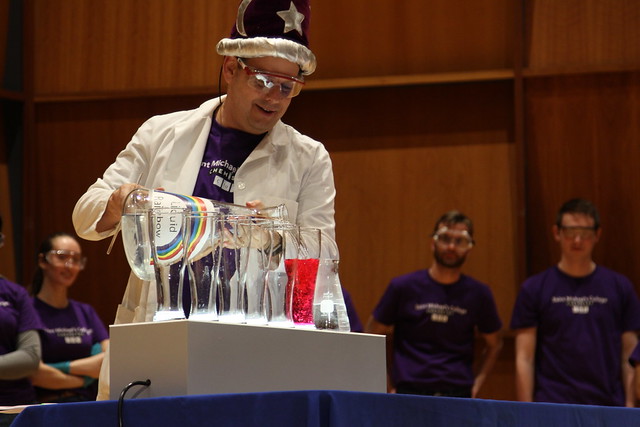 Heroux said witnessing students’ progression is his favorite part of the shows. “When I see a student do a demonstration, and just do a great job presenting it, then I know they learned how to do it and they’ve taken it upon themselves. I teach the way that I do and say the stupid jokes I want to say, but what happens with the students is after some practice they have their own stupid jokes and their own way of presenting, and it becomes their demonstration. Once you see that progression, you know they’ll be able to pick it up with something else.”

Heroux said part of the importance of the show lies in outreach and engaging children in their interest and love of science. “All kids love science. Kids are naturally curious, and scientists are naturally curious, and somewhere along the line a lot of people lose that somehow,” he said. “You don’t have to get kids interested in science because kids are already interested in science. It’s really about maintaining that interest in science, or even for some of our students here, it’s about reengaging that interest.”

Even for someone who isn’t a science major, Heroux said, science and having a basic appreciation for it is important, and part of the goal of the show is to reignite that interest and appreciation.

Lauren Walsh ‘20, a student participant in the show, said she participates in the performance because “it’s a ton of fun and I love teaching others about the science of how stuff works. Each of the tricks we do are really exciting to watch — the first time I watched them, my jaw dropped, and they usually have the same effect on others. The best part about it is that most of the tricks are based in science that you can see in your everyday life.”

Walsh described one of her own demonstrations or tricks, called the flame test, which she performs by pouring various salts into dishes and then setting them on fire. “Each produces a different color flame, like bright green or red,” Walsh said. “The fire that I pour on the salt causes the electrons in the salts to enter an excited energy state and when they drop back down to a stable energy state they emit color. The reason they all emit different colors is because each different salt’s electrons will jump to different levels, like going up 10 stairs vs. going up 2 stairs. This trick is cool because it’s exactly how fireworks work!”

The show was well a well-attended, successful depiction of the wonder of chemistry, and St. Mike’s Chemistry Club students’ and faculty members’ dedication to it.

"The best part about it is that most of the tricks are based in science that you can see in your everyday life.”