Coed a cappella group excited to be performing again on campus

Winter concert for Sleepless Knights comes after a year off during the pandemic, delighting good-sized and enthusiastic Recital Hall audience 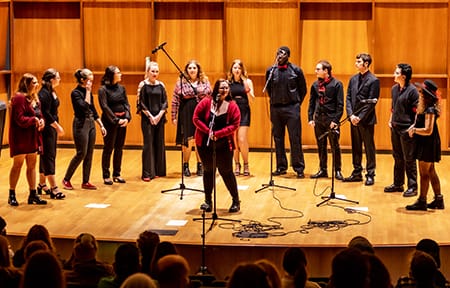 Sleepless Knights perform in the Recital Hall before an appreciative audience on December 10. (photos by Patrick Bohan)

Sleepless Knights, the Saint Michael’s College co-ed a cappella singing group, had an enthusiastic and good-sized audience turn out in the McCarthy Arts Center Recital Hall the evening of Friday, December 10 for the ensemble’s annual winter concert.

“We always get a pretty good turnout for our concerts and the audience is filled with a combination of students, friends of members, family members, and occasionally a faculty/staff member or two,” said the group’s co-president Abby Bozzuti ‘22, a biology major with minors in chemistry and Latin who sings alto in the group. The other co-president is Emma LaRose ’22, an elementary education/psychology major and tenor from Bristol, VT. “We love coming out on stage and seeing all of the people who support us cheering us on.”

The group typically does two formal concerts each academic year – one in each semester, “but we also have other small performances throughout the year such as Friday Knight Dry,” Bozzuti said. “Pre-COVID, we have been involved in more performances off campus as well, like being part of a living art exhibit in Burlington, singing at a mentor dinner at Burlington High School, and we even led an educational session on a cappella and performed at Bernie Sanders’ annual Student Choral Concert in 2018. We are working on getting back to performing more frequently off-campus now that things are a bit more open.”

That pandemic challenged the group last year, and while they tried their best to stay active, too many obstacles led to a year off for the singers. “We started out the pandemic year by meeting outdoors, masked, and socially distanced on the 300s field to rehearse twice a week. We knew that we would likely not be able to have a concert, so we had the goal of recording some of our songs individually and having one of our members edit the pieces together,” Bozzuti said. “We rehearsed these songs together and then went home to record them. Unfortunately, we were only able to get one song recorded before cases spiked and clubs no longer were allowed to meet. We thought about rehearsing online, but the reality is that with different internet speeds, camera/mic quality, etc. this would have been too difficult and not very productive. In the end, we took a break from about October of 2020 through the spring semester of 2021.”

Women from the ensemble feeling the music.

The recent concert marked a return to the old tradition of having an end-of fall-semester performance that they call a winter concert. “We usually work one or two Christmas songs into our se tlist for this concert, but it is not strictly a Christmas Concert,” she said.

This year the Sleepless Knights performed eight numbers for their appreciative audience: “White Winter Hymnal,””Kaleidoscope Heart,” “Crazy in Love/Take Me to Church.” “Put Your Records On,” “Want You Back,” “Carol of the Bells,” “California Dreaming” and “Hallelujah.”

“It is fun to spend time with people who share our joy for music and performing,” the co-president said. “Outside of classes, it is a great space to meet friends and different people who you might not run into around campus. We really do get along and have a lot of fun together.”

The group rehearses a week – Sundays and Tuesdays from 8 p.m. to 9:30 p.m. “We also always have a longer “Boot Camp” rehearsal about a week before our concerts to make sure we are fully prepared,” she said.

For the spring semester, the ensemble plans to work on some new songs, “now that we have a bit more of a solid foundation coming back from COVID,” she said. “We’ll be including these new works in our concert at the end of the semester. We will also likely be performing at a few events on campus and maybe even some off-campus!”

Some of the singers took solos during the concert.

Saint Michael’s also has an all-female a cappella group called the Acabellas and an all-male group called Mike Check. “We love to support the other a cappella groups on campus by attending their performances or giving each other feedback on our songs,” she said. “We have had members be in both the Sleepless Knights and Mike Check in the past, though not this year. We’ve also been working with the other groups towards putting on a group performance at some point in the near future.”

“We host auditions twice a year – once in the fall semester and once in the spring semester and we are always looking for new members!” Bozzuti said. “If anyone is interested in auditioning, keep an eye out for posters and announcements about auditions and feel free to reach out to any current members with questions!”

Other group members besides Bozzuti and LaRose are:

Men’s and women’s voices blend for a big sound in the coed Sleepless Knights group.