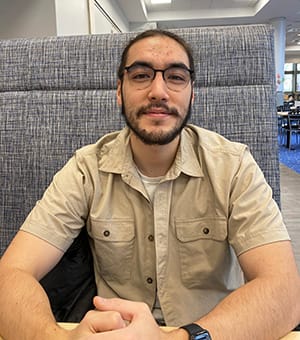 When Connor Vezina ‘22 got word of his acceptance into the National Association of Student Personnel Administrators (NASPA) Undergraduate Fellowship Program (NUFP), he felt as if his hard work was finally paying off. “This was a way to show that the work I’ve done is meaningful and impactful,” said Vezina, a psychology and philosophy double major from Irasburg, VT.

NASPA offers the fellowship program for students in historically disenfranchised populations to have access to opportunities that will shape them a promising future in the field of higher education and student affairs administration. Sarah Childs, director of Saint Michael’s College’s Center for Multicultural Affairs and Services and associate dean of students, also was a NASPA fellow during her undergraduate education at Northern Arizona University.

As a member of the organization and a former fellow herself, Childs took on the role of being Vezina’s mentor. The program requires fellows to assign a NASPA member as their mentor throughout the fellowship experience. Vezina said that asking Childs to be his mentor felt natural given their close relationship before his induction into the fellowship. “Sarah was kind of my mentor even before NASPA — she helps me personally and professionally,” said Vezina.

Childs said the fellowship program is extremely dependent on the motivation and effort of the participant. “I often tell [Vezina] that he’s going to get out of it however much he puts into it,” the mentor said. For that reason, she said, NASPA does not give the fellows a prescribed curriculum. “I’ve presented him with a platter of opportunities that he might be interested in and he takes initiative from there,” said Childs.

Childs suggested that Vezina take part in informational interviewing with various colleagues at college campuses near and far. Her advice is rooted in her strong belief that perspective is extremely helpful in advancing in a career and life, so she wants Vezina to understand the nuances in schools at the higher education level. Through understanding this, Vezina will learn about how all schools function in different ways. Childs said that it is crucial for Vezina to speak with higher education officials from schools in different areas, to get the big picture of higher education and student affairs.

Childs also takes Vezina along at Saint Michael’s faculty meetings. “Dawn Ellinwood is my supervisor and I’ve asked her for permission for him to attend various meetings with me so he can learn about some of the conversations we have in student services on this campus,” said Childs. This helps Vezina better understand the broad range of considerations that higher education colleagues must take into account, said Childs.

NASPA also presents Vezina with many opportunities. For instance, Childs encourages him to attend conferences of the organization. “I want him to have the opportunity to attend the NASPA national conference in Baltimore. I’ve gone many times and they have like 5,000 attendees from around the world and certainly around the U.S.,” said Childs.

The national conference is NASPA’s biggest event, consisting of half and full day workshops, student affairs inspirational talks, scholarly paper sessions, general interest sessions, affiliated conferences, and more. The conference is a great way for NUFP fellows to learn more about higher education and student affairs from professionals. Additionally, NUFP fellows make great connections through the conference, with more than 5,000 attendees working in or interested in student affairs. Vezina believes that networking is one of the most crucial tools to advance in the field.

Vezina already has begun networking by being a NUFP fellow, including through pre-conference opportunities, said Childs. “They have some really awesome chances to meet other fellows in person, to connect with other higher education and student affairs administrators who oversee the undergraduate program,” said Childs. Vezina’s connections through NASPA and the fellowship will stick with him, offering great support and assistance as he prepares for graduate school. “In the world of higher education, if you have connections, you progress,” said Vezina. These connections have not only helped Vezina understand the field of higher education, but prepared him for his eventual transition to graduate school.

Halfway through his senior year at Saint Michael’s, Vezina plans to attend graduate school to learn more about higher education and student affairs after graduation. Vezina feels more prepared to delve into graduate school as a NUF fellow. “The NASPA fellowship has already set me apart with understanding the process because there are current graduate students in NASPA that help me out… I can ask them questions about interviews or assistantships,” said Vezina. The NASPA national conference also hosts a graduate student fair, giving fellows the opportunity to ask graduate students for advice, guidance, or stories about their experience.

Not only does the NASPA fellowship provide students like Vezina with great resources to get a head start in the field of higher education — it also provides a multitude of opportunities to students who come from marginalized backgrounds. The NASPA fellowship accepts students who identify as part of a minority population, aiming to educate communities such as LGBTQ+, BIPOC, disabled, and more. Vezina appreciates NASPA’s focus on identity in minority populations, which is something Childs values about the program as well. The NUF program is predominantly students of color, said Childs. “It was rewarding to see other people who shared some identities and to hear about the different experiences on different college campuses,” added Childs.

Saint Michael’s College aims to educate students who are passionate about their interests. Vezina has displayed his passion for student affairs through his hard work to become a NUFP fellow and the work he has begun as a NUFP fellow. He is expanding his education by taking advantage of the resources around him and making connections in his field of interest. While Vezina is the only NASPA fellow on Saint Michael’s campus that Childs knows of at the moment, any minority population students interested in higher education or student affairs are encouraged to apply. To find out more about the NASPA fellowship, visit https://www.naspa.org/division/naspa-undergraduate-fellows-program-nufp.