Studying abroad in the midst of a pandemic: Iceland

Olivia Hansen '22 spent semester in beautiful and dramatic setting despite challenging times, forging close friendships, learning on the move to see volcanoes and glaciers, and doing independent study on a small sheep farm

The last academic year was full of uncertainty for the Saint Michael’s College community. However, a few of the members in our community decided to amplify the unpredictability by studying abroad in midst of the pandemic. Olivia Hansen, class of 2022, was among the few who were able to study abroad their junior year in the spring of 2021. 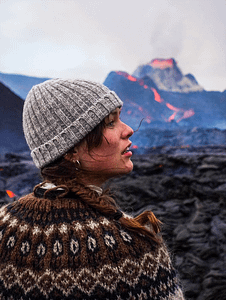 Olivia Hansen in Iceland with an active volcano in the background.

While the Vermont-based School of International Training (SIT) canceled most of its spring 2021 programs due to the pandemic, Olivia Hansen’s program in Iceland allowed students to transfer from other canceled programs to this new opportunity since it was able to continue.

Happily, Hansen, an environmental science major from Valley Falls, NY, was able to study abroad in the country of her original choice — unlike Alexyah Dethvongsa ’22, the student-experience described in the first of this series on last year’s Saint Michael’s study-abroad adventures. Dethvongsa had to study India’s health care from nearby Nepal after the India program’s last-minute cancelation.

Yet like Dethvongsa, Hansen filled her days with experiential learning. “Many of my days were spent traveling,” Hansen said. “I can describe my days in three phases:

“I studied the nutrient loads present in glacial deposition for my project. It was equal parts challenging and fulfilling to enact a scientific study completely on my own in a foreign country,” Hansen said.  From the moment she stepped off the plane to the moment she boarded her flight home, she said, Hansen was never truly alone during her time in Iceland.

As Olivia has noted on her photo, this is the famous ice diamond beach in Iceland.

“The 22 students had to quarantine in pairs and during this time we all became acquainted,” she said. “I think this might be an experience unique to SIT programs, because the programs are focused on a group of students learning together.”

For this reason, Hansen highly recommends that underclassmen take the risk and study abroad even when circumstances in the world pose certain obstacles as for her and others during the pandemic. “As a generally introverted person I always thought I’d be the last person to take the risk of going abroad,” she said. “On a campus like Saint Michael’s it’s incredibly easy to get comfortable and settle in, and while that’s comfortable, it sometimes can keep you from pushing yourself to your true potential.”

“While abroad I met the most amazing people, tried so many new and exciting foods, and discovered an independence and strength I never knew I possessed,” Hansen said. “I’d recommend study abroad to anyone and everyone because it really does have the ability to change your perception of yourself and globalize your world view.”