The last academic year was full of uncertainty for the Saint Michael’s College community. However, a few of the members in our community decided to amplify the unpredictability by studying abroad in midst of the pandemic. Alexyah Dethvongsa, class of 2022, was among the few who were able to study abroad their junior year in the spring of 2021. 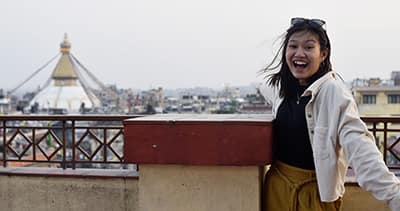 Alexyah Dethvongsa enjoys the sights of Nepal during her study-abroad experience.

Alexyah Dethvongsa believes she learned a lot from her opportunity to study abroad in Kathmandu, Nepal – even if it was in the midst of the pandemic.

Her goal for study abroad was to explore aspects of public health, gender, and community in India. She ended up having a unique experience for such a project considering that she was living in Nepal because of COVID restrictions in India. Initially, those COVID restrictions felt like potential deal-breakers for the work she aspired to complete.

Happily, however, resourceful and determined program coordinators for SIT – the School for International Training –- presented Dethvongsa, an international relations major from Laconia, NH, with the opportunity to travel to Nepal as an alternative way that she still could follow India’s Public Health Program during the pandemic, and from close cultural and geographical proximity. Dethvongsa said her time in Nepal  was “something I probably would not have done unless this situation with the pandemic occurred, and I am very thankful for it.”

Some things a person just can’t see in Vermont, such as this elephant in Nepal.

Dethvongsa’s average day studying abroad did not consist of a lot of time spent in a typical classroom. “I think SIT did a great job at incorporating hands-on learning techniques,” she said. “For the first 6 weeks, I stayed in a hotel, and we often had class outside, online, or had guest lecturers come and speak to us about anything regarding gender, health, identity, and religion. However, in the last fiyr weeks, I was living with another student in an apartment and conducting my own research. My research was a case study on Traditional Systems of Medicine and the influence of globalization through a local non-profit’s GUNi [Global University Network for innovation] initiative. This allowed me to look at what legitimacy is in the medical field, who determines it, and study the history of traditional medicine systems in India.”

Even though Dethvongsa was in a new country during the pandemic, she was still able to make strong connections with the other four students in the program. “These students pushed me to think in new ways, really helped me gain new perspectives, and were truly the strongest support system I could have asked for,” she said. “I think not having a homestay definitely contributed to the close connections we made. While I missed my family and all of my friends and the support system that St. Mikes gave me, I don’t think I struggled too much with being alone once I got to Nepal. I just realized there was so much for me to learn about Nepal and the people around me at the time.”

Dethvongsa said that she does not regret going abroad at such an unpredictable time. “The future is hard to predict, but it was truly one of the most life-changing and wonderful experiences I have ever had,” she said. Not only did Dethvongsa feel that she was able to grow professionally by making connections with professors and institutions across the world, but she felt she grew personally and spiritually as well.

“It can be very hard to leave St. Mikes, especially after COVID has cut a lot of our experiences here short, but something that helped me get through it was remembering that, while I love St. Mike’s and everything it has to offer, it remains pretty much the same while you are gone. “

“We all have our little routines here, and while it is so nice to see all of your friends all of the time while we are all still here, not a lot of changes, especially not in one semester,” she said. “Going abroad is something that I would do 100 times over, and I think anyone who is considering going should take the risk and go for it, because it truly is one of the most fulfilling and unreal experiences.”

A little monkey business in Nepal.