Both ‘gut feelings’ and practical factors weigh into transfer decisions

Beth Syverson ’23, a student writer in the Marketing & Communication Office, interviewed Anna Duffy ’23 and Benoit Fumeux ’22 about their transfer student experiences before writing a first-person account of her own story at the end of this piece:


The decision to transfer is one of the most significant and personal decisions a college student can make. Whether it is spurred by a gut feeling, as Anna Duffy ‘23 and Beth Syverson experienced, or for more practical reasons like Benoit Fumeaux ‘22, the decision always requires taking a chance.

Anna Duffy, a psychology major and education studies minor from Waitsfield, VT, transferred from Plymouth State to St. Mike’s in the Fall of 2021. She struggled in the social environment at Plymouth and stated that she only “felt like herself again” after returning home for visits. 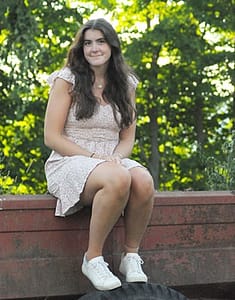 As Duffy began her transfer process, she decided to revisit the pros and cons lists for the colleges she had applied to during her senior year of high school. She remembered that her decision in the 2018-2019 school year had been a tight race between Plymouth State and St. Mike’s. Ultimately Plymouth won for two small reasons, she said: first, because she had a higher ranking on the alpine ski team at Plymouth, and second, because she wanted a different college experience from her brother, Danny Duffy, a 2018 St. Mike’s graduate.

After reexamining her decision, Duffy decided to attend St. Mike’s, but stemming from her experiences at Plymouth, she was apprehensive to “start over” socially. She said her fears were put at ease, however, after participating in an orientation activity that revealed how almost every transfer in her group had the same fear.

In response to these hopes and fears, Duffy recalled the leader stating, “Something very big changed in yourself to have the strength that say ‘I need to get out.’” Due to this simple uniting principle — despite the students’ age, graduation year, gender, and so on — none of them was as alone as he or she may have felt at that moment, Duffy said.

After orientation, Duffy said, she found her transition to Saint Michael’s to be “very seamless” and said it was “extremely easy” to fit in with the campus community. “From professors to classmates, to someone holding the door for me, it’s the little things which make St. Mike’s really feel like home,” she said.

Although she has only been at St. Mike’s for one and a half semesters, she is involved with two clubs on campus: Go Baby Go and Random Acts of Kindness. “The clubs are really great here and very easy to join,” she said.

More broadly, she also said that the school was immensely helpful in honoring her health accommodations and housing requests. Furthermore, despite changing her major upon her acceptance to the school, she obtained welcome assurances from the registrar that her graduation year would not change.

Benoit Fumeaux’s decision to transfer to St. Mike’s was heavily based on practical information instead of the gut-feeling decision that Duffy experienced. An international student from Valais, Switzerland, majoring in economics with a philosophy minor, Fumeaux ‘22 transferred from Unidistance Suisse in Switzerland in the Fall of 2020.

While living in Switzerland, he attempted to make the national alpine ski team, but unfortunately did not succeed, so he faced the question of continuing to ski or leaving the sport, Fumeaux said.

He ultimately decided to apply to colleges in the United States because he “heard it was fun to ski in the U.S. and because there was the component of ‘being a real student.’” At his previous university, a much stronger emphasis was placed on sports, so the students were not required to attend classes. Instead, they learned the material at their own pace and took exams. For Fumeaux, this matter of  “being a real student” meant an improved balance between athletics and academics and a more traditional academic schedule.

Given his high skill-level in his sport, Fumeaux initially began looking for a Division I school in the U.S. during the spring 2020 semester. After hearing from a friend about the strong team chemistry and after speaking with the coach, he decided to take the leap and transfer to St. Mike’s.

Still in the peak of the COVID-19 pandemic, however, Fumeaux said that his first semester felt isolating at times, but that being on a team really helped. Although it was difficult to meet people outside of his sport during this semester, he was grateful to have the built-in friendships that teams often provide.

In addition to being a member of the alpine team, Fumeaux is now the secretary of finance for the Student Government Association and appreciates the many events and opportunities that Saint Michael’s provides for students to meet new people. Reflecting on his decision, Fumeaux ‘22 said, “I got way more than I expected. I came for skiing, but in the end I got so much more. Through the small campus, I was able to meet many new people and build many strong relationships.”

Within my first week of volleyball preseason at Emmanuel College, on a suffocating late-summer evening in Boston, I sat alone at my desk, writing a letter to my future self. When I finished, I constructed an envelope from lined paper and athletic tape (still sealed tightly to this day) and scrawled the words, “DO NOT OPEN UNTIL MAY 2023”; my graduation year. Three years and a global pandemic later, I can only remember these two lines: “Will you even still be at Emmanuel? Because right now I’m not so sure.” Although not acted upon for another year and a half, similar to Anna Duffy’s experience at Plymouth, I was correct in my initial gut feeling that Emmanuel was not a good fit. In the spring of 2021 I started at Saint Michael’s College and have never looked back.

I began my transfer process late during the spring 2020 semester, and unfortunately had missed many of the application deadlines. For this reason, I waited and applied for midyear acceptance to my top three choices with the reasoning that if I was not accepted to any, I would wait for one more semester, and transfer in fall 2021 instead.

Around Christmas, however, I learned that I had not been accepted to any of the schools I had applied to. By this time, I had also realized I did not want to leave my home state of Vermont and that one more semester at Emmanuel would be unbearable for me.

Similar to Anna Duffy’s experience, St. Mike’s had also been my second choice after Emmanuel. Ultimately, I decided against St. Mike’s because as a native Vermonter, I wanted to experience a change of scenery.

Again like Anna,  I reflected on my pros and cons list of Saint Michael’s and decided to reach out to the new volleyball coach, Jeanne Nauheimer Dorf ’09, whom I had heard was looking to recruit for my position. I spoke with her on the phone a few days later and she shared the statement that ultimately made me decide to commit to Saint Michael’s

Like me, Nauheimer Dorf was an English major at St. Mike’s. Being a broad major in nature, in transferring I was looking for a school that went above and beyond to put a personal touch on it. In our phone conversation, Nauheimer Dorf told me that although she knew college representatives always say that their professors and students have exceptional relationships and that there was no reason for me to believe her, St. Mike’s was special. She said that the professors genuinely care about their students and build close relationships with them. Additionally, the coach told me she personally was still in contact with many of her professors.

Similar to both Fumeaux and Duffy,  I believed her and decided to take the leap. Although the deadline had passed, the Admission Office was extremely accommodating and two weeks later I started classes and practices at St. Mike’s.

As Duffy, Fumeaux and my coach all stated in different ways, the little things are what make Saint Michael’s so special. I have seamlessly built many strong relationships with faculty and students and have felt truly welcomed in the short time I have been here.

As my graduation sits merely a year away, I am excited to see how the decision to attend St. Mike’s has shaped my perspective since writing that letter three years ago.