Doing the work to understand one another is a gift that "makes God smile," noted Duke scholar and founder of Muslim Leadership Initiative says 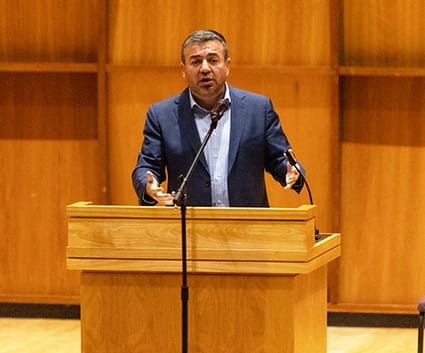 Much as Rabbi Max Wall’s outreach to Saint Michael’s College, emblematic of heroic initiatives globally, brought unimaginable strides toward reconciliation between Jews and Christians in the 20th Century given such a hard history, so now are Jews and Muslims called similarly to bring the “cosmic gift” of mutual understanding to “make God smile” in the 21st Century.

That was the humane, warm and powerful message of Imam Abdullah Antepli, associate professor at the Duke University Divinity School and founder of the Muslim Leadership Initiative, who delivered Thursday night’s annual Rabbi Max B. Wall Memorial Lecture in the McCarthy Arts Center Recital Hall at Saint Michael’s.

“What kind of gift would make the creator of the heavens and earth happy? What possible gift, through collective effort, can we offer to make God smile?” asked the respected and well-known scholar and activist rhetorically following his introduction by his dear friend, Rabbi Amy Small of Burlington’s Ohavi Zedek Synagogue, who heads the congregation long led by the late Rabbi Wall.

The first introductory speaker for the evening was Jeffrey Trumbower, Saint Michael’s vice president for academic affairs, who gave the history of this annual lecture, observing that Rabbi Wall’s daughters, Mindy Evnin and Shira Antonoff, were in Thursday’s audience of nearly 50 people with many more viewing a livestream. This annual lecture honors the memory of Rabbi Max Wall (1915-2009), long-time rabbi of Ohavi Zedek synagogue and part-time professor at Saint Michael’s College, Trumbower said.

Besides being the spiritual leader at Ohavi Zedek for decades, Rabbi Wall took groundbreaking initiative in the early 1960s to forge a lasting relationship with Saint Michael’s College, including teaching courses, initiating a Judaica collection in the library and establishing this lecture series, Trumbower said. Attendees Thursday included a large group from the area Jewish community along with Saint Michael’s students, faculty and staff.

Rabbi Small and Imam Antepli explained how Small was his teacher at an institute connected to the Hartford Theological Seminary in Connecticut at one point — a very famous program for Muslim-Christian-Jewish dialogue, while the two also both are connected to the Shalom Hartman Institute in Jerusalem.

As Rabbi Small promised in introducing her friend, Imam Antepli paused at sundown shortly after 7:30 p.m. (the lecture started at 7 p.m.) to break his Ramadan fast with water and dates as he played evocative Muslim calls to prayer on his phone — the moment imparting a gentle solemnity on already absorbing proceedings by a most polished presenter.

Part of Antepli’s message was that, as challenging as Muslim-Jewish relations have been through history, Christian-Jewish relations were arguably even far more challenging and yet their reconciliation has been able to make major strides. He said too often we take this “cosmic gift” for granted, but it was no small thing.

The Imam spoke of a “similar call and expectation of those who are able to tune into that melody” – that is, in the 21st century, “the houses of Ishmael and Isaac” have to go through similar reconciliation. “This is a moral commitment and commandment to anybody who has witnessed the miracles of the 20th Century,” he said.

He said that he calls the last century’s progress between Christians and Jews miraculous — even though we have lost some ground in recent years – in light of the horrors of the Holocaust and the fact that western anti-Semitism emanated from the actual theological teachings in Christianity for centuries, until recent years. This has not been as true for Islam, he said, since it shares so many traditions and sensibilities with Judaism.

He said the term “Judeo-Christian Civilization” that one so commonly hears is essentially a lie given the reality that the two religions shared little in the way of art, economy, political structures and other basic constituents of a “civilization’ through history. “But we can talk about Jewish-Muslim relations that way” as a civilization, “even though it wasn’t rosy,” Antepli said. He pointed out the similar theological language and religious imaginations of the two religions and the way in which both love and obey God fervently “but take it horizontally through law, interpretation of law.”

Antepli frankly confessed that he identifies as a “recovering anti-Semite,” since in Turkey where he grew up, his upbringing exposed him to sophisticated anti-Semitism of the most poison variety, from a “children’s version” of the notorious Protocols of the Elders of Zion to Henry Ford’s “The International Jew” to Hitler’s “Mein Kampf.” “I was convinced Jews as a people were irredeemably evil,” Antepli said, and he spent his early years burning Israeli flags in Istanbul and other towns. “But thankfully the God of Mercy did not allow me to live at that level of toxicity and poison,” he said. In due time and with effort he learned more about the prophet Muhammad — and how he had Jewish wives and in-laws — and learned more about the truth of Judaism from teachers like Rabbi Small.

The speaker emphasizes a point.

Thus redirected, “I took the nearest exit and drove as fast as possible away” from those views, he said, though it takes a lifelong effort to keep such early-ingrained feelings at bay. He recalled a time when he was observing pious Jews praying at the Western Wall — a sight that would have made him physically ill during his anti-Semitic youth. “But when I read translations of the prayers they say, how similarly they are singing God’s praises in a way we Muslims try to do, I was filled with an incredible amount of shame and guilt — someone honoring God in beautiful ways and me feeling hatred,” the Imam said.

He told how, through history, majority Muslim nations had significant Jewish communities, and the loss of that through ignorance and hostility is a tragedy. He feels that by comparison we are living in a dark age given the loss of cultural diversity in the many Islamic nations where those communities are no longer present or tolerated. “If we can work as hard as the forces trying to divide us and be as intentional as the people trying to make us enemies,” then Jews and Muslims can make real progress toward reconciliation, he feels. He said those who “go against all odds to make sure the groups hate one another” are really a small number with outsized power since they are so noisy.

Moving toward reconciliation requires Muslims and Jews to “take words from Sinai and Mecca seriously” and for Muslims not be so ignorant as to be vulnerable to “unspeakably silly theories” such as those motivating the recent Texas kidnapping of a rabbi and congregation. Such morally alarming and on-the-rise incidents require Muslims to “do their homework,” he said.

That means they must learn more of what Zionism really means or can mean, since to many Muslims, including his former self, the word sounds like “Jihad” sounds to American ears. Part of this imperative for Muslims would be coming to realize how Zionism is understandable as “a homecoming story for them, and there is nothing wrong with it … When the Jews left they took Zion with them and had scriptural, ethical and moral connection to remain legitimately indigenous – local and native to this ancestral land. That needs to be honored and understood.” Muslims also must understand that some of their suffering in Israel/Palestine is traceable to their own too-often corrupt leaders and dictators and is not only a result of Zionism.

Imam Antepli held the attention of the audience.

“My community is responsible to relearn” about such things, with no obligation to agree on any political situation. For their part, he said, Jews who seek greater reconciliation need to do their own moral homework to understand that Palestinian suffering is not a fiction and that “this homecoming project has caused so much death, destruction and shattering of people who were living there before 1948.” Israel has a role in creating a two-state solution, as impossible as it looks right now — “without losing any strength of your Zionism or joy and pride in the creation of Israel,” he said.

During a question session, Rabbi Small invited her friend to tell of the Muslim leadership effort he helped create to promote reconciliation. “I try to put my money where my mouth is” he said, noting he was sick and tired of common Jewish-Muslim dialogue programs in North America that see the two sides gathering to talk about nice but inconsequential topics – “Hagar, Sarah, chicken dishes, hummus” — while  avoiding real issues. He said on college campuses, such dialogue often has been little more than “singing Kumbaya,” or else to the other extreme, two sides coming with their pet self-serving facts to convince everyone how evil the other group is. What keeps his hope alive is “I believe there is so much moral decency within Jews and Muslims,” he said.

Another audience question got at the decline of interest in organized religion among today’s youth. The Imam said this does not scare him, and to an extent, delights him. “The way it has happened can even save religion from itself,” he said, since people under 35 are leaving organized religion mainly because they don’t hear anything compelling or attractive. Yet they do not become militantly anti-religious either, and are often most responsive to authentic discussion of morality and ethics with religious insights as part of that, such as in a new course he helps teach at Duke. Responding to another questioner, the speaker said he is banned from returning to his native Turkey because of his activism to promote understanding, but he wears it as a badge of honor.

A final point he covered was a “level of toxicity on college campuses that is almost out of control” on the Palestinian question and Israeli policy toward that population. He thinks the extreme views now common on this, from the extreme left primarily, “have the potential to destroy college campuses.” An example he gave was during a recent Apartheid Week at his college where a Palestinian activist earned a handsome speaker fee to spread lies and hateful messages, though anybody who was similarly anti-gay or racist would not be welcome.

“I am extremely distraught on how destructively this issue is changing the culture of free speech,” he said of what he sees as a distinctly American problem. “America’s own partisan ideological polarization and racial tensions have been imported into this conflict,” he said.

However, his mission continues undaunted, Antepli said, since he believes in his heart “we have the moral health to reject taking things out of context.” He said the problem is not religion but the perversion of religion in certain hands of a minority of extremists.

The speaker closed by saying that the word “remember” is the most repeated commandment in the Torah and Koran, and therefore, we must “remember” that neither Islam nor Judaism promotes or condones hate at its core.