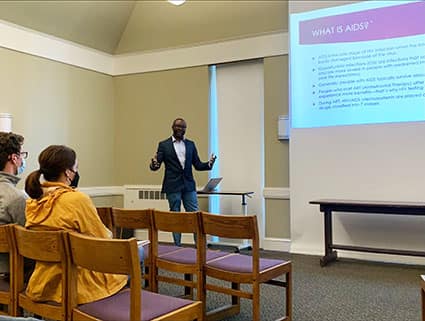 Kofi Avusuglo, PhD, spoke to attendees Wednesday night at his lecture “HIV/AIDS and Human Rights” about how people suffer more from HIV/AIDS due to marginal social standings, be it gender, race or sexuality, and he described how those inequities are being tackled worldwide through different organizations and programs.

The Center for Global Engagement, Student Global Aids Campaign, and the Community Health Action Network (CAN) at Saint Michael’s College sponsored the “HIV/AIDS and Human Rights” lecture in the Farrell Room given by Avusuglo. Students and faculty gathered at the event to hear about the work being done that is geared toward providing equitable access to health care globally, particularly in regard to the HIV/AIDS pandemic.

Avusuglo received his bachelor’s and master’s degrees, both in public health, followed by a doctorate. Before settling into his current position as health science adviser with the U.S. Agency for International Development Bureau for Global Health, Avusuglo worked in positions with the U.S. Navy and Army and in public health initiatives in Iraq on a State Department contract. He is currently an online instructor in the Saint Michael’s Graduate Health Equity Program while continuing his work in the HIV/AIDS office in his home state of North Carolina.

During his lecture, Avusuglo explained what HIV/AIDS is, described different treatment methods that are currently available, and talked about potential future vaccinations that were informed by the production of the COVID-19 vaccines. “Something good could come out of COVID, and we are excited about that,” he said. A lot of the language that Avusuglo used was familiar to attendees due to their familiarity with the COVID-19 pandemic.

Avusuglo gave a history of the HIV/AIDS pandemic from its first reported case in 1981 to today. He explained how many different humanitarian injustices informed inequitable access to healthcare and discriminatory treatment of different groups of people with HIV/AIDS, and spoke about how UNAID reported that women in Africa in 1988 were most affected by HIV/AIDS due to the lack of women’s rights/access to healthcare in those particular countries. The group that remains most prevalent in terms of HIV/AIDS numbers are Black gay and bisexual men in the United States of America. That is due to pre-existing discrimination and inequality that exists for that group.

However, there have been improvements within society to be more inclusive toward people with HIV/AIDS. Avusuglo gave the example that in 2008, the Supreme Court expanded the Americans with Disabilities Act (ADA) to include and cover persons with HIV/AIDS.

Avusuglo also emphasized how issues surrounding HIV/AIDS transcend politics, even in the United States. U.S. Presidents from George W. Bush to Joe Biden all have reaffirmed goals to fight HIV/AIDS. “HIV is the only program where we put politics to the side,” Avusuglo said. He explained how the President’s Emergency Plan for AIDS Relief (PEPFAR) program, created by George W. Bush, supports South American, African, and south Asian countries in fighting HIV/AIDS through antiretroviral treatment, stopping mother-to-child transmission, and getting people access to testing for HIV/AIDS. He expressed his excitement and pride in the progress of fighting HIV/AIDS, but remained realistic about the work that remains, “These numbers look great, but there is more to do.”

A PowerPoint was part of Wednesday’s Avusuglo presentation.

A huge part of the human rights advocacy is about crushing stigma surrounding AIDS, Avusuglo said. Reducing stigma, addressing discrimination based on HIV/AIDS status, having sympathy for gender-based and intimate partner violence are vastly important. Key populations that are most affected by HIV/AIDS are orphans, sex workers, people who inject drugs, and members of the LGBTQ community, Avusuglo said.

He spoke about how the U.N’s definition dictates that human rights “are inherent to all human beings, regardless of race, sex, nationality, ethnicity, language, religion, or any other status”  (the “any other status” section of that definition includes HIV/AIDS status). “What is important is that they are humans,” Avusuglo said.

Avusuglo concluded his lecture by informing attendees about different careers and internships available in the global health field, including but not limited to USAID, U.S. Public Health Services, and CDC Fellowships and Training Programs.