Scheduled to open in the coming academic year, state-of-the-art facility in St. Edmund's Hall will be game-changer for student projects and job credentials

A grant of $150,000 from The George I. Alden Trust — a longtime supporter of smaller Northeast colleges including Saint Michael’s — will advance the College’s Strategic Plan priority that students acquire indispensable communications skills for today’s job market. 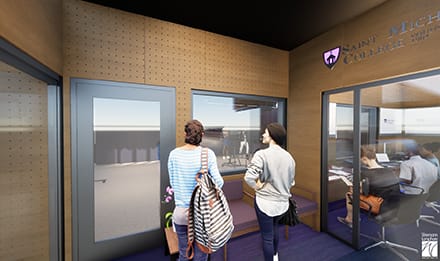 Architects’ renderings from Wiemann Lamphere show how the new Media Creation studio might appear with students once complete, in large image behind headline, this image above, and large image at end of story.

The timely grant, combined with budgeted seed funding from the College, will fund core elements for the professional-grade studio that will welcome students sometime in the coming academic year. That studio will fulfill a longstanding wish of the Media Studies, Journalism and Digital Arts (MJD) Faculty and College leadership for such a facility.

Already light years ahead of anything students previously had available for media projects, the studio nonetheless could be just the beginning of open-ended and exciting future possibilities with continued studio support, said Pat Bohan, the Media Creation studio director hired at the start of the last academic year. He and other college leaders encourage alumni and benefactors to learn more about the project and those possibilities by connecting with Bohan, MJD faculty and/or Information Technology (IT) staff.

“The Forward with Purpose strategic plan, approved by the Board of Trustees in December 2021, intentionally integrates curricular, co-curricular and career opportunities to foster intellectual and applied learning for all students,” said Davenport Brown. “The Media Creation Studio is a campus-wide initiative to incorporate this integrated learning and career preparation opportunity for all students.”

Jerry Swope of the College’s MJD faculty said that students in his department already do a lot of audio and visual storytelling, and with the studio, they will be able to bring that to the next level, enjoying greater hands-on experience with the latest equipment from the grant and earlier College funding. “This gives students in our department and across campus an opportunity to continue to develop their skills in this area and learn new skills,” said Swope.

Bohan, an experienced expert builder of such studios from earlier in his career as well as a practiced coach for college students working on high-level audio-visual projects from his years at Connecticut’s Wesleyan University before Saint Michael’s, said students “soon could be recording projects and doing videos in the new studio — professionally controlled with mixers and professional microphones. It’s professional, as if you were to go to an actual recording radio station or video production facility.”

Other studio features could potentially include at least three PTZ (Pan, Tilt, Zoom) cameras — “robotic cameras that you can manipulate with a controller in the control room,” he said. A lighting grid on top of the ceiling he describes as “basically a bunch of pipes that interconnect and can place lights upon whatever you want” — all energy efficient lights made for production, controllable from a light console … “and then we’ll also have a camera side of the studio with a large circular u-shaped curtain that will include green screen that allows you to record video on green screen where you bring it to a computer and replace it with whatever you want, not unlike weather forecasters.”

A window will let people look into the studio, allowing passers-by to see the exciting things happening. He sees nothing to stop students and faculty/staff from creating their own programming, and hopes they will. Everything will be “at least HD (high definition)” with eventual 4K capabilities on the longer-term wish list.” Other tools that future gifts might fund that he mentions for the more tech-minded include “4K field production equipment, wireless mics and more.” This latest technology fits with his longer-term vision. “Once built, I want it to be good for the next five to 10 years,” he said.

Bohan stressed that a lot of planning for the studio already had taken place before his arrival, “so I feel like I am helping put on the finishing touches after all the earlier work by Jerry Swope and Jon Hyde from the MJD faculty, Joe Pawlaczyk from Information Technology, Alex Bertoni from Marketing/Communications and others.” Swope and Pawlaczyk were part of a well-received presentation to Trustees on the studio that Bohan joined in October.

Swope and full-time faculty colleagues Jon Hyde and Kimberly Sultze have many advanced skills with which to coach their students in these projects, and veteran journalist adjuncts from the working media world will be a strong resource too for the coming semesters. Having quality “field equipment” for students to bring out in the world for interviews will make a huge difference in such projects he said.

Beyond his own department as examples, Swope said, he is aware of a regular podcast assignment from biology colleagues that will make direct good use of the new studio, and history students interesting in doing oral histories will greatly benefit too. Further, the College itself can use the studio to create marketing materials for a range of uses, including possibly promos during NE10 athletics online broadcasts. “Or, for a kid who may want to live-stream a tiny music concert on YouTube, they can do that, too,” he said.

Irvine explained the case she made to the Alden trust in applying for the media creation studio grant:  “Across all industries, communication and presentation skills are now considered hard skills,” she said. “The use of technology, communication platforms, data presentation, public speaking, project management and editing (both written and visual communication tools) are required to be demonstrated i.e. skills a candidate has already acquired prior to employment and are central to the job.  These skills are required across industries.”

“The Media Creation Studio will offer opportunities for all students, regardless of major, to hone their skills and develop a portfolio of demonstrated communication abilities and experience.  This is critically important in today’s job market,” she said.

About The George I. Alden Trust

The Trust supports independent colleges and universities with full-time traditional undergraduate enrollments of at least 1,000 students (headcount) and with a total undergraduate and graduate student population (full-time equivalents) of under 5,000 in the six New England states, New York, Pennsylvania, and New Jersey, plus a few grandfathered institutions inside and outside the nine-state region.

The Trustees seek to support institutions that demonstrate a combination of educational excellence, exciting and forward looking programming, and efficient and effective administration. They look for projects that contribute significantly to the intellectual growth of students, enhance an institution’s mission, and lead to solid preparation for lifelong learning and post-college careers.

The Trustees focus their grant-making on capital needs. In recent years, the Trust has supported projects that directly impact the quality of the delivery of the school’s undergraduate, academic offerings across its academic disciplines, including the liberal arts and sciences, the fine and performing arts, technology, and professional programs. This has included grants to upgrade or construct classrooms, libraries, laboratories, auditoriums, learning centers, and new and/or renovated academic buildings as well as the purchase of equipment and furnishings for any of these academic settings. The Trustees primarily make outright grants but occasionally will issue challenge grants with the goal of helping an institution generate increased and broader philanthropic support from its constituencies.

An overhead cutaway view from the architects.