Catholic leader on climate change to be Commencement speaker 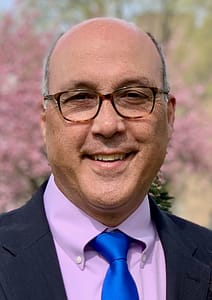 Daniel J. Misleh, a prominent spokesperson on the Catholic approach to climate change and founder of Catholic Climate Covenant, will be the 2022 Commencement speaker at Saint Michael’s College during this year’s ceremony on Sunday, May 15, President Lorraine Sterritt announced.

“Our shared faith, concern for the environment, and commitment to social action will ensure a wonderful and meaningful commencement address for our graduates and guests,” President Sterritt said of the selection. Misleh also will receive an honorary degree.

Catholic Climate Covenant that Misleh founded is a partnership of 20 national Catholic organizations engaged in a serious and sustained conversation about climate change, focused on promotion of the common good, protection of the poor, and the exercise of prudence. The Covenant’s outreach, organizing, and advocacy efforts have attracted more than 30,000 Catholic groups and individuals to support and carry out its mission. The group also provides educational materials to youth, young adults, parishes, and other Catholic organizations.

Under Misleh’s leadership, the Covenant has launched Catholic Energies, a program designed to help Catholic facilities realize significant savings through smart energy efficiency and renewable energy technologies, particularly solar. To date, Catholic Energies has installed $20 million of solar projects in 14 states and territories. The project is one way for parishes, schools, and other entities to live up to the challenges outlined in Pope Francis’s landmark 2015 encyclical, Laudato Si’: On Care for Our Common Home.

Misleh has addressed countless audiences from national environmental and religious leaders to high school students and teachers. He has written numerous articles and has been quoted in The Washington Post, New York Times, Catholic News Service, America Magazine and National Catholic Reporter, among others.

For 40 years, Misleh has been involved in the social mission of the Catholic Church, since his own Catholic undergraduate education at Xavier University in Cincinnati and two years volunteering in Alaska with the Jesuit Volunteer Corps. He holds a master’s degree from the Franciscan School of Theology in California. In 2015, he received the Harry A. Fagan Award by the Roundtable Association of Social Action Directors for his “unique contributions made to the achievement of the Catholic vision of social justice in the national or international community.”

Prior to founding the Catholic Climate Covenant, Dan served the U.S. Conference of Catholic Bishops first as a policy advisor and then the Director of Diocesan Relations for the Department of Justice, Peace and Human Development (1995-2006).

He has trained Catholic leaders around the country in the principles of Catholic social teaching, parish social ministry, community organizing, and the Catholic approach to issues such as agriculture, environment, criminal justice and the death penalty.