For biology students, trail cameras give peek at life around logs

Now they will analyze images from 22 cameras showing everything from bobcats to birds of prey and deer going by, leading to paper or conference presentations 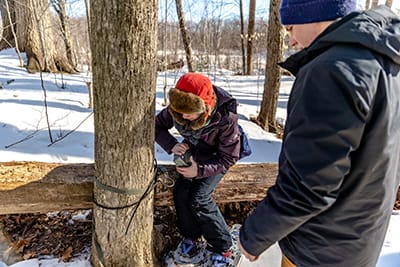 Students collect a trail camera positioned right by a fallen log during a recent weekend trek. (All photos by Patrick Bohan)

Watch a video capturing the sights and sounds of a recent student trip into the natural area to collect trail cameras.

If a tree falls in a forest and a trail camera is there to record it, is there something to see?

An answer to this variation on a well-known philosophical question about falling trees and sounds would be a resounding yes from Saint Michael’s biology students who recently collected 22 trail cameras from the College Natural Area. They plan to analyze images of life around fallen logs and other questions about the natural world through the images.

A student who helped lead the recent camera-collecting excursion, Tim Strzepa ’22, finds that life in nature is quite a sight indeed. “Bobcats carrying squirrels and the flying birds of prey are some of the coolest images we have seen in recent months,” he said. “Throughout the thousands of images I have looked through, those always take my breath away. Some of the deer images have been really cool as well, especially when the males have a prominent rack. We have also seen a few instances of coyotes.” Snowshoes from the Biology Department made the winter camera collection easier.

Strzepa, an environmental science major from New Hartford, CT, and some classmates are taking part in this project through a higher-level biology course (senior research, BI-420). “For this project, we were analyzing the use of logs, so we set up control sites as well as study sites. Of the 22 cameras we placed in the Natural Area, 11 were no-log sites and 11 were log sites,” he said. “We looked for larger logs that animals could use for navigational purposes. Our determination is often impacted by the surrounding landscape and finding trees with a large enough diameter to strap cameras to.”

He and Professor Declan McCabe of the biology faculty, a leading steward of the Natural Area, agree that the trail-camera project can assist in promoting better conservation within the area.  “This research will aim to show the benefits of these downed trees and in doing so support the push to conserve our forested areas,” Strzepa said. “I also think this demonstrates a need to let nature do what nature does and not meddle with natural processes. Clearing a downed tree may first appear to be a good idea, but our study hopes to show this might not always be the case.”

McCabe described some of the project particulars: files from the trail cameras now will be uploaded to a shared drive. “The students divide up the cameras and work through ‘their’ cameras as their schedules and lives permit, often solo in the dorm,” he said. “It’s sort of a stress reliever I think to go through a bunch of fuzzy critter photos, record data, and occasionally find a spectacular bobcat.”

Eventually from the data set that builds, they arrive at figures with scientific meaning, and a paper typically results to be presented at scientific meetings. This year with the pandemic, however, McCabe said, “I felt it better to publish a paper this time on our findings rather than get canceled out of yet another in-person conference.”

All three students from the recent camera-collecting trip unfasten a trail camera in the Natural Area.

This most recent study has been ongoing since July, McCabe said, but it builds on a previous study started by two graduates from the Class of 2020, Lauren Dunn and Risa Berman. “There’s a small army of students currently involved,” he said, “and some received credit last semester; some this semester.”

While nobody earned credit for the placing of the cameras in July – students came up from home, stayed in a hotel for two nights, set up the cameras, and went home – it still proved worthwhile on several levels, McCabe said. “That was a new approach, but the cameras gather data unattended so it’s a nice way to get data for a fall research experience before the experience begins.”

McCabe said the research question for the latest study is this: “How are fallen logs used by mammals in the Natural Area?”  The students look for animals on and off the logs at the 11 “log sites” and animals at the 11 “non-log sites,” so they end up with observations in three categories: Log sites with animals on log, log sites with animals off log, and non-log sites. Animals are scored as moving along logs or over/across logs. “Many other animals tend to move along the length like it’s a bridge through vegetation,” he said.

“In Risa and Lauren’s work we learned that there were roughly six times as many observations on logs as off. Risa and Lauren worked strictly in summer/fall.  The new project replicates that and adds winter conditions with snow cover,” McCabe said.

The inner workings a trail camera, with a card from which to collect images.

“My gut suggests that snow cover will be a great equalizer and will take away whatever advantages walking on a log may have had in terms of easing travel through the environment — but hey, I’m an insect ecologist, so who really knows what we’ll really find?  Welcome to science! The students will learn along with me.”

He said one big reason for having the cameras out from July through February was to expand the existing study into winter; also, the cameras get used by the Behavioral Ecology class in February, and beyond that, “Every study needs a stopping point,” he said.

The students put in fresh rechargeable batteries in November and again during their first weekend back on campus. Students in a course taught by the Biology Department’s lab coordinator, Instructor Brian Swisher, will design the next setup for the trail cameras. Grants and departmental funds made purchase of the cameras possible. “We use Browning cameras because they are reliable and sensitive to animal movement,” McCabe said. “They run for months on a charge unless they are repeatedly triggered by a waving fern frond (or the like) sticking up above the snow.”

A close-up of a trail camera strapped to a tree.

“Before the advent of trail cameras, a biologist could spend a lifetime in the woods and not get the quantity of data we can get in a month,” McCabe said. “After peeking through these photos I regularly see mammals walking on logs and quantifying that in a rigorous way is actually a new contribution to science. There also is sometimes competition for fallen logs: loggers want them and in a process called salvage logging. Our study may result in a different viewpoint on the value of fallen logs for mammals like bobcats.”

After collecting the cameras, students head back up a snowy hill in the Natural Area on Feb. 13.