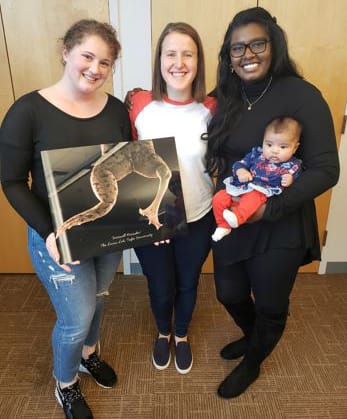 Kelsie Miller, a 2016 Saint Michael’s biology graduate, had a key role in some recent science news that was exciting enough to rate reports in The New York Times, Wall Street Journal, England’s Guardian, Smithsonian Magazine and even a mention during comedian Stephen Colbert’s “Meanwhile” segment of his popular late-night show.

The Guardian report cut most clearly to the chase: “A frog has regrown a lost leg after being treated with a cocktail of drugs in a significant advance for regenerative medicine,” read the major international paper’s report about a discovery by a group of Tufts University researchers that included Miller.

“This is a very amazing first step toward exploring application of short-term drug cocktails rather than long-term treatments for re-growing limbs in amphibians,” Miller said in response to a Saint Michael’s inquiry about the research. “But also a great first step to beginning exploration of this kind of treatment in mammalian models. It is a long way from re-growing an amputated human leg, but it is exciting way to get the ball rolling!”

Inspiring the widespread media attention was a paper appearing recently in the journal Science Advances, with lead authors including Michael Levin who directs the Allen Discovery Center at Tufts, where Miller worked from 2018 to late 2020 as a key team member.

She explained her own role in the research leading to the article, for which she receives a credit. The title is:  “Acute multidrug delivery via a wearable bioreactor facilitates long-term limb regeneration and functional recovery in adult Xenopus lavis” – a species commonly known as African clawed frogs:

“As third author on this paper, I participated in surgery, animal care, and all post-processing of samples such as RNA extraction and analysis, immunohistochemistry, imaging, and more,” she said. “The work began only a few months before I started but continued throughout the entire duration of my time at Tufts University so I was a major contributor for the project.”

After graduating from Saint Michael’s, Miller went on to graduate school at the University of New Hampshire, where she earned her biology master’s with research focused “on how stress imparts sex differentiation in fish.” Her role with Tuft’s Levin lab came after that, “Mainly supporting post-docs with their research examining regeneration in planaria flat worms and supporting the research trying to regrow frog legs!”

“I am forever thankful for the community of friends and family – I married my husband, Sam Hammond ’15, this summer – that St. Mike’s has given me,” Miller said, explaining how part of that would be influential mentors from her years playing varsity field hockey to research mentors on the science faculty. Her now-husband was himself a Purple Knight student athlete as a Nordic skier and men’s cross-country runner.

“I ended up at St. Mike’s after being recruited for the field hockey team,” she said. “I absolutely loved campus and the community that was apparent from the moment you walked onto the grounds.”

She also appreciated “the close contact with professors with smaller classroom learning than most of the other schools I looked at.” Her four years playing field hockey included being co-captain and then caption her last two years. She also was a resident assistant for three years and a tutor through several programs. As a senior, she won one of two Keleher Awards for the best female and male student athletes.

Miller during her internship in North Carolina studying lionfish.

“Declan McCabe was my adviser in biology and gave me lots of great advice and taught me so much about finding a love for science and the scientific process” she said.

Her love for fish leading to her master’s studies “came from [now emeritus] Professor Doug Facey’s Ichthyology class that I took, and the summer research I did with him o Lake Champlain,” said Miller, who won a National Oceanic and Atmospheric Administration Hollings Scholarship her junior year that allowed her to intern in North Carolina studying the invasive lionfish there.

“While I may not have pursued my passion for fish for the long term, the experience I had at St. Mike’s really pushed me to get out into the world and explore new options for opportunities outside of my comfort zone,” she said. “That is really how I am where I am how, working in the biotech industry. I feel really thankful for the experiences at Saint Michael’s that pushed me to grow into the scientist I am today.”