With Memorandum of Understanding, the College and international partners can make most of established relationship, cooperating in areas such as environmentalism, with reciprocal study group visits 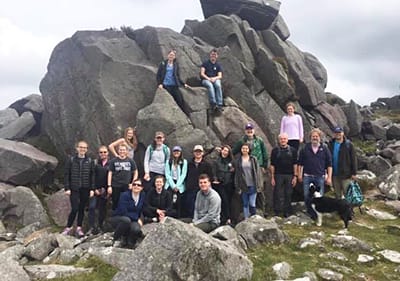 A Saint Michael’s group on a study trip to Wales joins colleagues and host students on an excursion during one recent visit.

A fruitful relationship that Saint Michael’s College has cultivated with the University of Wales Trinity-Saint-David in recent years is advancing to the next level: The two institutions have just agreed to continue expanding academic collaboration and deepening their international partnership by signing a formal “Memorandum of Understanding” this past November 2021.

For over six years, Saint Michael’s has had an expanding relationship with the university in Wales, including academic study trips led by Saint Michael’s faculty in 2015, 2017, and 2019. Professor Jeffrey Ayres of the Political Science and International Relations Department and Professor Laura Stroup of the Environmental Studies and Sciences Department led the most recent trip in May of 2019, while Professor Ayres co-led the first two trips with Professor Emeritus of Art Education Jonathan Silverman.

Also, in June 2019, Saint Michael’s hosted UWTSD colleagues Professor Alex Bell, senior lecturer in business and digital learning, as well as Professor Louise Emanuel, lead for Carmarthen business portfolio, on campus. This visit was a part of ongoing plans to develop a similar summer academic study program on sustainability in Vermont for Welsh students from UWTSD who would visit Saint Michael’s.

The past Wales study trips brought Saint Michael’s students to the UWTSD campus located in Carmarthen, Wales in the United Kingdom. The trips included historic cultural field study, academic lectures, outdoor recreational hiking, and research collaboration, while the academic content of the course focused on understanding how Wales has incorporated ecological sustainability into its culture and institutions.

Professor Ayres, who currently serves as the inaugural director of the new Center for Global Engagement (CGE) at Saint Michael’s as well as Interim Dean of Faculty, said the recent memorandum of understanding “indicates a commitment on the part of Saint Michael’s to deepen our relationship with the University of Wales Trinity-Saint-David, as both of our institutions share a strong commitment to environmental sustainability and internationalization.” Further, he said, the initiative will support the mission of the CGE, providing “a wide array of opportunities for Saint Michael’s students, faculty, and staff to celebrate global citizenship and active engagement in a global community.”

The agreement aims to formalize this more active engagement between the institutions, beginning in 2022, with study trips to Wales by Saint Michael’s students. Reciprocally, students from Wales would come to Saint Michael’s for part of the 2022-23 academic year, tapping funding in part provided from the United Kingdom government’s “Turing Scheme” and the new Welsh Government International Learning Exchange Fund for Wales.

Saint Michael’s visitors with hosts in a classroom at University of Wales Trinity-Saint-David one recent year.

Professor Ayres said some additional planned initiatives include the development of a possible student and faculty exchange program focusing on Wales-Vermont sustainable business practices, shared undergraduate and graduate degree programs, and Saint Michael’s students participating in semester-long study abroad programs at any one of the three UWTSD campuses.

The latter initiative offers students the opportunity to study in Carmarthen, Lampeter, or Swansea. Carmarthen, or Caerfyrddin (in Welsh meaning “Merlin‘s City” purportedly because it is known as the birthplace of the wizard in the legend of King Arthur and is considered by many to be the oldest town in Wales). The historic Swansea College of Art, founded in 1853, offers wide-ranging courses in fine art, film and television, graphic design, photography, creative music technology, performing arts, and much more, Ayres said.

Professor Jeffrey Ayres, back left, and his colleague Professor Laura Stroup, back front, host visitors Professors Louise Emanuel and Alex Bell from the University of Wales Trinity-Saint-David at the Burlington Waterfront in June 2019