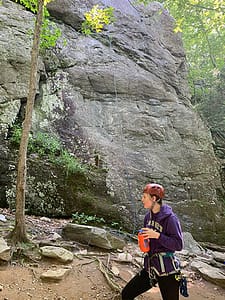 Jocelyn Savard ’24 out in the mountains on an Adventure Sports Center excursion with the College earlier this year.

A jack-of-all-trades, Jocelyn Savard ’24 is casting a wide net both in the professional and extracurricular worlds as she spends this summer on campus training with the Adventure Sports Center to gain her Undergraduate Professional Endorsement for adventure sports coaching.

Her criminology and religious studies majors were born from a combination of impactful professors at Saint Michael’s as well as an inclination to make the world a better place. “I chose to become a religious studies major after taking a very interesting class with Professor Ray Patterson,” said Savard, from Wilmington, NC, who also has a minor in psychology. “I wanted to continue to have classes like that with such fascinating material.”

Jocelyn Savard ’24 when she was a member of the College women’s swimming and diving team earlier in her College career.

Savard said she knew that she wanted to go to school in New England, and after looking into Saint Michael’s, she “fell in love with it.” Since arriving on campus, she has made the most of the College’s many distinguishing opportunities such as the new UPE program and adventure sports.

Undergraduate Professional Endorsements are degree enhancements for Saint Michael’s students that allow them to receive credentials in various areas of the professional world. It is advantageous for Saint Michael’s students to obtain a UPE in order to set themselves apart while applying for jobs, pursuing a passion while gaining credentials, and gaining skills that are transferrable into post-graduate life. Saint Michael’s College offers UPEs in adventure sports coaching, emergency medical services, leadership, non-profit management, organizational management, sports coaching, and sustainable management.

When it comes to her criminology major, Savard is interested in working in the prison system, “specifically in ways to reform it in order to rehabilitate inmates such as working with programs such as Pawsitive Partners Prison Program or in forms of recreational therapy with juveniles,” she said.

Though working within the prison system is her long-term goal, Savard has her goals set to work in adventure sports coaching in some form or another for a few years upon graduation. “My biggest motivation to continue to get certified right now is to create as many pathways as possible for an array of careers upon graduation,” she said.

The Adventure Sports Center created an avenue for Savard to become more active in the outdoors. As a first-year at Saint Michael’s, she said, it was a flyer advertising the Mountain Leadership course that led Savard to the Center. “Prior to becoming involved with the Adventure Sports Center, I had not been very involved in outdoorsy activities,” she said, “I’m very fortunate to have found a place and a program that give me these opportunities.” She thoroughly enjoyed the activities in the Mountain Leadership course and really enjoyed the people involved. “The instructors who led our trips were so enthusiastic and passionate about the Adventure Sports Center and the activities we were doing that it also caused me to become more interested,” Savard said.

Mountaineering has risen to the top of Savard’s list of favorite outdoors activities, “with ice climbing being a close second.” The Adventure Sports Center gave her an avenue to try different outdoor activities at a fraction of the price that it would take to learn outside of Saint Michael’s. “A day out ice climbing with the Adventure Sports Center is only about $15, but to do it outside of Saint Mike’s would be more than $200,” she said.

Her funniest memory occurred while snowshoeing in the Mountain Leadership course. “We accidentally went off the trail and eventually all of our phones went off with ‘Welcome to Canada’ messages, which was when we realized we weren’t on the trail anymore,” she said. The group returned safely, and Savard is now co-teaching the Mountain Leadership course.