With support from mom and St. Mike's, Katie Escobedo '23 agrees to have head shaved to honor one late hero patient, spurring donations through "St. Baldrick's" event 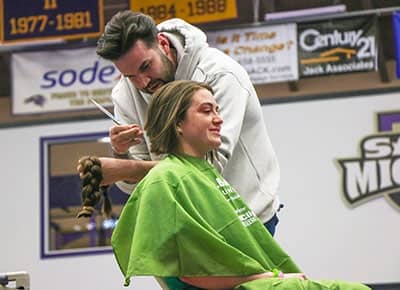 Katie before the head-shave. (photos by Peyton Edwards ’23)

In a time when returning to in-person events on campus has yielded sparse student turnout, the St. Baldrick’s event in Ross gym rallied hundreds of Saint Michael’s students to show up and show out for childhood cancer research.

Katie Escobedo ’23, a Saint Michael’s athlete, fire and rescue volunteer, psychology major and worker in the Admission Office from New Rochelle, NY, was the event coordinator of the first ever St. Baldrick’s event on the Saint Michael’s College campus. The April 29, Friday evening event honored the memory of Cayllie Lipford, a recent nursing graduate and patient of Katie’s mom who died this past winter of a pediatric kidney tumor.

The St. Baldrick’s Foundation is a not-for-profit organization with the aim of raising funds to help find cures for children with cancer. The name of the foundation is not associated with a recognized Saint of the Catholic Church, but is founded on word play and appropriation of the title of sainthood.

To attract so many supporters for such a cause, the organizers featured popular attractions for college students — cornhole, pizza and wings, raffles – but by the end, several attendees felt inspired spontaneously to join the nine pre-recruited “shavees” who including Katie. The Ross gym was buzzing as hundreds of students showed up to support Katie and St. Baldrick’s through their participation and donations.

In total, the event raised $28,462 by the end of the night – which the organizers considered a major success considering Katie’s overall goal for the event was $20,000.

Ginny Escobedo, Katie’s mom, and multiple-time St. Baldrick’s event support volunteer, gave a speech to the attendees before Katie shaved her head. “We have never had a turnout for St. Baldrick’s like we have at St. Mike’s,” she said, “so give yourself a round of applause.”

Knowing that Katie had not yet seen the amount of money that the event had raised from the morning, Ginny went on to reveal that, already at that time, the event had raised $25,000 in support of childhood cancer research. Katie broke down in tears of gratitude at the news.

Ginny gave the attendees insight into her own experience treating and getting to know Cayllie while she was going through treatment. “The entire St. Baldrick’s event tonight is for Cayllie Alicki Lipford,” Ginny said, “A few years after graduating nursing school, Cayllie was diagnosed with Wilms Tumor, a pediatric kidney tumor. While this cancer occurs in children, it is treated the same way in young adults. After multiple relapses and four years of fighting, Cayllie passed away.”

Ginny explained that after several relapses, Cayllie knew she would not survive the tumor, so she submitted herself to two clinical trials in the hope that even though they would likely not help her, they would be able to help someone else. Several students in the audience wiped away tears as they learned the story that inspired the event.

Ginny concluded her speech saying that she “can’t promise Katie can shave her head every year,” but Ginny would be willing to come back next year to coordinate another St. Baldrick’s event. The crowd of students in the audience erupted in affirmative cheers and applause.

Audience members, supporters and volunteers were attentive and spirited at Friday’s event.

Emotional, Katie took the stage to shave her head. She donated her hair as well to Wigs for Kids. Cheers and applause erupted around the gym. The Saint Michael’s women’s soccer team came forward to sit closer to the stage in support of their teammate and swarmed her with a group hug and several head rubs once her shave was complete.

The Saint Michael’s student body was incredibly encouraging of Katie and showed up in numbers unseen since pre-COVID for an event that felt important. The positive energy and support from the student body was palpable not only in terms of blowing the donation goal out of the water, but also in spontaneous shavees, and cheers of support for their peers.