The first of two early-summer academic study trips for Saint Michael’s students left May 17 for Japan, according to Peggy Imai, Saint Michael’s College director of study abroad, while a group heading to England to study “Shakespeare in Performance” was scheduled to leave today, May 23.

Of the Japan group and their first few days abroad, Imai said: “The students in Japan are doing great and starting to post reflections on the trip’s blog site. So wonderful to see them out and about, trying new things, and learning about Japanese culture and customs. This is what these trips are all about!” 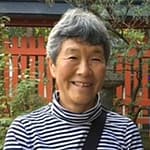 Hideko Furukawa was raised and educated in Kyoto, Japan, and taught Japanese language and culture at Saint Michael’s College for 29 years before retiring in 2015. She led two successful Academic Study Trips to Japan with Saint Michael’s students in 2013 and 2019. Many of Professor Furukawa’s former students are now living and working in Japan at different professional positions and levels. She has lifelong personal and academic interests in Japanese art.

Co-leading this study trip is Jonathan Silverman, professor emeritus and former chair of the Saint Michael’s Education Department. He coordinated the arts education program, and taught courses on the creative process, integrated curriculum, and aesthetic perspectives for many years. He has led multiple study trips abroad that include Italy, Greece, United Kingdom, and most recently to Japan in 2019. Professor Silverman has also been a faculty adviser on MOVE service-learning trips to Florida, Texas and the Dominican Republic. MOVE, an acronym for Mobilization of Volunteer Efforts, is the volunteer service arm of Edmundite Campus Ministry at Saint Michael’s. In the fall of 2019, Silverman was a visiting professor at Doshisha University in Kyoto teaching in a holistic education program. He maintains his artistic identity through ceramics, watercolors, and drawing and is an avid baker.

Here is a summary of that Kyoto course, which seven students are joining:

In this two-week course students will be immersed in the rich aesthetics of Japan. Based in Kyoto, students will witness the interplay between arts, history, spirituality, education, culture, and the environment. We will be based in the world heritage city of Kyoto with its many temples, shrines, gardens, and studios to explore, and nearby to historical villages and cultural centers.

With students from Kokugakuin University in Shibuya on May 20.

Students will have the opportunity to engage in art forms such as ceramics, dye, or ink and brush painting, interact with local artists and educators, and sample authentic cuisine. By witnessing the interplay of tradition and modernity, symmetry and asymmetry, and form and function students majoring in any discipline will be inspired to develop their own creative project. AR 262 together with the 2 credit pre-requisite course in the fall (AR 261) fulfills the Arts and Literature Core Requirement.

These are the faculty leaders for a summer study trip titled “Shakespeare in Performance,” which just departed Monday, May 23 with 13 student participants:

Kerry Shea is an associate professor in the Saint Michael’s Department of English. She teaches courses in Early English Literature, Film Studies and Fantasy Literature and is currently at work on a full-length project on the eco-feminist fantasy writer Sheri S. Tepper. Professors Shea and Christina Root led a remarkably successful study trip to England in 2018 where the group was able to attend performances of Macbeth, Hamlet, King Lear, As You Like It, The Merchant of Venice and Midsummer Night’s Dream. When not immersed in in the intricacies of Medieval literature or Fantasy, she can be found wandering through the mountains and forests of northern New England and New York.

Christina Root is Professor of English and Director of the Saint Michel’s Humanities Center and Program. She teaches 19th century English fiction and poetry, as well as comparative romanticism and environmental literature. Her research has most recently focused on the English writers E.M. Forster and Ian McEwan. In addition, of course, she is an avid student of Shakespeare and was thrilled to be part of the 2018 study trip and to have the opportunity to attend such extraordinary performances of his plays.

Here is a summary of that England study trip.