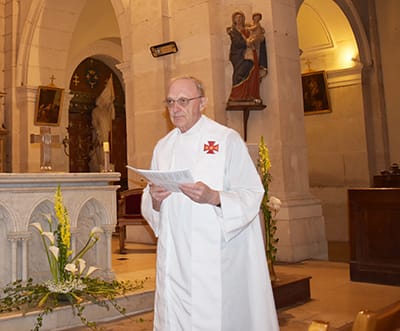 Fr. Marcel Rainville, S.S.E. ’67, says Mass in France during a previous College-sponsored heritage trip, in the Church of St. Martin in Avallon, site of milestone inspirations for Edmundite founder Fr. Jean-Baptiste Muard. (Photos courtesy of Laurie Sabens, and Louis Giancola for two with him)

Like many native Vermont students arriving at Saint Michael’s for college in the mid-1960s, Fr. Marcel Rainville ’67 and Louis Giancola ’68 brought high hopes and the promise of solid working-class family backgrounds and values, but were yet to glimpse much of life outside their native state.

This past year as together they began organizing a pandemic-delayed trip to France with Saint Michael’s College President Lorraine Sterritt for June 2022 to visit important sites in Edmundite history, Marcel Rainville and Louis Giancola clearly have come — and gone – a long way since college, even if on distinctly different paths.

An earlier planned 2020 Edmundite historical tour had to cancel during the pandemic, but most of the would-be travelers opted for travel credit and will be joining the 2022 tour of just over 30 people including President Sterritt, who earned her doctorate at Princeton in French literature and speaks fluent French, as does Father Rainville.

Giancola, another solid French speaker, said his connection to Saint Michael’s spans 50 years — first as an undergraduate French literature major in the Class of 1968 during Fr. Rainville’s era as a student, then as a graduate of the MATESOL program, later still an adjunct faculty member in Applied Linguistics — and now the Edmundite tour coordinator. With the trip appearing to be a “go” in June 2022 after some months of uncertainty over COVID and other concerns, tour members excitedly anticipate this encore variation on a long-popular semi-regular series of Saint Michael’s Edmundite heritage tours dating back to 1998, after the relative limiting isolation of two pandemic years.

Beautiful countryside and villages off the beaten tourist paths are on the coming trip.

French roots run deep for Fr. Marcel who grew up on a Swanton dairy farm among 10 siblings speaking French-Canadian patois (Joual). In 1971, he was ordained an Edmundite priest, and this past June he celebrated 50 years of ordination. “I’ve helped with at least 15 of the College’s historical heritage trips to France begun in the late 1990s by former President Marc vanderHeyden and his wife, Dana,” said Fr. Rainville. His earliest trips to the land of his ancestors, however, were not as a college tour leader but, rather, to raise funds in 1979 for his mission churches in the barrios of Venezuela, where he served for more than two decades. His Venezuela ministry lasted from 1967 through 1988.

Fr. Marcel playfully demonstrates for 2018 travelers how the residents/priests used to have to wash outside.

Fr. Marcel did not join the very first Edmundite heritage trip with the VanderHeydens in 1998, but then got involved in 1999 “and from then on, I’ve led or been involved in at least 15 trips,” he said.  Main points on the typical tour are Auxerre, Avallon, Pontigny, Burgandy/Normandy, Chartes Cathedral, Saint-Malo, Mont Saint-Michel and the port city of Honfleur, which is sister city to Burlington (VT), along with some days in Paris at the start and end. Fr. Marcel’s own ancestors left from Honfleur to Canada many generations ago, he said, so the city holds special interest to him and his sisters.

The popular, mild-mannered priest says he has enjoyed the great variety of Saint Michael’s community members who have joined these trips through the years. These include most of the resident Edmundite priests and brothers at some point, and faculty and staff members of all faiths (or no faith) who glowingly tell of trip rewards well beyond its religious pilgrimage opportunities. Others to join in the past have been trustees plus various interested community members.

Fr. Marcel particularly has enjoyed giving homilies in French, including at majestic seaside Mont Saint-Michel, once under the care of the Edmundites; and visiting the nearby World War II D-Day invasion beaches and cemetery at Normandy. Joining so many heritage trips has inspired in Fr. Marcel a great interest in the history of France during the period when the Edmundites had to come to North America due to societal pressures, along with his interest in the order’s social service legacy amid political intrigue and ferment in earlier decades.

Fr. Marcel and his two sisters & brother in law in front of the Arc de Triomphe in Paris.

“In light of who we are as Edmundites, all this is essential to understanding,” said the priest. “I could see in this history, which comes to life so vividly on the heritage tours, that the Edmundites have always had a special outreach  to the poor and non-churched. We can see where our whole involvement in social justice, through the Selma and southern missions in particular, came about as a consequence of what it means to be Church and reaching out to the marginalized, going back to the beginning.”

Giancola is a big fan of Fr. Rainville going back to their student days in the 1960s, and even more so after touring with him. “I think he’s a very humble man considering all that he does — on the last tour he had health issues but he did not let that stop him. He did the homilies in French, organized gourmet luncheons … He is gifted in so many ways and was wonderful to work with. I think we made a good team.”

A Rutland native of Italian heritage and a first-generation college graduate in his family, Giancola chose to major in French literature at Saint Michael’s. He studied abroad in Paris through an early UVM program, with extensive European travel while still an undergraduate, got his master’s at Middlebury and had a varied teaching career, including as instructor of English as a second language (ESL) and helping resettle refugees in Vermont.

A gourmet luncheon at an establishment that a friend of Fr. Marcel runs.

He said that he and his wife, Mary, some years ago privately organized a few trips to Italy for family and friends and greatly enjoyed the experiences, helping them realize their knack and passion for travel organizing. That explains why, when Fr. Marcel approached Louis Giancola after Mass at the St. Mike’s Chapel in 2017 to ask if he might help the overextended priest with logistics on a coming planned French Edmundite heritage trip, Giancola was anxious to help. “My wife calls me his aide de camp,” Giancola says with amusement.

Saint Michael’s first came into Giancola’s consciousness as a young man. “I first came here in 1963 on a CYO retreat from my Rutland Catholic High School, Mount Saint Joseph,” he said. He chose to return for college since it was “small and familiar for a Vermonter who’d not been anywhere in the world.” At the time, Saint Michael’s was not even coed. Since during his senior year in 1967-68 Saint Michael’s had no study abroad program, the College granted him permission to attend a University of Vermont overseas study program in France.

“I spent my senior year in Paris for orientation for six weeks, then to University of Nice,” he said.  Being in France allowed him wonderful vacations from school terms there and he traveled all over Europe — to Italy, Spain and Switzerland. After returning to Saint Michael’s and passing his demanding comprehensive exams or “comps” of those days, he decided to pursue a master’s in French at Middlebury, which was world-renown even then for its language programs.

Louis at Pontigny on an earlier Edmundite heritage tour.

Intervening years found him teaching French at several Vermont schools and for a time in New York City. While teaching at Rice High School in Burlington he got the idea from his real estate developer brother to obtain a real estate license so he could sell in summers, so he did, leading to a job at Vermont Housing Finance Agency where he was community relations coordinator in the late 1980s and early 1990s.  The work involved traveling all over the state presenting to everyone from bankers to home buyers – work that appealed to a true “people person” like Giancola —  yet he missed what felt like his true calling in teaching, so he signed on with the Refugee Resettlement Program in Vermont. That led eventually to him seeking his ESL master’s from Saint Michael’s.

“I loved coming back to Saint Michael’s from 1993 through 1995,” he said, explaining that he connected well with MATESOL program faculty who hired him eventually as an adjunct. He also stepped up his work with refugees through Vermont Adult Learning. “So for 25 years I taught ESL to immigrants and refugees in a suite of classrooms in Sloane up on North Campus” while at one point doing a project with Green Mountain Nursing Home that led to a book called Senior Stories. His ESL students helped with interviewing seniors for the book.

“It’s all about the mission of service here at Saint Michael’s so I was pleased I could be part of that,” said Giancola who decided to retire for a time; but Refugee Resettlement coaxed him back to teach citizenship in 2017-2018. Once again, Saint Michael’s came through with classroom space. Meanwhile, his wife, Mary, a retired medical social worker, had in her career frequently found herself alongside Edmundite chaplains for years in nursing homes and hospitals where she worked, and so had a natural interest in their history for these trips.

The cemetery at Omaha Beach in Normandy is on the heritage tour as it is not far from Mont-Saint Michel, once under the care of the Edmundites.

“Father Marcel and I go way back,” said Louis Giancola, adding that the late Edmundite Fr. Ray Doherty ’51 also was a good friend who performed his and Mary’s 2005 wedding in the College chapel. The couple became regulars at the chapel for Sunday Mass, and one day, Fr. Marcel invited him after Mass to help organize the 2018 heritage trip, which turned out to be a great experience for all concerned. “I think that’s why he he called me this January and said, ‘Let’s try to do it for 2022,’ and we tweaked it with a little more history in it,” Giancola said.

A personal highlight for Giancola and Fr. Marcel was traveling to the smaller towns in Burgundy and Normandy, “places where we would not have visited if not for the Edmundites, so it was a taste of authentic France,” off of the beaten tourist path, Giancola said.

“People were very friendly,” both wherever they visited and among the travelers, Giancola said, and he particularly appreciated the congenial spirit continually enhanced by the lovable Father Rainville along the way.

“One of the highlights for me on the 2018 trip as well was getting a deeper appreciation for the Edmundites and their whole philosophy for service and social justice,” he said.

A panorama view of Auxerre from the 2018 trip, with St. Etienne at the top.