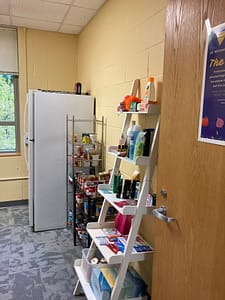 Looking into the food pantry in Alliot Hall last month.

On September 22, the Saint Michael’s College food pantry opened in Alliot 204 for student and employee use. Shelves were stocked with boxes of pasta, crackers, macaroni and cheese, ramen noodles, hygiene products, and more. The refrigerator in the pantry was stocked with fresh fruits and vegetables from the Farm at SMC. Collaborators who contributed to the pantry’s launch include Residence Life, Mobilization of Volunteer Efforts (MOVE), Center for the Environment, Facilities, Center for Student Diversity, Empowerment, and Community (DEC), and more.

Six years ago, Kristyn Achilich ’05, M‘20, director of the Center for the Environment and instructor of education, and Lara Scott, Director of MOVE and associate director of Edmundite Campus Ministry for Community Service, were involved with the organization called Campus Compact, which focused on the national conversation around food insecurity on college campuses. Their work with Campus Compact allowed them to recognize different levels of need on Saint Michael’s College campus.

Scott said that one year ago, through “Ditch the Dumpster,” an annual landfill diversion initiative which collects and donates students’ unwanted items at the end of the year, she and Achilich recognized the first of many mechanisms that would allow Saint Michael’s to open the doors to its own pantry. “We noticed how much food we were collecting, which was amazing. In years past, we have community partners that we donate that food to,” said Scott. This year, the Ditch the Dumpster team collaborated with MOVE to serve off campus partners as well as collect and inventory items for the on-campus pantry.

In 2018, Achilich led students, with a VPAA grant, through summer research that collected data surrounding food insecurity on Saint Michael’s campus, said Scott. With the knowledge of what students on campus needed, Achilich, Scott, Sarah Klionsky of Bergeron Wellness, and Sarah Childs of CDEC began having conversations around how they could use Ditch the Dumpster to address some of those needs.

During this past summer, Patricia Siplon, professor of political science and director of public health and advisor to CAN+, recommended a food pantry pop-up as an interim while they prepared to open the actual food pantry. In 2020, Siplon started pop-up shops with the COVID Action Network (CAN) which served students’ needs during the pandemic. This summer, the idea was to replicate those pop-ups. Four Thursdays, during the summer, a pop-up shop was held in the lobby of Alliot for community members to have direct access to fresh and shelf stable foods, to take whatever food items they may need.

During her time with Campus Compact, Scott found that the term “food insecurity” is defined much more broadly than many would think. “It’s not only a financial component that pertains to students’ lack of financial access to food; it’s a conversation around where individuals are located and how they are physical able to access food,” she said. Achilich adds, “To empirically measure to the best we can a socio-political governed resource, we also look at the cultural access to food as well as the individual, household, or community’s knowledge to use the food.  All of that is then situated in the permeance of the food, in that we look for consistency to access, not just episodic access.”

Scott said that it has to do with students’ access, or lack thereof, to fresh foods or the time available for students to get to the dining hall or grocery store. “There’s not always time for students to access the food that’s available to them on campus,” she said.

Jeff Vincent, assistant dean of students and director of residence life and community standards, had another perspective that he was able to bring to the conversation. Vincent said that he was hearing how students were making housing decisions based on the price of the housing unit and the need to buy groceries or not. “Hearing about one student making a housing decision around the need to buy groceries is one student too many,” he said.

The pantry is able to meet the needs of the campus community one day a week, from Thursdays at noon to Friday at noon every week. Scott said she would like to see the pantry open more often in the future; however, the pantry team recognizes the development that it needs to accomplish to support the initiative at a larger and more consistent scale.

“It’s such an overwhelming but exciting time. We’re collaborating with contingencies across campus currently. Everyone has ideas, so there’s much opportunity for the pantry to grow which is exciting,” said Scott.

The food pantry team is collecting data about the pantry’s use during the fall semester. Team members are working to gather data around how many people are using it during the current hours, what time the pantry has the most foot traffic, how students and employees prefer to engage with the pantry, what food and personal preferences may be, and more. These efforts will be the genesis of evolving the pantry to best meet the needs of campus, consistently, into the future.

“We’re trying to use this semester as a way to see how it’s being used. We’re monitoring what people need or want so that we can expand on the pantry, making it better,” said Scott.

The Food Pantry door from the hallway on Alliot’s second floor.

Scott emphasized that the food pantry is not only a need-based resource. “It’s really important to us that the pantry exists as a ‘use what you need and want’ kind of resource,” she said. “If you just need a snack before class or if you forgot tomatoes for a meal you want to make later, please use the pantry. We hope that this philosophy and mindset continues to evolve the culture of food and community on campus and destigmatizes individuals sharing what they need.”

*If you’re inspired to make a donation of shelf-stable food to the pantry after reading this article, and physically and financially able, please drop food items in one of the five locations listed above or contact Scott or Achilich directly.  lscott@smcvt.edu and kachilich@smcvt.edu

Trees heading from nursery to Natural Area this week

Faculty/staff bike enthusiasts enjoy healthy trips to, from, around campus

To a full house, lecturer Ryan Shea suggests how poetry can help us read the book of nature