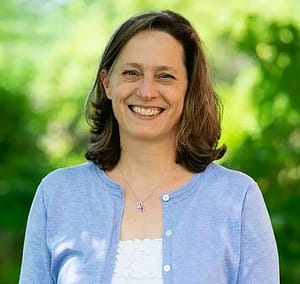 As the Director of Admissions Systems and International Enrollment, Lisa Lagerquist can’t ask for more variety in her job. From sitting behind her desk, working with admission data, to getting lost on safari in a station wagon in Kenya, Lagerquist has seemingly seen it all.

While on campus, Lagerquist said, her schedule remains fairly regular. Working from roughly 8 a.m. to 5 p.m. each day, she typically dedicates the majority of her time to meetings and general admission planning in addition to interacting with students and supporting admission activities. Post-pandemic, Lagerquist also said that her job has evolved to incorporate much more virtual communication with prospective international students via email and Zoom.

When on the road, however, Lagerquist’s role becomes much less predictable.

Marking one of her first in-person recruiting trips since 2019, Lagerquist recently returned from a trip through Southeast Asia where she visited five cities, 24 schools, and connected with an estimated 700 students across 10 days. While on the trip, Lagerquist said, her workdays typically began at around 7:15 a.m. when she boarded a bus with a group of other international counselors from colleges and universities across the United States. From there, the group visited three to four schools each day, uncertain of the circumstances that might await them once they arrived.

“When we get to the school, it could be a fair and we could have tables for setting up all our materials, with students just filtering in,” she said. “Or else, we might have to do a quick presentation where we have only 30 seconds to say who we are and entice students to come talk to us when they’ve never heard of Vermont or Saint Michael’s College – or it could be a combination of those two. You never really know what you’re going to have until you arrive at a school,” she said.

As a small college in a state with very little name-recognition competing against large universities from across the globe, Lagerquist relies heavily on what makes Saint Michael’s unique: its liberal arts education.

Lisa Lagerquist on a side trip to Batu Caves and then shopping in Kuala Lumpur in Malaysia during her recent recruiting trip to southeast Asia, including schools in Vietnam and Thailand.

“A liberal arts education is not something we get in most parts of the world. In many countries, you have to know exactly what you want to study,” Lagerquist said. “Say you apply for biology. Then you study biology and you don’t study much else. And if you change your mind, you start over.”

Beyond the personal benefit that international students receive in attending Saint Michael’s College, the College’s community as a whole also benefits greatly from their presence on campus, Lagerquist said.

“They just bring a lot to our campus community, another perspective of how to view things,” she said. It might be small things “like when you eat dinner” to big things “like government, how education is funded in your country, and how you view civil liberties or women’s rights.”

“The ability to operate in a global world is just so important for all of our students,” Lagerquist said.

Beyond the benefit of working directly with the students themselves, Lagerquist also enjoys getting to know their parents, expanding her own global community.

“I am so appreciative of the parents. When their students come here [to Saint Michael’s], they sometimes host me when I go back to those countries to recruit. Some parents have even helped me at fairs, driven me around a city, and introduced me to schools. Those are also some of the times when I’ve gotten to see things besides work,” Lagerquist said.

Some of Lagerquist’s favorite non-work related excursions hosted by parents have included dinner at the Cambridge Club in the UK and a visit to the Holmenkollbakken Ski Jump in Oslo, Norway. “Those were opportunities for me to do things that were local, which I loved,” Lagerquist said. “But you also get to talk with the parents and learn more about the culture and child raising in other countries. You get some really great stories.”

With many great stories of her own, one of Lagerquist’s favorite recruiting trips of all-time was to Nairobi, Kenya. Besides “adopting” a baby elephant named Sattao from a wildlife preserve in Nairobi (such “adoptions” involve gifts to help protect vulnerable wildlife and habitats), and she and a friend also got lost on safari in a station wagon.

In her 2018 recruiting trip to Nairobi, Kenya, Lagerquist “adopted” a baby elephant named Sattao from the safari orphanage. Sattao is now teenaged and will soon be released back into the wild.

Just outside the city, the pair visited a nature preserve where visitors are able to drive their cars in and see the wildlife. While traversing the pot-hole-stricken road without a good map and a severe shortage of road signs, they stumbled upon a truck full of rangers and rifles.

“We pulled up next to them, and my friend is like, ‘We’re looking for lions, have a seat,” Lagerquist said, still laughing at her friend’s lack of a social filter.

The rangers informed them that there was lioness and her recent kill not too far ahead and that they would send two of their men with them to guide them to the exact spot. “So these two guys in full military gear, wearing their camouflage and with their rifles, climb into the back of the station wagon. And now we’re driving around with these two Kenyan Safari wildlife rangers in the car, and I’m like, ‘This is not something I would do in Vermont!’”

After seeing the lioness, Lagerquist and her friend then had to drop the rangers back off at their camp, but in the process, took a wrong turn. “It’s getting dark and we don’t know where we are. We’re on this road with giant holes, in her old station wagon, and then we come up on this rhino sitting in the middle of our path. And I just remember having this moment of ‘I don’t know if I’m ever getting out of here,” Lagerquist said.

Lisa with park rangers in Nairobi on a pre-pandemic trip.

Fortunately, against the odds, they worked their way around and found their way out of the park. “I’m just glad I wasn’t driving!” Laqerquist said, laughing.  This said, for every story of adventure that Lagerquist has, there seems to be one on a bus or in a hotel room.

“You know, there’s a lot of packing and unpacking involved on trips like these,” Lagerquist said. “When I put up my Facebook posts, which are always fun pictures of where I am, I usually try to post a picture of my laundry as well, just in case you think this job is all that,” she said, remembering the countless times she has washed her laundry in the hotel bathroom out of necessity.

“If you’re 25 and you want to see the world, you’ll certainly see the world through this job. But, I also tell people, I was in Bangkok, Hanoi, Jakarta, and Kuala Lumpur, and I mostly saw hotels, buses, and schools. You can see a lot out of a bus window when you’re driving through, but it’s not like you’re always getting to fully experience these places,” Lagerquist said.

On a school visit to the UK.

Trees heading from nursery to Natural Area this week