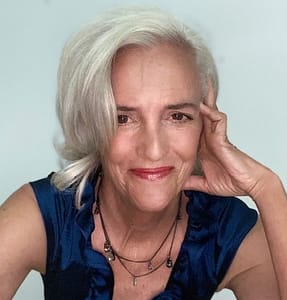 Cynde Strand is now teaching a Saint Michael’s journalism class. The large photo behind the headline shows Strand seated at right in 2019 at the American Cemetery above Omaha Beach on the coast of Normandy, France, with CNN correspondent Christiane Amanpour for Strand’s last CNN assignment for the 75th anniversary of D-Day.

Teaching the Saint Michael’s College course “Female Journalists: Headlines, Deadlines and Front Lines” this semester is another “calculated risk” for Cynde Strand, who boldly built an extended award-winning career around such risks as a CNN war zone camerawoman before moving to Vermont to “reclaim my life” and try academia.

So far, so good, say Strand and her enthusiastic students. This new adventure grew out of her connection with a similarly well-credentialed friend, Tess Stimson of the St. Mike’s adjunct faculty in Media Studies, Journalism and Digital Arts (MJD). Stimson is a former television news producer who ended up in Vermont writing and teaching at the College. Stimson is the author of 14 psychological thrillers and 2 non-fiction books.

“Tess and I worked together in Somalia and knocking around war zones, and we reconnected after many years,” said Strand, who was one of five camerawomen featured in the film No Ordinary Life that aired in September on CNN.

“She introduced me to Jerry Swope, MJD department chair, and we had a few conversations, and he gave me this amazing opportunity,” Strand said. “It’s just something I always wanted to do, and in this life, you figure it out if you really want to do something. It has been fabulous to put together a syllabus on something that is very important to me – women in journalism.”

Strand, a lifetime outdoor adventure enthusiast, is also falling in love with Vermont and its natural beauty. While life in Green Mountains is rich for her, it is very different from her most recent high-pressure, high-reward duties with CNN from Seoul to London to Atlanta.

Cynde Strand hiking in Norway not long ago.

“I left CNN in 2019 and I just wanted to do other things,” she said — I realized, I’m in my 60s and I want to travel the world because I’m always going to be a traveler. I want to climb mountains and ride bikes and hike in places while I can” while pursuing storytelling and photography in different contexts.

“I was just untethered after my final job at CNN as executive director of international news gathering,” she said. “This was the second time in my life I just took the decision I needed to reclaim my life, much as when I was getting close to 40, which I talk about in the film. As a camerawoman my life was always someone else’s life, and back then, I was fortunate to have a child and realized I wanted to have a different life.” Another transitional career juncture, 2019 similarly felt to her like a chance to make a needed change.

But before long, CNN asked her to come back for a project in Asia. When it looked like Putin was going to invade Ukraine, she found herself managing Ukraine coverage overnight from Seoul, Korea.

“When Atlanta went to sleep they would hand leadership of the story over to me in Asia. When my day ended, I would hand it over to London – ‘follow the sun,’ it’s called. I love Asia and it really suited me,” said Strand, who, as a young woman decades ago, quit CNN for a second time and moved to China to learn Chinese. CNN opened a bureau in China right when her year of study ended and hired her as the cameraperson.  Strand found herself at Tiananmen Square to capture that historical moment on video as the network’s Beijing videographer

A hit with students

Students in Strand’s class appreciate the professionalism and adventuresome spirit of their new mentor. Sophie Burt ’26, a media studies, journalism and digital arts major from Madison, CT, said the class inspires her “to push any boundaries that may be holding me back.”

“She creates such a comforting environment that allows me to be my best self,” Burt said. “It’s so inspiring to see all these women we are studying breaking boundaries and smashing stereotypes. The class encourages me to explore places I never thought I could go.”

Strand shoots footage from a helicopter over the Hindu Kush mountains in Pakistan back in the day.

Strand is similarly enthusiastic about her “great mix of students” from first years through seniors, and students of different majors. “It’s just great to be around smart students,” said Strand of a group that includes four male students interested in learning about women journalism pioneers.

Preparing for the course has brought Strand other bonuses too. “I’ve (been) able to read more in depth about women who inspired me and ones I didn’t know about,” she said. “I’m digging deep, finding really interesting videos and some controversial moments to try to teach about the women who went before me – maybe inspire students to realize that even if they feel a little different, there’s still a seat at the table today and that voice is welcome and needed.” With no fully complete textbook on her topic, Strand is assigning books this semester by great women journalists who inspired her, or talking in class about the new menace female journalists face, “armies of trolls” who go after female journalists in particular.

Of the course content, she said, “This story is about how women broke down barriers, fought to get equal footing and equal pay, to get their voice heard and published… and developed their own kind of storytelling.” For Strand, however, it goes deeper than just the stories of female journalists. “It can be applied to anyone who feels marginalized or without a seat at the table for some reason and this can inspire people – don’t let barriers and barricades stop you. And besides, who doesn’t want to hear about incredible people?”

In one early class this semester, Strand had friend and fellow camerawoman Mary Rogers join the class from Cairo, Egypt via Zoom. The award-winning veteran, also featured in the film No Ordinary Life, is still working as a CNN camerawoman, and is still assigned to all the big stories. “There’s also been a lot of attention in our class to female reporters working in Ukraine,” she said. The students learned how in the first and second world wars, women were banned from front lines and often had to sneak or convince a lower official to let them have access. Journalist Martha Gellhorn had to stowaway in a hospital ship to get access to the beaches in Normandy on D-Day. She was one of the only journalists there but was later arrested and stripped of her credentials.

A circuitous path to journalism

Strand also talks about privilege and connections smoothing a path for some of the early female reporters, and what you do if you have neither. She teaches the students some of the early reporters and photographers were just plain gutsy and that made up for all else. Strand’s own story offers a case in point. “I grew up all over the place since my family moved around a lot, which probably ingrained in me the ability to go to a new place and quickly establish,” she said. Hers was a middle-class family, her father in the clothing business.

Strand and a baby rhino in South Africa.

“What we didn’t’ have in material riches, though, we had riches in other ways – books and news and appreciation for the outdoors,” said Strand. She lived in Utah, Georgia, Texas and then Colorado in early life, eventually studying chemical engineering at the University of Colorado and then the University of Texas before realizing that “I really wanted to be a journalist and photographer and travel around the world.”

Videography seemed a good path since “I have spelling issues,” Strand said, and CNN, then relatively new, was hiring folks right out of college as video journalists. She worked her way up until, impatient, she opted to take one of those calculated risks and move to a war zone hoping for work as a freelancer. In Beirut she worked as a tape editor, learned camera work, practiced, returned to the U.S. for a bit and became a “super-fast tape editor,” quit CNN again, moved to China, studied Chinese and “the stars aligned – I knew CNN was trying to open a Beijing bureau,” and they gave her a full-time camera position there.

At CNN headquarters in Atlanta.

An impressive career from there took her over some decades to such hot spots as the Bosnian War, Somalia, Rwanda, and Iraq. She filmed Nelson Mandela voting for the first time in South Africa – a career highlight. She saw how women often brought a distinctive and valuable human element to reports in such challenging violent situations — something she sees in females reporting from Ukraine today. For Strand, it is the people’s stories that matter most. Strand said a little fear in such assignments is good, so she does not call herself fearless. After having a child, she sought less risky work as a supervising editor back at CNN headquarters in Atlanta. “It was great to mentor young people and I got to thinking of mentoring in an academic environment,” she said. “I love working with younger people who are starting to think of the kind of career they want.”

Of Vermont, she says, “It really is an incredible place” with so many opportunities and such outdoor beauty – “Better than Boulder” she jokes with her grown outdoorsman son in Colorado — and she would like to teach her course again. To her, liberal arts prepares students for journalism jobs well, almost regardless of major.

“That’s our tribe as journalists – we want to go to these places and experience ‘the other’ and tell stories,” Strand said – be that with a background from majors in English, journalism, history, or global affairs. “Even in chemical engineering, I learned to solve problems quickly and was good with technical aspects of equipment, while history or English helps you with context on a story and the important ability to express yourself and write well.”