Time with students, reception, lunch and tour sponsored by Vermont Council on World Affairs, hosted by Center for Global Engagement 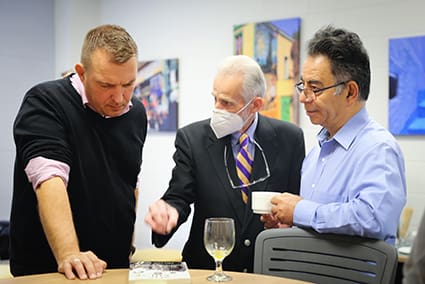 Veteran Saint Michael’s Applied Linguistics and English Language program leaders Richard Gamache, center, and Mahmoud Arani, right, look with a visiting Hungarian parliamentarian at historical items from when Hungarian Freedom Fighters took English at Saint Michael’s in the 1950s, during a reception for the visitors in the International Student Lounge in St. Edmund’s Hall. (photo by Isabella Paredes Mendoza ’24)

Five members of Hungary’s Parliament visited Saint Michael’s College Wednesday, learning and teaching about the essentials and challenges of democracy.

The group’s campus host Jeffrey Ayres, director of the College’s Center for Global Engagement, said he and his students and colleagues appreciated what felt for Americans like a timely extended dialogue with “a group of elected parliamentarians fighting for more openness and democratic freedoms in a country increasingly considered autocratic, populist and authoritarian.”

Ayres said he found the visitors “really interesting and fun — an impressive group of people in a challenging situation over there in Hungary” – namely, all are part of the opposition coalition to Hungarian Prime Minister Viktor Orban’s nationalistic right-wing super-majority that has been making itself known in U.S. news of recent months.

Sponsoring the five-delegate group’s stay in Vermont was the Vermont Council on World Affairs (VCWA) as part of its Open World Program. They spent the previous two days in Montpelier at the Vermont Statehouse meeting officials. Before that, they were in Washington, DC, to learn about the U.S. federal government.

In political science Professor Ayres’ introductory International Relations class Wednesday morning, four of the delegation’s five Hungarian lawmakers also had with them a top diplomat for the U.S. Embassy in Budapest who also is Hungarian. Ayres said two of the group members, Anna Orosz and David Bedo, belong to a younger party called Momentum which was interesting to hear about. The delegates together gave a short 20-minute view of recent politics and their challenges. For instance, they noted how the European Union had issued a statement saying that Hungary is not a functioning democracy any more.

“It was great to hear from this group of people committed to a pluralistic, liberal democratic society,” said Ayres, “They are struggling in a context where propaganda and Orban’s super majority collation makes it difficult to get opposing viewpoints through.”

The class discussion revealed some similarities to current U.S. politics such as a rural-urban split on prevailing ideologies, with urbane Budapest residents being more highly educated and supportive of democracy and diversity of views and minority rights. He said students asked great question for nearly 40 minutes.

“They asked a lot about rule of law and the constitution and the challenge of being in the opposition in Hungary, and also what it’s like to be on border of Ukraine right now, and how does the Russian invasion affect life and politics in Hungary,” Ayres said.

Ayres said he could tell the group enjoyed what was their only visit to an educational institution and class during their U.S. stay. After the class was a well-attended reception in the International Student Lounge with a good number of faculty and staff turning out, “so people had a chance to talk individually with these representatives.”

Longtime Applied Linguistics Professor Richard Gamache came to share historical items from when Saint Michael’s hosted a group of refugee Hungarian Freedom Fighters in 1956 during the early years of the College’s pioneering English language program of that era. After the reception, Dean Gretchen Galbraith, Professor Mike Bosia of political science and some others joined the visitors for lunch in Alliot (see bottom photo at end of story).

“I gave them a campus tour after lunch and they were blown away by the beauty of chapel,” Ayres said.

The Vermont Council on World Affairs states that its Open World program “has been forging lasting positive relationships between emerging and established leaders in the former Soviet Union and their American counterparts since 1999. Program participants have a range of diverse backgrounds, and they come to the U.S. with the purpose of gaining a better understanding of American democracy and the rule of law in the U.S. While here, they are introduced to best practices in critical areas like sustaining NGOs, tackling corruption, and promoting an independent judiciary, and so much more.”

From top down, Tompos, Balassa and Orosz.

Márton Tompos: Mr. Tompos was elected to the National Assembly in May 2022 as a member of the opposition party Momentum, one of the newest parties in the Assembly. He was a member of the Momentum Movement and later became one of the founder of its transformation into a political party in 2017. He was recently elected as Deputy Whip. He previously was a Vlog producer and editor.

Péter Balassa: Mr. Balassa was elected to the National Assembly in May 22 as a member of the opposition party Jobbik faction. He currently serves on the Committee on European Affairs as the Vice Chairman. He previously was a professional soccer player, spending three seasons with Szombathely Haladas and was a Member of the Sarvar City Council where he focused on social and economic affairs.

Anna Orosz: Ms. Orosz was elected to the National Assembly in May 2022 as a member of the opposition party Momentum, of which she served as the interim leader of in 2021. Ms. Orosz previously served as the Deputy Mayor for City Development and Public Education. In 2017 she was ranked by Forbes as the 8th most influential Hungarian woman in public life. She also previously worked as an analyst and communications associate at Political Capital.

David Bedo: Mr. Bedo was elected to the National Assembly in May 2022 as a member of the opposition party Momentum. He serves on the Committee for European affairs, and is currently the Deputy Faction Leader for Momentum’s parliamentary group. Previously he served as a Member of the Local Council of the Budapest XI. District and as the Network Director of the Momentum Party.

Dr. Balazs Barkoczi: Mr. Barkoczi was elected to the National Assembly in May of 2022 and is a member of the opposition party Democratic Coalition. He serves on the Committee on European Affairs and the Committee on Agriculture. Before becoming a Member of Parliament he served as the Spokesperson for the Democratic Coalition and a High School Teacher of Hungarian Language and Literature.

The delegation was accompanied by Mate Hegedus, Senior Political Specialist at the U.S Embassy in Budapest since 2012.

The College Archivist Liz Scott of the Durick library staff shared an interesting historical account of a previous long-ago group of Hungarian visitors Saint Michael’s in the 1950s as mentioned. This comes from an issue of the student paper The Michaelman from November 1958 in an editorial statement supporting freedom in Hungary after the Soviet 1956 invasion:

Mementoes from the 1950s stay by Hungarian Freedom Fighters at Saint Michael’s College to learn English used to be displayed as above in the old Applied Linguistics offices.

“St. Michael’s College has known the Hungarians, and welcomed them in a truly American fashion. On January 17, 1957, a large group of Michaelmen carrying placards waited at Essex Junction in the subzero weather to meet the train carrying the Hungarian Freedom Fighters to St. Michael’s. This was a memorable event as cheers and handclasps quickly dispelled all language barriers. The Hungarians had begun the transition in their newly-born freedom.

Of the 32,000 refugees in the U.S., 12,000 were students and St. Michael’s accepted 101 of them through the supervision of the Institute of International Education which is financed by grants from Ford and Rockefeller Foundations. The English Program was exactly what the Hungarians needed and St. Michael’s was asked to accept as many as possible.

Much had to be accomplished in order’ to provide them with necessary accommodations. They were housed in St. John’s Hall and the facilities of Aquinas Hall were enlarged to receive the added number for the English Program. Each Hungarian was assigned an American student as an advisor for the various problems which he would encounter. One of the largest projects was that of clothing. The new Michaelmen were ill attired for Vermont winters so Michaelmen took it upon themselves to round-up clothing with a door to door campaign of the surrounding neighborhood.

The situation was enhanced when students invaded their closets for the much-needed clothing. Each Hungarian was then presented with a full suit of clothing. Donations were sought to furnish the young Freedom Fighters with a small semi-monthly allotment to be used for entertainment. They received this generosity with open astonishment. The gifts which they had received in Hungary had always come with strings attached. “Why are they so helpful, when they cannot hope to receive anything in return,” they asked themselves.

During the 15 weeks of their stay, the group exhibited the highest achievements, scholastically, of any other students previously admitted into the program. In the individual lives of the Hungarians, a meal at a private home, a trip to the state capital, a firsthand view of a Colchester Town meeting, and an occasional coke served as a break from the studies.

Approximately two-thirds of the Hungarians received scholarships to various universities and colleges including Michigan State, Fordham, Columbia, Princeton, etc. Reports confirm that they are doing very well and some are outstanding students in their fields. They have not forgotten their first American home, nor has St. Michael’s forgotten the men who cracked the Iron Curtain.”

The group having lunch in Alliot with the Hungarian visitors included Dean Gretchen Galbraith, second from left, Political Science Professor Mike Bosia (blue tie next to her), and Jeffrey Ayres (over Bosia’s left shoulder).