A handful of dedicated students stays with it to make the difference for longstanding operation, located on Dion second floor 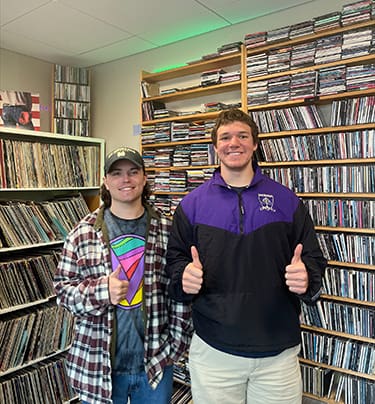 Robert Dwyer ’23, left, with Connor Torpey ’23, in the WWPV record and CD collection room in behind the Dion studio.

WWPV is a radio station owned by Saint Michael’s College and licensed to serve the community of Colchester, VT. The station’s control room exists on the second floor of Dion Family and Student Center. Located right next to the floor’s popular ping-pong table, the room has a glass wall separating it from the floor in Dion, giving students the opportunity to watch the station come to life.

During his first year at Saint Michael’s, Connor Torpey ‘23, an art and design major from Bridgewater, NJ, says he was sitting second floor of Dion, doing his homework, when suddenly he found himself laughing out loud at the improv comedy show that was being broadcast live from the WWPV station at the time, just to his left. The host was Robert Dwyer ‘23, a political science major and data science minor from Brookline, NH.

Torpey said that his father, Saint Michael’s alumnus Kevin Torpey ‘86, was an active member of WWPV during his time as a student and often shares his radio show stories, so when Connor found himself interested in Dwyer’s show, he immediately thought back to his father’s anecdotes and knew he had to give the station a try.

Connor Torpey said his initial appreciation for Dwyer’s show led to the two becoming friends, and Dwyer helped him get involved with the station. Torpey said anyone can get involved and host a radio show as he did even without becoming a formal member of the WWPV campus club. The final three station call letters stand for “Winooski Park, Vermont.” The original campus station that started on North Campus many decades ago was WSSE for “Society of Saint Edmund.” The studio was in St. Edmund’s Hall until the building of Dion. Through the years many outside community member or faculty and staff have had shows alongside students, reflecting varied interests in music or talk formats.

Soon after Torpey gained interest in the station, however, College officials made the decision to send students home for the rest of the spring 2020 semester due to COVID-19, causing the radio station to go silent. “We had no one on the air for the rest of the semester,” said Dwyer. Even after students returned in the fall of 2020 with the hope of getting things back to normal, some restrictions still in place prohibited the station from running regularly and successfully, Torpey said.

Dwyer said the entire WWPV executive board graduated in 2021, leaving only Torpey, another club member, and himself to resurrect the club and get it up and running, despite the three having scant knowledge at that time of how the station works. Yet, with determination and teamwork, the group succeeded in getting the station running again for the 2021-2022 academic year, with 20 shows planned to air at the beginning of that year.

After a successful year of getting the station back into the swing of things, Dwyer and Torpey said they are looking forward to getting new radio shows out there this year.

The WWPV club functions a bit differently from other clubs because it only meets once at the beginning of the year. This meeting is to teach radio show hosts about the station’s equipment and to teach them how to use it. Throughout the rest of the year, hosts fully run their own shows weekly for each at a designated show time, said Dwyer.

Radio hosts are welcome to contact a member of the executive board if they need assistance with the equipment throughout the year, said Dwyer. “The independence is really there though,” he said. “Once you learn the equipment, you get free rein to do what you’d like on the show, within FCC guidelines of course.” As another resource, the longstanding staff adviser for the WWPV club, John Connors of the College’s Information Technology office, makes himself available if needed.

The WWPV Club creative director, Jenna Farber ‘24, a psychology major with a sociology and gender studies double minor from Coventry, RI, said that her biggest goal for the station is to recruit new show hosts and members of the club this year.

Jenna Farber ’24, center, and the Fruitcakes crew in a recent WWPV poster.

Farber said she also hopes to market the station to the school more. She attributes students’ lack of knowledge about the station to the minimal use of radios nowadays. She hopes that the club soon will be able to have the station played in more traffic-heavy areas of campus such as in Alliot and the Campus Store.

Farber runs a radio show with two of her friends every Sunday at 10 a.m. titled “Fruitcakes.” The group chooses a music theme for each week. One recent week, for instance, the group decided to play only covers of songs as their musical theme. The show consisted of songs such as “Wonderwall” by Ryan Adams, “Since U Been Gone” by A Day to Remember, and more.

The group also will occasionally host “Fruitcakes” in a talk show format, where they will engage in debates, tell personal stories, share childhood memories, play “would you rather,” and more.

Farber is looking to have more students join the WWPV club and/or host a radio show this year. “Any student should consider trying out a radio show. If you’re into music, talk shows, podcasts, or anything along those lines you’d definitely love it,” she said, adding that the radio station is great because it allows students to engage with any topic, so there’s something for everyone.

To learn more about hosting a radio show, or to get involved, contact rdwyer2@mail.smcvt.edu. To check out the weekly radio show schedule, visit https://spinitron.com/WWPV/calendar.