For busy student-athletes, studying abroad can often feel like an impossible feat. With practices, strength training, and miscellaneous team events occurring constantly throughout the year, studying abroad at the price of the sport you love may just not seem worth it.

For nearly 20 student athletes in the 2021-2022 academic year, however, studying abroad proved to be a feasible and highly rewarding experience. While studying abroad requires unique solutions for each student athlete, seniors Lucas Persechino, Grace Erholtz, and Peyton Edwards found opportunity in various facets of the many summer study abroad programs offered by Saint Michael’s College. 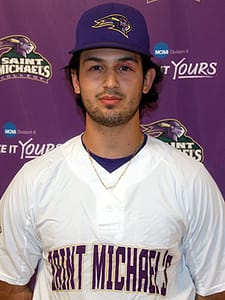 A member of the baseball team at Saint Michael’s, Persechino studied abroad in Buenos Aires, Argentina, this summer where he worked for Haciendo Camino, a non-profit organization which strives to improve the quality of life for vulnerable families in Argentina. As a business administration major with a psychology minor, his daily responsibilities mainly included taking photos for the organization’s marketing team.

Beyond professional development, Persechino also found the opportunity to expand his Spanish-language comprehension through exposure. “Spanish was difficult at first because they have a different dialect that took some getting used to,” Persechino said. “I was never fully able to understand them, but I did expand my vocabulary astronomically.”

While in Argentina, Persechino also gained new perspectives for his life at home. “I spent two weeks in Santiago del Estero, where their [Haciendo Camino’s] operations are based. It was quite the experience seeing how they lived and it really made me thankful for the life I live,” he said.

Although athletes do not compete for Saint Michael’s during the summer, the time between the spring and fall semesters are essential for strength training and fine-tuning skills that are more difficult to work on during the season. As many student athletes do, Persechino worried that his time abroad would negatively affect his season, especially since Argentina, the home of Lionel Messi and a thriving soccer culture, does not have baseball.

“I was worried that being away from baseball for eight weeks would impact my play; however, I hit the ground running when I returned to the states and did improve over the summer,” he said.

Persechino added that he was fortunate to find success in his summer training, but he recommends that other athletes plan their study abroad experiences around the necessary preparation for their seasons more effectively than he did. “I was honestly a little stressed about getting back into the groove for baseball. Everything worked out for me, but it’s definitely an experience that shouldn’t be ruined by stressing about responsibilities back home.”

Persechino emphasized that any student athletes considering studying abroad should take full advantage of the opportunity. “All-in-all, it’s doable and an amazing opportunity,” he said.

“But if you want to practice while abroad, make sure the sport is popular where you’re going. Shouldn’t be an issue for soccer players,” he joked.

Grace Erholtz, a history and secondary education major with a literature minor and an athlete for both the Cross Country and Nordic Ski teams, spent two weeks abroad in England this summer studying and watching Shakespeare plays.

While Erholtz knew that studying abroad would be nearly impossible during the regular academic year, especially as a two-sport athlete, the opportunity to travel while receiving academic credit was just too difficult to ignore. As a solution, Erholtz took advantage of one of the faculty-led academic study trips offered by Saint Michael’s.

During the spring of 2020, her first year, Erholtz took a two-credit preparatory course called “Shakespeare in Film” with plans to complete two additional credits with the class while abroad that summer, as is standard for the faculty-lead abroad programs. Due to the onset of the COVID-19 pandemic, however, the trip was postponed until the summer of 2022.

While abroad, Erholtz had the opportunity to relish the countless academic, historical, and cultural joys of England.

Academically, the course focused on six of Shakespeare’s works, which the students read, analyzed, and then watched live. This said, Erholtz also had considerable time to explore the country beyond academics as well.

“During the two weeks I was able to spend in England, I was also able to see and experience way more of the country and culture than I thought would be possible,” Erholtz said.

“When we weren’t in class or at a play, we were almost constantly traveling around, taking in everything we could in the time that we were there. Being a lover of history, I was totally in my happy place on this trip because we were able to visit a score of incredible places such as Christ Church College at Oxford University, the Ashmolean Museum in Oxford, and the ruins of the Reading Abbey.”

As for athletic preparation, Erholtz said that her time abroad might even have been beneficial to her season, rather than detrimental.

“Of course I wasn’t able to bring my roller skis over and train specifically for skiing in that way; however, I did have access to the abbey’s grounds to go for runs outside, as well as their gym facilities that included several treadmills and machines for lifting,” she said. “I don’t think going on this trip negatively impacted my season in any way, and if anything, it helped me to cross train for that two week span before launching into a full summer of very ski-specific training.”

Similar to Persechino, Erholtz recommends that anyone interested in studying abroad take full advantage of the opportunity.

“You don’t have to go on the traditional semester-long study abroad program in order to have the experience of studying abroad, although you certainly can, as many of my teammates have gone on to successfully complete semester-long programs. There are plenty of amazing summer and winter break programs offered in tons of cool places as well.”

Captain of the women’s lacrosse team, Peyton Edwards, took advantage of the Saint Michael’s College study abroad experience through a street photography class in Florence, Italy, this summer. As a media studies, journalism, and digital arts major with an environmental studies minor, Edwards had already taken a few photography classes before studying abroad, which helped her to have the necessary knowledge for the class.

Throughout the street photography course, Edwards’ professor took students around the streets of Florence, teaching them how to take effective photos of people or objects. As a highlight of the course, they even went to Italian fashion week where they took photos of the models.

Beyond the academic and professional benefits of her study abroad experience, Edwards also was able to explore much of the culture and food that Italy has to offer.

“I mainly chose my [study abroad] destination because of the program that it offered, but I have also always wanted to try the food specifically in Italy,” Edwards said. “During the weekends we would sometimes go on trips with the school to various locations to explore the sights of Italy.”

Beyond planning academically and athletically, Edwards also recommends speaking with as many people as possible. In her experience, she spoke with many people who studied abroad, even some who studied specifically in Florence, to gain a better understanding of what to expect.

“If you are thinking of going abroad, the best place to start is just talking to people,” Edwards said. “Starting in the study abroad office, Director Peggy Imai can be so helpful with beginning your search and connecting with people.”