To a full house, lecturer Ryan Shea suggests how poetry can help us read the book of nature

Visiting scholar Ryan Shea gave a Friday afternoon lecture on September 23 titled “Orpheus, Metaphor, and the Transformation of Vision: How Poetry Might Teach Us to Read the Book of Nature.” The talk took place in the Farrell Room on the third floor of St. Edmund’s Hall to a rapt audience of students and faculty alike. People gathered in the Farrell Room early, eager to chatter amongst themselves, and soon the room was full. 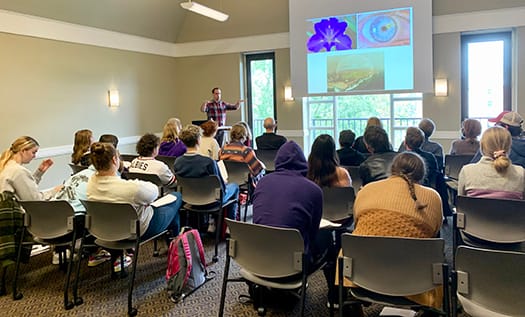 Ryan Shea holds the attention of a full house in the Farrell Room on September 23. (photo by Kaylee Sayers)

Professor Christina Root of the English Department and co-chair of the Humanities Center, organized the event. She introduced Shea before the lecture as “a philosopher both in disposition and by training,” and praised his warm character.

Shea began his lecture with the introduction of the figure of Orpheus, a character in Greek mythology whose lyre could tame animals and whose story, according to Shea, can provide a lens through which to approach the challenge of discovering meaning in nature.

Shea shared eight poems with the audience. The first is was “Blue Iris” by Mary Oliver, followed by “Tomorrow, and Tomorrow, and Tomorrow” from William Shakespeare’s Macbeth, “Language is Fossil Poetry” by Ernest Weekly, “The Holy Longing” by Johann Wolfgang von Goethe, “The Wild Iris” by Louise Glück, “It was a hard thing to undo this knot” by Gerard Manly Hopkins, “Sonnets to Orpheus. V” by Rainer Maria Rilke, and finally Mary Oliver bookended the list with “Praying.”

Shea was quick to posit that “if we are going to be reading the Book of Nature, that means it must be meaningful.” In order to explore where meaning resides, he proceeded to show the audience a series of images that the eye interprets as different depending on the person. One slide was of a drawing that looks like a duck or a rabbit depending on how you look at it. Another was a photo of a cloud in the shape of a dolphin. These dual images suggest the degree to which the mind is involved in acts of perception.

Similarly, according to Shea, metaphor is not just a fun tool that poets use, but an aspect of thinking that we use every day in order to make sense of what we see. “Language is fundamentally metaphorical,” Shea said, “But do we create the meaning and project it out, or do we find the meaning out there?”

He argued analogously that “you can read the same book at five, 15, and 50 years old… and the text becomes radically different.” He went further to say the first transformation for finding meaning that needs to happen is somewhat radical…Like Orpheus, we need to undertake a kind of journey to the underworld in ourselves that will help us discover if it is possible to go beyond simply constructing the meaning that we reflect back to ourselves…and instead determine if there could be implicit meaning, and the job of the human could be to bring it into intelligibility.

Shea’s last remarks, especially, sparked a lively debate after his talk with members of the audience who both shared their reservations about his arguments and their own instances of similar ideas and claims.