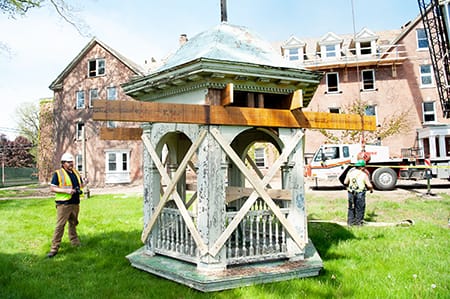 Joel Ribout, left, looks over the Cupola in May 2021 after contractors removed it from atop the soon to be razed Founders Hall in the background. (file photos by Jerry Swope)

In preparation for the expected mid-October return to campus of the restored Founders Hall cupola, contractors will start work later this week on an outdoor gathering space anchored by the cupola that “will bring community and history together,” Facilities Director Joel Ribout said.

“I would say by Friday we’ll see some action,” Ribout said of the space on the central campus green. To pinpoint the location for anybody familiar with campus, he said, “Imagine the intersection of lines running between the library and chapel and between Joyce and St. Edmunds Hall.”

“They’ll be putting up fences this week, but the heavy work starts next week, including taking down the Dupont Cross and running power to the site underground from St. Edmund’s Hall,” Ribout said. “We are going to save the cross and keep it for potential future use.”

Very Rev. David Cray, superior general of the College’s founding religious order, the Society of St. Edmund, initially suggested the more central location for the cupola project with an understanding of the need it might create to move the Dupont Cross. “We will put it in a properly dignified location – we just haven’t figured out what that is,” Cray said of the cross, which is made of steel beams from the original Saint Michael’s Playhouse that burned down near the site decades ago.

Tentative earlier plans had called for the cupola to return directly below its original location on the footprint of Founders Hall, which contractors deconstructed in 2021 once architects definitively determined it was not restorable.

Fr. Cray said one day as he was walking by that site, it dawned on him how susceptible to potential vandalism the cupola might be if exposed so close to Route 15 and so far from “24/7 occupied buildings.” Why not instead place it where people might regularly encounter the restored historic structure during a normal day, he thought. He suggested the central green location to President Sterritt and Finance VP Rob Robinson, who liked the idea, as did Ribout when he heard about it. “It seemed right to place such an important piece of College history at a site more centralized so it would not have to be a destination to go see it – you could just see it when you were walking around campus,” Ribout said.

The facilities director then set to work with the highly regarded Vermont stone artist Thea Alvin on the details of the present cupola plans. Several years ago, Alvin created the stone sculptures that grace the College’s Teaching Gardens near McCarthy Arts Center. She also put Ribout in touch with Watershed Construction of Berlin, VT, which handled the removal and restoration of the cupola.

Ribout said he has visited the restoration site in Berlin several times, as the expert restorers replaced rotted wood, though he guesses well more than 75 percent of the original wood remains. Watershed’s artisans placed a new copper roof on it, true to the original design when the cupola went atop Founders Hall in 1914 at a cost of $26, according to records. They also painted it its original color – white — though it had been mostly beige when removed in 2021.

Ribout described the site design for the new location: “The cupola will sit in the middle of a circle where we are going to have hard seating such as benches as well as bermed-up grass so people can sit on the grass to work or whatever,” he said. “We anticipate the space being used for small groups to gather, or maybe for the occasional outdoor class.”

This aerial view in a file photo roughly shows the location where the cupola will be placed upon its return, a bit to the foreground of the Dupont Cross at center that will be relocated. Durick Library is in the background.

The plan also calls for the site to have power, with convenience outlets, and it will be in range of campus Wi-Fi. The site also will include some lighting and historical signage explaining some of the cupola and Founders history, and a walkway leading to the site. “The intent will be for it to be like walking into almost a little amphitheater with the elevated grass berms surrounding it,” Ribout said. “We don’t anticipate a disruption for pedestrians while this work is being done,” he added, “other than the occasional construction vehicles coming and going.”

Don Weston Excavating Inc. of Williston, which the College has used on several previous projects, “will do everything from the site prep to building walls and the grass berms,” Ribout said. The target is for Watershed then to bring the cupola back to campus by late October, and once a crane places the two-ton edifice on the pre-prepared site, Weston will return to complete walkways, pavers, grass seeding and running electrical fibers.

The site will have dual function as a gathering space and a historical remembrance site, Ribout said. He is working with the College Archivist Liz Scott and Marketing/Communications Director Alex Bertoni on the main sign to place at the entry to the space, telling the history of Founders and the cupola.

“In general during this work, people will be able to walk around the site and across central campus still after we just put fencing up around the perimeter,” Ribout said.

The cupola left campus in late May of 2021 after its removal from atop Founders to head for restoration at Watershed. “They’ve been plugging away since, and we are targeting Tuesday, October 18 for it to arrive back on campus,” Ribout said. Once it is back, contractors will reattach to the restored structure the original wrought iron cross that has sat atop the cupola for so many decades.

Ribout described the cupola itself as a hexagon (six-sided), 11 feet across the base and 14 feet high, with the cross on top adding to that height.

Stay tuned for additional information on the project, updates on the progress, and ways you can be a part of Saint Michael’s history.

This image shows an old photo of Founders Hall from the 1960s overlaid upon and accurately aligned with a more recent view of the building before it was taken down.

Removing the cupola from atop Founders Hall in May 2021. (photo Jerry Swope)