In June, Choeden Lama assumed her role as the new assistant director of the Center for Multicultural Affairs (CMAS) at Saint Michael’s College. 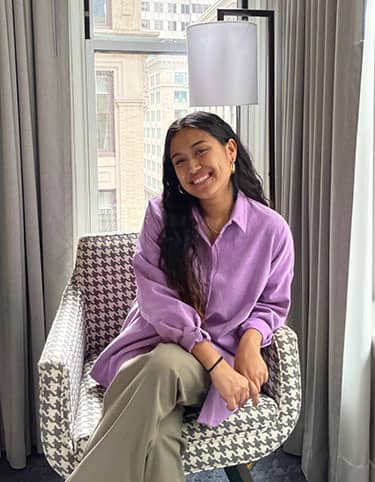 The CMAS campus office on the second floor of Alliot Hall provides a welcoming and inclusive environment primarily for BIPOC, first generation, and international students at the College, offering countless services and programs throughout the academic year. For this reason, Lama will assist in many facets of the Center including holistic student advising, event programming, training student-employees, advising student clubs and organizations, and supporting the Director of CMAS, Sarah Childs.

Lama graduated in 2020 from the University of Vermont (UVM) where she received her B.S. in psychological sciences and was involved extensively in the Mosaic Center for Students of Color, essentially the UVM equivalent of CMAS. Through the Mosaic Center, Lama was a student leader of the Asian Student Union and Jazbaa South Asian Dance Group, in addition to a member of the Black Student Union and Nepali Student Association, among others.

In alignment with her experience at the Mosaic Center, during her senior year at UVM, Lama interned at Connecting Cultures, a clinic located in Burlington that primarily offers therapy and counseling services to the refugee population. The clinic also has a team of social workers, physical therapists, medical providers, and health care providers available, Lama said.

During her time at Connecting Cultures, Lama also had the opportunity to be trained as a Nepali interpreter since she speaks the language fluently, as do the majority of the organization’s clients. After graduation, “I continued working with different clinicians there as an interpreter in therapy and with different social workers as well,” she said. “And then, recently, in the last year, I got an opportunity to work with the same clinicians to co-lead group work for middle school and elementary school students. They have been mostly Nepali groups of youth, but I’ve also been working with a multicultural group.”

Within these groups Lama taught emotional and social skills alongside the therapists, in addition to providing a space for the students to discuss their experiences at home and school, as well as the difficulties that accompany navigating different cultures.

“Although I worked with a much younger population, there was a lot of holding space for our students to be able to talk about a lot of different things related to their identity and experiences, and helping to really empower them with their identity,” Lama said. “And so that’s very much similar to what I’m going to be doing here [at CMAS], except with older students.”

Post-graduation, Lama held two additional positions, one with the Champlain Housing Trust and the other with the Champlain Valley Office of Economic Opportunity (CVOEO). In the former, she worked to coordinate care for homeless individuals during quarantine and isolation after they contracted COVID-19. “As part of my job, I needed to check in people and check them out. But also, I helped coordinate care alongside social workers for those who needed a little bit extra support during their time at the quarantine facility,” Lama said.

In the latter position she worked in one of the largest homeless shelters in the state after the emergence of COVID-19. At times she worked as shelter staff, sometimes overnight, and during the day she worked as a case manager, again addressing the needs of the homeless individuals the shelter was serving.

Given that much of her post-graduation work centered around COVID-19, Lama was looking for a new opportunity as the state of the pandemic continued to improve. As a student she had worked closely with Sarah Childs (who previously worked at the Mosaic Center before becoming the Director of CMAS at Saint Michael’s), so when Childs reached out to her, encouraging her to apply for the position at CMAS, Lama was immediately intrigued. “I just knew that I enjoyed working with students and I remember this type of job and this type of work really resonating with me,” Lama said.

With the long-term goal of getting either a master’s in social work or a master’s in clinical psychology to work as a therapist for immigrant communities, Lama believes that CMAS will provide her with crucial experience.

“I think this job will give me great experience working with so many different populations as well as diverse backgrounds, especially in terms of advising, and a little bit of counseling too if students are in need of emotional support. I’m doing very meaningful, rewarding work,” Lama said.

Beyond her busy professional life, Lama enjoys singing, dancing, eating, being out in nature, and participating in community.

“I’ve always liked Indian and Nepali cultural performances, singing and dancing. I’m really into both because I went to a performing arts high school,” she said. “Also learning about different cultures and trying out food from different cultures is a big hobby of mine. I’m a big foodie.”

She also loves hiking and spending time by the lake, and hopes to get into more outdoor winter activities in the future. “I’ve been in Vermont for five or six years,” she said, laughing, “but I still haven’t done a lot of winter sports!”

Lama currently lives with her parents and sister in Essex Junction, but also has a lot of family in New York who she enjoys visiting. “Anytime I have a break, I go down for a visit. There’s a big Nepali community there, and several Himalayan communities as well,” she said. “I have always been a big community person. I have grown up in lots of strong communities, and I really find importance in being in a community, especially strong cultural communities.”