Purpose from place and mentorship: The Saint Michael’s Farm 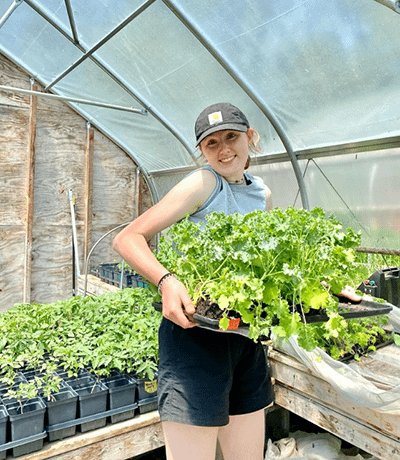 Eliza Byrne ’24 at work on the Farm recently.

The Farm in its present, intentionally educational form was not a major aspect of Saint Michael’s College when the institution began in 1904, even though a farm in some form helped sustain the campus community with staples through much of its early history.

However, since formal establishment of a campus organic garden in 2008 followed by a more expansive farm, student-centered agriculture and horticulture has become a fundamental part of the College’s culture of green living and learning, Edmundite tradition, and the most popular program within the Center for the Environment.

Eliza Byrne ’24 of Hebron, CT is an environmental studies major and a summer Farm employee at Saint Michael’s College. Alongside Byrne’s work on the Farm, she is a Natural Area steward through the Center for the Environment during the academic year. She is currently staying on Saint Michael’s campus over the summer while she works full time on the Farm.

The Farm greatly influenced Byrne’s decision to attend Saint Michael’s. “It’s so cool and different, and a lot of schools don’t have the close-knit community and educational Farm that Saint Mike’s does,” she said. “Once I took the Farm and Food Intensive course with Christine Gall, I was all-in on the farm program, because Christine is just a cool human being to be around,” Byrne said of the Center’s project coordinator, assistant farm manager and instructor. “The way she goes about teaching on the Farm is super engaging. She makes it exciting even though sometimes weeding sucks.”

Byrne started working on the Farm in the spring of her sophomore year at Saint Michael’s. After taking the Food Systems & Sustainable Agriculture course in the fall semester with Professor Krystin Achilich, director of the Center for the Environment, she finally got to dig deep on the Farm in the spring while taking Gall’s Farm and Food Intensive course. Byrne said that Farm student employees and interns do “everything under the moon” on a typical day — “small tasks like weeding and watering crops to transplanting, which is basically taking seedlings and putting them in the ground, rerouting irrigation, harvesting, and also processing and packaging CSA orders.”

The Community Supported Agriculture (CSA) program, Byrne said, is a program through which members can sign up with different price points and receive fresh food every week from the Farm at Saint Michael’s. “After we do our harvest, pack, and wash on Wednesdays, we put together all of the CSA orders. Then on Thursday those who put in an order can come pick it up at the Farm office,” Byrne said. She also spoke about how the Farm sends a lot of food to Sodexo, the dining manager for Saint Michael’s. “A lot of times we’ll send spinach, mixed greens, or any kind of excess yield to Alliot, so Saint Mike’s students can have access to farm-fresh produce,” she said.

The Farm is open to students of all majors, students in the program are mostly STEM-based majors, according to Byrne. “Usually volunteer days during the school year and summer will draw a really big variety of [majors] because it’s just something different for people to do,” she said, “but typically the people who are taking Farm courses are STEM majors.” STEM is a common acronym for Science, Technology, Engineering, Mathematics.

Shirts with the Farm logo are available to student workers, as work by the gentleman in green.

In terms of future career, Byrne is considering two different tracks within the food system. She is torn between putting her environmental studies degree toward farm management, or potentially, on the culinary side of the food system, helping local farms move their products and “better integrating community members into their own food system.” Byrne’s work on the Farm has greatly influenced what she wants to do for her career. “The idea of industrial scale, corporate farming is something I now know I don’t want to do,” she said, attributing this realization to her time working on the Farm at Saint Michael’s.

Byrne made sure to credit her mentors who work with her and other students on the Farm throughout the year in fostering her interest in the work. “I want to gain experience in the field because it’s something I’m so passionate about and something I want to pursue in my post-college career… when you’re on the Farm you never know what’s going to happen. It’s about having an open mind and being willing to learn. Christine makes it super easy for that to happen,” she said. “A big goal of mine is to experience and learn as much as I can because there’s so much to learn and Christine Gall and Kristyn Achilich make it so exciting to be on the Farm every day.”

Byrne experiences joy in bringing plants up from seeds to produce. She brought strawberries home from the Farm to her roommates, and seeing how happy it made all of her roommates made her feel proud of her work on the Farm. “I’m not super fond of doing things like weeding or mowing because in the moment it just seems time-consuming, but at the end of the day there are so many things on the Farm that need to be done… and it looks ten times better,” she said. “I would do anything for the Farm.”