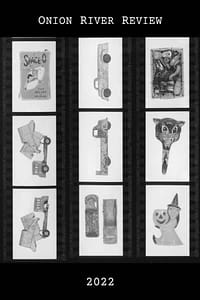 Art
The Onion River Review encourages submission of photography, painting, and other media for publication. Digital files may be emailed to onionriver@smcvt.edu. Other media may be submitted at Saint Edmund’s Hall, Room 329, or it may be mailed to the following address:

Literature
The Onion River Review accepts submission of poetry, prose, scripts, and other literary forms. To submit your work, email onionriver@smcvt.edu with your work in the body of the email, or with a Word file attached. If you are unable to submit your work through email, you may submit through the process outlined above.

Other
The Onion River Review enthusiastically accepts mixed-media work such as calligraphy that do not fit into the categories above.

The Onion River Review is first and foremost an artistic outlet for the greater Saint Michael’s community. We accept submissions from students, faculty, staff, alumni, and our neighbors in the Burlington area.

Each submission is read anonymously. Each editor reads every submission, thus each submission is guaranteed to be read more than once. Contributors may submit with the confidence that their work will be given all due consideration.

The Onion River Review takes its name from the river that runs near campus: Winooski means “onion” in the language of the local Indian tribe, the Abenaki. The review has existed in various formats since 1973, when the first edition appeared in sixteen mimeographed pages, with a trippy psychedelic drawing on the cover.

Before The Onion River, there was a long history of student literary activity at Saint Michael’s. The oldest record dates to 1906, two years after the founding of the college. That was when the Saint Edmund’s Literary Club began meeting every other week, aiming “to perfect our English by presenting to the meetings compositions by ourselves, or by reading or by elocution.” Annual dues were five cents. Meetings began and ended with a prayer, Father Nicolle presiding. Fathers Jean-Marie and Alliot were among the first judges of the performances.

In the first years, the proceedings of the new club amounted to a kind of literary review. Members’ compositions were preserved in a hardbound book, handwritten in flowing penmanship, often with pen-and-ink sketches by the authors. Some of the presentations are accompanied by anonymous criticism. “Mr. A. Bombardier gave the story of ‘Two Queer Englishmen.’ There was evidence of effort having been put into his composition, but we expected more from Mr. Bombardier.”

Before long, the book became a chronicle of sports scores and events at the college, a sort of early yearbook. Its literary mission seems to have been taken over by a publication called Purple and Gold, put out by the Newman Lyceum, which was founded at the college in 1908 “to discuss literary, social, and religious topics.” This magazine, too, was something of a miscellaney, containing quips and quotations as well as observations on campus life. “Early to bed and early to rise,/And you will meet none of the regular guys.” “We would remind Mr. Manette that he is not to say the prayers in Chapel with the same rapidity as he translates Greek in Class.” But there was always a “Poet’s Corner” where original compositions were published.

Purple and Gold was succeeded in 1936 by another all-purpose publication, The Lance, which appeared at first in a slick magazine format, complete with advertisements from national cigarette companies. Featuring the caption “The Student Writers of Saint Michael’s College,” it eventually became a small quarterly, containing poems, essays, and movie reviews as well as sports commentary and campus wisdom (“Don’t forget, the keynote of good breeding is B natural”).

The sixties brought a more focused literary effort—The Quest, which proposed the “rebirth of a literary magazine on the campus of St. Michael’s.” In the first issue (1961), the editors asked, “Where are our Faulkners, our Hemingways?” For ten years The Quest appeared in the shape of one of the classic “little reviews,” containing essays and reviews as well as poems and stories. The final issue in the college archives, dated 1970, includes black-and-white photographs and artwork. And then the literary impulse on campus seems to have gone unpublished for a few years, until the birth of The Onion River Review in 1973.